Carlsen, the reigning champion, was declared the winner after beating Caruana in the first three games in the best-of-four quickfire tie-breakers.

Carlsen will now hold onto the title for at least another two years.

The win will go down in history, as it came after 12 classic chess games between the pair ended in a draw — something never before seen.

“I’m really happy. I felt like I had a very good day at work today,” Carlsen said following his victory.

The draw in match 12 was so rare and unexpected that it perplexed chess grandmasters, including Judit Polgar, widely considered the world’s greatest female chess player of all time.

Polgar told Euronews earlier on Wednesday the match was getting “more stressful and difficult the more tired the players get.”

“Both players are extremely defensive if needed, and give very little chance to the opponent. They are at the level where a little chance is not enough to gain an advantage,” Polgar said. 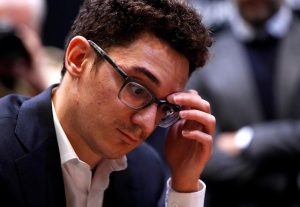 Carlsen’s victory means Caruana missed out on becoming the first American champion since 1972.

“Obviously I’m disappointed. The idea is to win world championships not just play in them,” Caruana said following the match.

“This was a hard fought match to the end, and I want to congratulate Magnus on defending his title. I was up against one of the most talented players in the history of chess, and I gave it everything I had,” he said in a statement.

Speaking of the players’ differing styles, Russian grandmaster Sergey Karjakin, 28, told Euronews: “Caruana is not a player who enjoys playing seven-hour matches which end in draws. But Magnus wants to play an endgame even if its boring, but if he has little chance for a win he welcomes the seven hours of playing.”

The games between Carlsen and Caruana have been described as “bizarre” by commentators.

In the fourth game, Caruana’s preparation leaked online sparking speculation in the chess world. Many thought this would give Carlsen an advantage, but the draw’s kept coming.