“Recent reports that the President called for an increase in the U.S. nuclear arsenal are absolutely false,” Mattis said in a statement. “This kind of erroneous reporting is irresponsible.”

The NBC report suggested that Trump’s surprising request caused Secretary of State Rex Tillerson to call the president a “moron,” part of another report which both the secretary of state and the president have criticized for inaccuracies.

Trump rejected Wednesday’s report as fake news, calling NBC out on Twitter and putting them on the same level as CNN, which the president has repeatedly attacked for its false reporting.

Fake @NBCNews made up a story that I wanted a "tenfold" increase in our U.S. nuclear arsenal. Pure fiction, made up to demean. NBC = CNN!

“It is frankly disgusting the press is able to write whatever it wants to write,” he said, adding that a number of outlets are writing stories based on sources that simply do not exist.

Trump explained that, while he expects the U.S. to maintain top-notch nuclear capabilities, he believes that a substantial tenfold increase in the size of the nuclear arsenal would be excessive and unnecessary.

Something important came out of it. It’s time to discuss pulling the licenses of some of these FAKE NEWS organizations 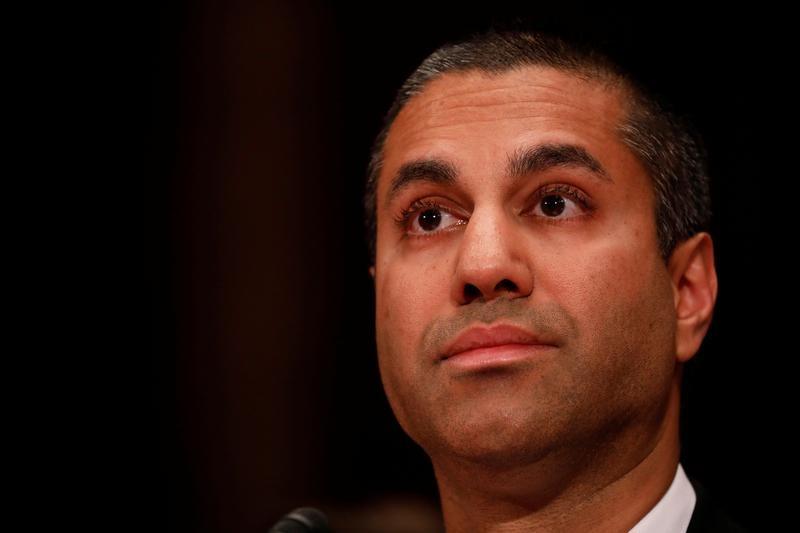 Pai, who was reconfirmed last week for a new five-year term at the Federal Communications Commission and named chairman by Trump in January, has been urged by members of Congress to denounce Trump for a proposal that has little, if any, chance of success.

That is because the commission does not actually license broadcast networks or cable stations and the hurdles to denying licenses to individual stations are extremely high.

Trump’s remarks on Wednesday that threatened to muzzle the media and fellow-Republican Pai’s strong support for press freedoms could conflict as Pai mounts ambitious plans to overhaul federal communications regulations.

Trump said in a Twitter post: “Network news has become so partisan, distorted and fake that licenses must be challenged and, if appropriate, revoked. Not fair to public!”

His ire was raised by an NBC News report that said he had called for a massive increase in the U.S. nuclear arsenal, a report Trump denied. Trump and his supporters have repeatedly used the term “fake news” to cast doubt on media reports critical of his administration, often without providing any evidence to support their case that the reports were untrue.

Pai’s office has declined to comment, despite Reuters’ repeated requests Wednesday and Thursday.

The FCC, an independent agency, does not issue licenses to individual networks but to local stations, including those directly owned by broadcasters such as Comcast Corp (CMCSA.O) that owns NBC. Comcast and NBC declined to comment on Trump’s remarks.

Pai has defended the First Amendment and press freedoms. In October 2016, he said anyone at the FCC “has the duty to speak out whenever Americans’ First Amendment rights are at stake.”

In a 2014 Wall Street Journal piece, Pai said “the government has no place pressuring media organizations into covering certain stories.”

Pai has an ambitious agenda, which he is expected to unveil details of in the coming months. It includes proposing to eliminate some significant media ownership restrictions and a plan to roll back former Democratic President Barack Obama’s so-called net neutrality rules.

Senator Tom Udall, a New Mexico Democrat, said on Twitter Trump’s comments were “unacceptable attacks on the #FirstAmendment by @POTUS. @AjitPaiFCC committed to Congress to speak up at times like this. We are waiting.”

“I‘m for the First Amendment. I don’t always agree and like what you guys write, but you have a right to do it,” Ryan said.

Republican Senator Ben Sasse asked if Trump was “recanting” the oath of office to defend the First Amendment.

In March, Pai told the U.S. Congress he did not agree with Trump when he said that “the media is the enemy of the American people.” Pai said he would act independently of the White House on media-related matters.

Last month, Pai lamented that people on Twitter demand “the FCC yank licenses from cable news channels like Fox News, MSNBC, or CNN because they disagree with the opinions expressed on those networks. Setting aside the fact that the FCC doesn’t license cable channels, these demands are fundamentally at odds with our legal and cultural traditions.”

O’Reilly on this FAKE NEWS