It’s obvious the left wants the American people to have sympathy for members of the Islamic religion. Unfortunately for them, it seems that there was a bit more to the clip they recently released, showing a few Muslims after a bombing. On closer look, there was just one thing that many people missed – and it changes everything.

The incident purportedly took place in a hospital in the Syrian city of Aleppo, which is actually the self-proclaimed capital of the Islamic State. It is the central point for much of the fighting in the Middle East.

As Barack Obama continues to fund the Syrian rebels and Putin continues to help Syrian President Bashar al-Assad, the country is in turmoil. With bombs going off daily, there is quite a bit of collateral damage with civilians being injured and killed every day.

However, the leftist media would have you believe things that just aren’t true, such as them wanting us to believe that the religion of Islam is not at all responsible for this mess. Instead of acknowledging the ideology behind the destruction, they show videos, like the one below which was recently released, that are supposed to pull on the heart strings of ill-informed Americans in hopes of sympathizing with the Muslims over there.

Unfortunately for them, it seems as though at least one pair of keen eyes was able to pick up on something that not too many people saw – and all you have to do is keep your eye on the guy on the right. As can clearly be seen, the man is smiling until, that is, he notices that the camera shifted to his direction.

When he notices the camera, the man acts as if he’s in excruciating pain although he had been grinning broadly just a second before, leaving many to believe the “shocking” clip was nothing more than a scripted scene full of actors. The leftist media wants you to feel bad for these people because these are the people who Obama has decided to back. 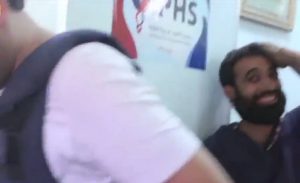 However, the truth of the situation is that the problem isn’t so much one side or the other as much as it is the religion of both sides. Of course, they happen to belong to different factions of Islam, but they both want the same thing – their faction to rule supreme over not just the other but all the world.

The religion of Islam is firmly rooted in death as their so-called “holy” book calls for the killing of everyone who doesn’t believe. Ironically, followers of the murderous religion believe that even includes other Muslims who don’t practice the religion the way they believe they should, thus a civil war results with both sides claiming to fight for the same cause.

If the Middle East wants to pull itself out of turmoil, it’s going to have to do away with the root cause – Islam. Muslims have been killing others and even themselves since the 7thcentury now, and they are clearly showing no signs of stopping. Until they get over their savage ideology that causes ongoing death, destruction, and war, I say we stop sending them money to help with their barbaric and murderous causes. What’s more, we have to stop giving sympathy to either side as they both essentially want the same thing – their worldwide Islamic Caliphate, which is only achieved through the deaths of all those who disagree.