Everyone who’s been in business more than 3 hours knows there are losses, from the grocery store owner having to throw away old vegetables because it’s no longer fresh to old car dealership down on the corner selling cars with loss. All kinds of shops are forced to cut prices of items and sometimes even sell products with loss, that also happens in real estate. Often it’s not dramatic at all, it’s just a sale, sometimes it’s the end of a business. 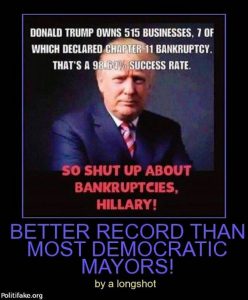 C.E. Dyer writes that President Obama’s words on the campaign trail have come back to bite him. In this case, his words chastising then-President Bush over the national debt can easily be used to criticize his own presidency, and then some.

The Washington Examiner reported that the federal debt passed the $19.5 trillion dollar mark last Wednesday, a number that is a huge blight on the Obama administration.

Let’s take a trip back in time and see what then-Senator Obama had to say back in 2006 about Bush and the federal debt: “The fact that we are here today to debate raising America’s debt limit is a sign of leadership failure.”

That’s funny, because leadership failure is a great way to describe the last eight years…

In 2006, Obama was criticizing Bush for a $3.5 trillion increase in the debt over the first five years he was in office. Fast forward ten years and take a look at the debacle that has been the Obama administration: during his tenure, the debt has risen $8.9 trillion.

The left will, of course, find a way to spin this in Obama’s favor and against Bush, but no dice. When Obama took office in 2009, the debt sat at $10.7 trillion. It is now nearly twice that number.

Obama has had eight years to put a dent in what he himself called “a sign of leadership failure,” but the policies he chose to implement have made things worse.

Here are some more words from Obama in 2006 about the then-Bush debt that now squarely rest on Obama’s own shoulders:

“We now depend on ongoing financial assistance from foreign countries to finance our government’s reckless fiscal policies. We now owe $1.3 trillion to China and $1.1 trillion to Japan. To every foreign country combined, America owes $6.2 trillion.”

The Examiner reported the stark truth about why the national debt is such a crucial concern:

“This Labor Day, it is worth considering how rising debt hampers the nation with increasingly high interest payments, which cut what can be spent on anything else. Washington will spend $255 billion on interest payments in 2016, and that number will triple in the next decade. The nonpartisan Congressional Budget Office says that by then, 31 cents of every dollar that workers pay in personal income taxes will go to debt service.

There is no tax hike realistically acceptable that could reverse this trend. According to the Tax Foundation, even if marginal income tax rates were raised by one-fifth across the board, let alone just on the rich, it would increase revenue by only $3.5 trillion over 10 years, even in the highly unlikely event that such a tax hike created no economic downturn.”