Chancellor Angela Merkel has vowed to fight the populist Alternative for Germany (AfD) in Sunday’s Berlin election and was met with boos at her own rally.

German Chancellor Angela Merkel is taking no chances ahead of Sunday’s election in Berlin. Merkel has vowed to fight the anti-mass migration AfD, getting directly involved in the regional campaign.

The Chancellor has called on her supporters to counter the “lies” spread online by AfD supporters, but may face significant challenges as she was met with boos at her own rally, reports B.Z. Berlin.

Some 1,500 people gathered to see Merkel speak ahead of the Berlin election as she campaigned for her Christian Democratic Union party (CDU) and its Berlin leader Frank Henkel. Chants of “Angie must go!” and “Go Away!” filled the Kranoldplatz square as protesters told Merkel that she and her migrant policies, which have become extremely unpopular in Germany, were not welcome. 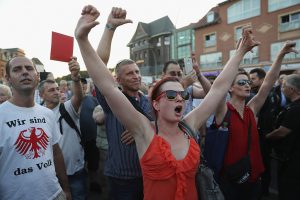 Right-wing hecklers yell ‘Merkel must go!’, ‘Get lost!’ and ‘Homeland, Freedom, Tradition!’ while standing just outside an election campaign rally of the German Christian Democrats (CDU) as German Chancellor and CDU Chairwoman Angela Merkel spoke at the rally ahead of Berlin state elections on September 14, 2016 in Berlin, Germany. (Credit: Sean Gallup/Getty)

Merkel spoke to the crowd of a need for “solutions that hold our societies together”, referring to her party as the centre of German politics.

Later on that day she spoke to German broadcaster RBB and laid out her plans on how to counter the rise of the AfD who pummeled her CDU into third place in regional elections in her home state of Mecklenburg-Vorpommern earlier this month.

The Chancellor told the broadcaster that supporters of the AfD don’t reflect the majority of the German public and that much of what they post online were lies saying, “we really can’t give them any opportunity to spread their lies” on social media.

“Right now it’s hard to reach some people with reasoning and still we have to keep trying again and again,” Merkel said in regard to the AfD supporters adding, “I believe that we shouldn’t give up on people who are now casting a protest vote, but rather keep courting them with our policies.”

Leader of the AfD, Frauke Petry, fired back at Merkel saying that although the masses of recent migrants referred to her as “Mutti” or “Mother Merkel”, her never actually raising children gave her a severe lack of perspective.  “Kids help you see beyond your own periphery. And that’s what Merkel doesn’t do,” Ms. Petry said.

According to Ms. Petry the real goal of the AfD was to replace the CDU as the party of the German people. “In the mid-term, it’s on us to take the CDU’s place as a people’s party,” she said.

Along with migrant policies, multiple acts of prolonged left-wing violence in the German capital, where earlier this year they set fire to shops and cars, could also push voters to the AfD. The same extremists have physically attacked AfD members and offices, burning cars and trashing their Berlin headquarters in February.