When a Muslim teacher objected to students being shown footage of the September 11 attacks, she didn’t get the response she expected from the school.

A Muslim teacher interrupted a video about the September 11 attacks, objecting to what students were learning about the Islamic terrorist attacks. However, as soon as she made her demand clear that she didn’t want students learning about the very “offensive” subject matter, the school responded with a demand of their own.

Every year when September rolls around, Muslims resume their whining about Islamophobia and alleged fear that the anniversary of the most significant terrorist attack in U.S. history will bring about criticism of Islam. Such is the rhetoric each time Muslims brutally slaughter in the name of Allah. Of course, if Muslims were half as concerned with condemning and acting against the jihadists committing these atrocities in the name of their religion, people would probably believe them when they say that these butchers have nothing to do with Islam.

When UK teacher Suriyah Bi, 24, was expected to teach students at Heartlands Academy in Birmingham about the 9/11 attacks, we could’ve predicted she’d raise hell over the issue since it paints Islam in its true light. However, few could’ve prepared for the perfect way the school reacted to her entitlement and bullying.

The Daily Mail reports that Suriyah interrupted a video detailing the 9/11 attacks, in which Muslim terrorists flew 2 planes into the World Trade Center, using the excuse that the lesson was too offensive for the 6th-grade students. While it’s probably safe to say that Suriyah was more offended that the lesson portrayed Islam in its rawest form, the school accepted her argument. Unfortunatley for her, she didn’t get the response she was expecting.

The school told Suriyah that she will teach the lesson as she was hired to do or they will find her a permanent replacement. Apparently, Suriyah thought that the school was bluffing, so she stood her ground. It was then that she was shown the door. 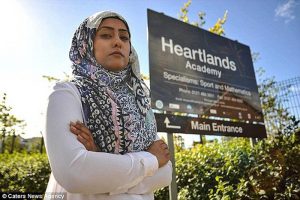 Suriyah Bi, 24, was fired for refusing to teach 6th graders about the 9/11 terrorist attacks.

“I was in the classroom when the video was shown and I quickly objected. Later, I was told to leave the school,” Suriyah explained. “There was an investigation into the matter but I was dismissed for making a whistleblowing complaint.”

Of course, the entitled Muslim is now suing the Heartlands Academy, claiming that her termination was a result of “unfair dismissal and religious discrimination,” according to the Metro. In fact, the video she claims was the entire reason for her firing wasn’t even mentioned during the preliminary hearing, making this case seem more like retaliation against the school the most effective way Muslims know how — by claiming racial or religious discrimination.

“It was shown to some 30 children during class. I understand the video was shown without the permission of the authorities,” Suriyah claimed. “It raised questions about what safeguards there are in schools to protect children. These were children aged 11, of whom many knew little, or nothing, about the 9/11 horror. They were subjected to graphic scenes and some were shocked and upset. The video not only showed the plane crashing into the Twin Towers but also showed people committing suicide by jumping to their deaths from the tower blocks.”

Perhaps the most ridiculous claim Suriyah made was that watching footage of the attacks can “induce them to kill themselves,” she said, referring to middle school students.

Fortunately, the school is sticking by their decision to fire Suriyah for refusing to do her job. On top of this, Heartlands Academy is considering counter-suing Suriyah for causing delays and frivolous costs with her unfounded claims.

Of course, many of us who were still children when these attacks occurred remember how watching the horrific footage made us feel — and it certainly wasn’t suicidal like Suriyah absurdly claims.

Witnessing the attacks made many of us unite against terrorism and search for ourselves what Islam really teaches. Unfortunately, we found that the same barbaric slaughter perpetrated by the cowardly jihadists on 9/11 is not only repeatedly commanded in the Quran but was identically modeled by their prophet.

Muslims would like us to forget the purest example of modern-day Islam, just like they want us to stop exposing their religion’s violent fundamentals. Thankfully, there are still those of us who never will.