IT’s time for sensible, democratic governments to push back and vigorously question the motives of unelected, bureaucratic behemoths at the UN, ruinously  corralling global taxpayer money to fund their socialist and globalist agendas that have absolutely nothing to with “saving the planet” or helping the environment.

QUEENSLAND One Nation leader, Steve Dickson conveying what most Australian’s are feeling, in stark contrast to the major ruling parties who are both pandering to UN climate gods …

It's time for real leaders to step up, take charge and look after Australia and Australian's first. #UnitedNations #Trumphttps://t.co/8fPUtca5is

A MUST read opinion piece on the corrupt United Nations by Maurice Newman, former head of Deutsche Bank, the ABC and ASX…

“Australians are at that point, sick of being lectured to by UN “special rapporteurs”. They are crying out for leaders to stare down faceless bureaucrats in Geneva. They are angry at meaningless gestures and slavish obedience to pointless emissions targets that are crippling our industry and causing personal hardships.“

Corrupted UN must never be allowed to lecture us 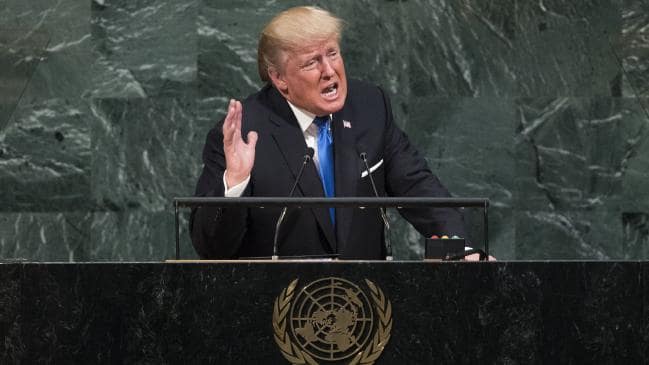 If the leaders of some nation states were citizens living in a civilised society, they would be in jail for perpetrating, or being accessories to, murder, torture, theft and corruption.

Yet they and their chosen representatives shamelessly take their place in the hallowed chamber of the UN General Assembly as arbiters of how the rest of the world should behave.

Take the Human Rights Council, which counts among its members the Democratic Republic of the Congo, where Joseph Kabila’s unconstitutional rule features massacres and gender-based violence among a long list of atrocities; and Venezuela, where President Nicolas Maduro strangles political opposition by carrying out hundreds of arbitrary killings under the guise of fighting crime.

There’s The Philippines, whose President Rodrigo Duterte condones policies that result in extrajudicial killings of suspected drug dealers; and Cuba, where President Miguel Diaz-Canel, in true Castro style, allows beatings, public shaming and termination of employment to quell political opposition. China’s President-for-life Xi Jinping oversees the holding of about a million Muslim Uighurs, including women and children, in re-education camps.

Yet this year Australia celebrated its membership of the UNHRC, while the US commendably withdrew, saying the council “has provided cover, not condemnation, for the world’s most inhumane regimes”.

Australia is also a member of the Economic and Social Council which, “to find effective approaches to ending poverty”, believes “those experiencing it must have a seat at the table’’. And so they do. The leaders of Algeria, Chad, El Salvador, South Africa, Sudan, Togo and Venezuela, to name a few, all believe in wealth redistribution. They practise authoritarian central planning and asset confiscation.

Not too many champions of competition and market economics there. Australia acts as a good global citizen, lending support for “collective action” that rewards bad behaviour.

Unsurprisingly, the UN’s Ecosoc readily accepts that “climate change and environmental crises are the result of vastly unequal levels of development in the last few centuries. The countries which are now rich became so by ignoring the consequences for the environment which now threaten the entire planet.” Ecosec reminds us of Agenda 21, put to the UN’s 1992 Rio de Janeiro Earth Summit, which recognises that the burden of climate change (whatever that may be) “falls most heavily on poor countries”.

Masterminded by Canadian socialist/Marxist and multimillionaire Maurice Strong and held under the auspices of the UN Framework Convention on Climate Change, the Rio summit was the largest political gathering in history. Strong believed the UN should become a world government with “environmentalism” the key driver. He believed: “The concept of national sovereignty … will yield only slowly and reluctantly to the new imperatives of global environmental co-operation. It is simply not feasible for sovereignty to be exercised unilaterally by individual nation states, however powerful.”

Journalist and long-time UN expert Claudia Rosett observes Strong understood how the “UN’s bureaucratic culture of secrecy, its diplomatic immunities, and its global reach, lends itself to manipulation by a small circle of those who best know its back corridors”.

Strong exploited this culture to ensure climate change became so embedded in global politics that few Western politicians would have the courage to challenge it, no matter how exaggerated its claims, or the financial cost. And so it has proved. His successor and fellow Marxist, Christiana Figueres, led the Paris climate conference that captured Australia.

Enter US President Donald J. Trump. In his second address to the UN General Assembly in September, Trump said: “America is governed by Americans. We reject the ideology of globalism and accept the doctrine of patriotism.”

He said the UN Human Rights Council had become a “grave embarrassment” and that countries admitted to the WTO “violate every single principle on which the organisation is based”. He said: “We will not allow our workers to be victimised, our companies to be cheated, and our wealth to be plundered and transferred.” He withdrew from the Paris climate agreement, calling it a “massive redistribution of United States’ wealth to other countries”.

In the 26 years since the Rio summit, no world leader has posed such a comprehensive threat to UN hegemony. Not only does Trump reflect disillusionment with globalism at home, he also taps into growing disenchantment with supranational governments in many places around the world, particularly in Europe.

Brexit was the first example. Italy’s defiance in the face of Europe’s rejection of its draft budget is the latest. While acknowledging Italy violates EU rules, Deputy Prime Minister Luigi Di Maio says: “This is the first Italian budget that the EU doesn’t like. I am not surprised. This is the first Italian budget that was written in Rome and not in Brussels.” A recent poll in Poland found a third of the country now backs an EU exit.

It is clear serious cracks in the relationship between the people and governing bodies like the UN and the EU are emerging. People may not fully understand the way remote, supranational governments work, but they can recognise authority which is harmful and lacking in integrity.

Australians are at that point, sick of being lectured to by UN “special rapporteurs”. They are crying out for leaders to stare down faceless bureaucrats in Geneva. They are angry at meaningless gestures and slavish obedience to pointless emissions targets that are crippling our industry and causing personal hardships.

The latest Australian Institute of Company Directors survey confirms the desperation corporate leaders feel over the government’s inept response to climate change, the No 1 issue they want addressed.

The UN and agencies like the IMF have been exposed as hypocritical emperors without clothes. If this is a preview of world government, we face a grim future.