The liberal media has been on the attack against Trump for lewd comments he made over a decade ago, but Trump’s words have been NOTHING in comparison to Bill Clinton’s actions. Democrats attack Republicans for standing behind Trump, yet they support a man who didn’t just SAY vile things, he DID them!

Hillary Clinton is just as guilty when it comes to treating women poorly. In fact, she is his enabler and the chief protector of their abuser.

This outrage is totally justified. Here is a list of just a few women whose lives have been ruined by Bill and Hillary Clinton.

claimed in a ’60 Minutes’ interview that Bill Clinton had sexually assaulted her during a Oval Office meeting in 1993.

Said Mr. Clinton propositioned her in 1984 while she was sunbathing by a Little Rock hotel pool.

Gubernatorial campaign volunteer who said Mr. Clinton raped her during a nursing-home-operators convention in Little Rock in April 1978.

English woman who said Mr. Clinton sexually assaulted her after she met him at a pub near Oxford University where Mr. Clinton was a student in 1969.

Former Washington, D.C., political fund-raiser who said Mr. Clinton invited her to his hotel room during a 1991 campaign trip, pinned her against the wall and put his hand under her dress.

In 1972, a 22-year-old woman told campus police at Yale University that she was sexually assaulted by Clinton, a law student at the college.

In 1974, a female student at the University of Arkansas complained that then-law school instructor Bill Clinton tried to prevent her from leaving his office during a conference. She said he groped her and forced his hand inside her blouse. She complained to her faculty adviser who confronted Clinton, but Clinton claimed the student ”came on” to him.

Alleged that Mr. Clinton took her hand, pulled her towards him, then said: ‘I love your curves.’

She tried to walk away, she said in a deposition, but ‘Mr. Clinton then walked over to the sofa, lowered his trousers and underwear, exposed his penis (which was erect) and told me to “kiss it.”‘ …

‘There is no way that [Hillary] did not know what was going on, that women were being abused and accosted by her husband,’ she says. ‘They have both lied.’

After lying to the American people to keep the Oval Office affair secret, Team Clinton and the DC Media ganged up on this 21-year-old intern to smear her as a crazy stalker.

Flowers, who had a 12 year affair with Clinton, claims that Hillary Clinton ran a “war room” against her during the 1992  campaign, the goal being to “smear, defame, and harm” her in order to win the presidency. 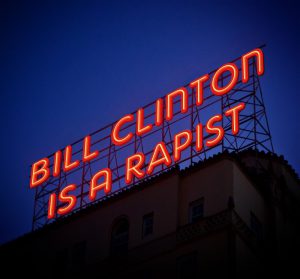