A favorite tactic employed by leftists is to describe the Nazis as “right wing,” with Adolf Hitler, their leader, as the grand leader of this “right wing” movement. Rewriting history is pretty common for leftists, as their history is littered with injustice (the KKK was founded by Democrats, did you know?). Injustices they claim to fight against today. Awkward.

But thanks to this nifty thing called “history” in combination with “the internet,” we can bust this myth once and for all. Thoroughly. Or until a leftist insists on ignoring it. Then we’ll hold them down and tape their eyes open. Just kidding, that’s only what a leftist would do. For those who’d rather watch this column in video form, there’s one below. For those who prefer reading, yuck. But scroll down.

Adolf Hitler wasn’t “right wing.” If you take nothing else from this post, just remember Hitler was a socialist. With terrible facial hair. There’s an easy way to remember it, too. NAZI stands for National Socialist German Workers‘ Party. Associate it with blunt mustaches.

What does National Socialist German Worker’s Party mean? Glad you asked. Is it different from “Democratic socialism”? Only in semantics. A Democracy is mob rule, which is why America is actually a constitutional, representative republic, NOT a democracy. A representative republic protects the minority from the majority, whereas a democracy is the rule of the majority. Leftists get caught up in words, getting tripped up over “National Socialism” as opposed to “Democrat Socialism.” But it’s just that. Semantics. So when Hitler ginned up hatred for the Jews, he could get the mob to agree with him. He could get the mob to believe him. There were no representatives to stop Hitler. He was one man helming the desperation of a majority of people. Spot the difference?

When we examine Hitler’s Nazi Germany through the lens of history, most, if not all of us, think of the Holocaust. In fact the holocaust might be the only thing we associate with Hitler’s Nazis. We’ve all been told of the Jews being marched off to death camps where they were worked, tortured, then gassed. We’ve also heard of the experiments conducted by Hitler’s Dr. Mengele. All terrible practices which we rightly find horrifying. Unless you’re one of those people who think Planned Parenthood is great.

What we don’t often hear or learn about is how Hitler ruled the rest of Germany, what his domestic policies were for the German people he didn’t march off to death camps. Hitler’s domestic, socialist policies will be the focus of this post. Trigger warning: they’re eerily similar to what American Democrats tout today. Double trigger warning? He initially had the support of the mob of people. So replace many of Hitler’s policies with something you hear from Bernie Sanders…

Germany lost World War I. As such, Germany was in a state of economic and national depression. Not totally unusual for losing a giant war. But the depression was a long, drawn out one (15 years) leaving the German people poor, hungry, desperate, lacking any confidence. Then along came a young man named Adolf Hitler…

Hitler was a powerful and spellbinding speaker who attracted a wide following of Germans desperate for change. He promised the disenchanted a better life and a new and glorious Germany. The Nazis appealed especially to the unemployed, young people, and members of the lower middle class (small store owners, office employees, craftsmen, and farmers).

Human beings may advance technologically, but spiritually? Not so much. In fact I’d contest we rarely learn our lessons when choosing our leaders. Especially charismatic ones. If a man (or woman) can speak eloquently, with confidence, we cannot help but be enthralled. We often follow along, like the town’s children following the pied piper.

After that depression, Hitler made a huge promise to his people: employment for all. How did he do it? Roads and infrastructure:

As Fuhrer, Hitler’s first priority was jobs, or the lack of them. German unemployment had peaked at 6 million due to the Depression devastating the economy. With innovative public works schemes such as the building of autobahns, Hitler put every German back to work. He also advocated schemes such as KdF – Strength Through Joy – which gave workers increased benefitsfor increased levels of production. This policy was popular and increasingly with the proletariat who had seen their country decimated by the depression…

By putting people back to work and making huge public spending, inflation was bound to happen. However, Hitler kept this under control by not allowing wages to rise with prices. This may have been one unpopular aspect of Hitler’s economic policy but there were many that the people supported.

So Hitler created jobs…through government. While at the same time, he criticized certain segments of the population, demeaning them, blaming the countries woes upon them. The rich, they just ruin everything. Sound familiar?

If you haven’t seen it yet, go watch WW2 Survivor’s Account Draws Chilling Similarities between Nazism and Liberalism.

When the mothers had to go out into the work force, the government immediately established child care centers. You could take your children ages 4 weeks to school age and leave them there around-the-clock, 7 days a week, under the total care of the government. The state raised a whole generation of children. There were no motherly women to take care of the children, just people highly trained in child psychology. By this time, no one talked about equal rights. We knew we had been had.

Public education, where children are at school all day long, with state-funded and state-sponsored curriculum… convinced yet?

Also from the WW2 Surivor’s accounting of Nazism:

After Hitler’s health care was socialized, free for everyone. Doctors were salaried by the government. The problem was, since it was free, the people were going to the doctors for everything. When the good doctor arrived at his office at 8 a.m., 40 people were already waiting and, at the same time, the hospitals were full. If you needed elective surgery, you had to wait a year or two for your turn. There was no money for research as it was poured into socialized medicine. Research at the medical schools literally stopped, so the best doctors left Austria and emigrated to other countries.

As for healthcare, our tax rates went up to 80% of our income. Newlyweds immediately received a $1,000 loan from the government to establish a household. We had big programs for families. All day care and education were free. High schools were taken over by the government and college tuition was subsidized. Everyone was entitled to free handouts, such as food stamps, clothing, and housing. 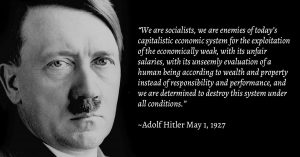 The @GOP has been rolling over after being called fascists and Nazis by @TheDemocrats for decades. That ends now: https://t.co/dWk4dDgtJO pic.twitter.com/PJCVZfhMXW