Hydrogen could provide an alternative to battery power, Tomohiro Ohsumi/Getty

The accidental discovery of a novel aluminium alloy that reacts with water in a highly unusual way may be the first step to reviving the struggling hydrogen economy. It could offer a convenient and portable source of hydrogen for fuel cells and other applications, potentially transforming the energy market and providing an alternative to batteries and liquid fuels.

“The important aspect of the approach is that it lets you make very compact systems,” says Anthony Kucernak, who studies fuel cells at Imperial College London and wasn’t involved with the research. “That would be very useful for systems which need to be very light or operate for long periods on hydrogen, where the use of hydrogen stored in a cylinder is prohibitive.”

The discovery came in January, when researchers at the US Army Research Laboratory at Aberdeen Proving Ground, Maryland, were working on a new, high-strength alloy, says physicist Anit Giri. When they poured water on it during routine testing, it started bubbling as it gave off hydrogen.

That doesn’t normally happen to aluminium. Usually, when exposed to water, it quickly oxidises, forming a protective barrier that puts a stop to any further reaction. But this alloy just kept reacting. The team had stumbled across the solution to a decades-old problem.

Hydrogen has long been touted as a clean, green fuel, but it is difficult to store and move around because of its bulk. “The problem with hydrogen is always transportation and pressurisation,” says Giri.

If aluminium could be made to effectively react with water, it would mean hydrogen on demand. Unlike hydrogen, aluminium and water are easy to carry – and both are stable. But previous attempts to drive the reaction required high temperatures or catalysts, and were slow: obtaining the hydrogen took hours and was around 50 per cent efficient.

The new alloy, which the team is in the process of patenting, is made of a dense powder of micron-scale grains of aluminum and one or more other metals arranged in a particular nanostructure. Adding water to the mix produces aluminium oxide or hydroxide and hydrogen – lots of it. “Ours does it to nearly 100 per cent efficiency in less than 3 minutes,” says team leader Scott Grendahl. Moreover, the new material offers at least an order of magnitude more energy than lithium batteries of the same weight. And unlike batteries, it can remain stable and ready for use indefinitely. 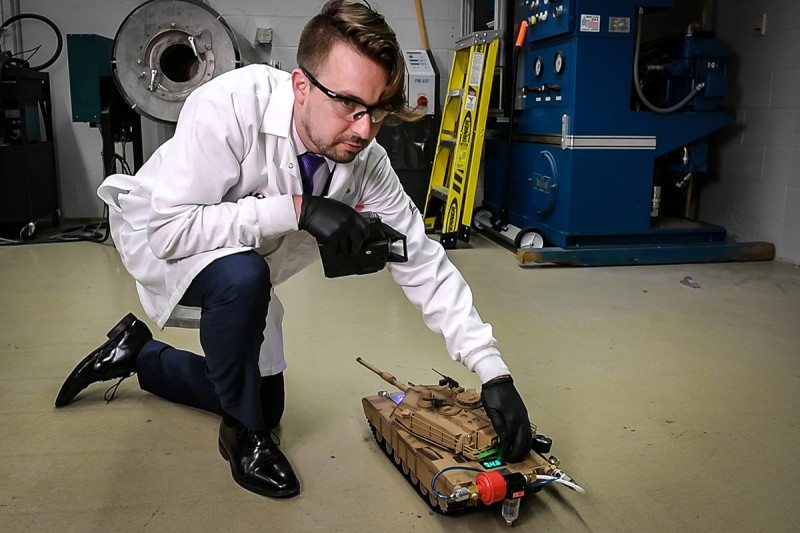 The army team has used the material to power a small, radio-controlled tank. Grendahl doesn’t see any practical issues with scaling up production to produce hundreds of tonnes of the stuff as it can be made from scrap aluminium, which is relatively cheap. The new material could power everything from laptops to buses and cars.

“In principle, the process should work,” says Robert Steinberger-Wilckens, who directs a fuel cell programme at the University of Birmingham, UK.

But he cautions that a repeat experiment is needed to show that the reaction works the way it should. “There’s a lot of stuff that works in the laboratory but not in the field.”

If it does pan out, the powder could also be used as the raw material for 3D printing. The researchers have put forward proposals – now being considered by the army – for small air or ground robots that use their own structure as fuel. These self-cannibalising machines would be useful for one-way intelligence-gathering missions, burning themselves up at the end to leave no trace.