A report from NASA claiming natural shifts in the moon’s “wobble,” will combine with climate change to increase coastal flooding in the 2030s, is prominently featured on Google News today in a search for the term “climate change.” The report, published in Nature, wrongly points to climate change as contributing to expected increases in incidences of flooding. The media unquestioningly follows NASA down this false path. Data show that any contribution of climate change to sea level rise in the next one to two decades will be minuscule, on the order of millimeters, and less than two centimeters at worst. This is within the margin of natural sea level rise and certainly far below any detectable contribution of climate change to moon induced flooding beginning in 2030.

The headline from the Washington Post’s story covering NASA’s report, “Moon ‘wobble’ and climate change could mean ‘double whammy’ of flooding in 2030s, NASA warns,” matches the tone of the coverage by other mainstream media outlets. NPR, for instance, writes:

“A new study on high tide flooding predicts that the mid-2030s could be catastrophically wet in U.S. coastal regions — and it could stay that way for an entire decade. Flooding at high tide, often called nuisance flooding, already occurs with regularity in many coastal communities as water routinely sloshes into streets, yards and businesses. Two factors could converge to worsen flooding at high tide, the study says: rising sea levels fueled by climate change — and the moon.”

The moon, yes. Climate change, no!

This moon’s wobble (also called lunar standstill) shifts approximately every 18.6 years. The moon is currently in a cycle in which high tides are lower and low tides are higher than average, but this is about to change. NASA reports the moon is approaching a shift in its nodal cycle, which will amplify high tides, making them higher, as well as making low tides lower. This will contribute to more nuisance flooding beginning around 2030 and lasting for possibly more than a decade. This cyclic shift would happen regardless of any contribution humanity might be making to sea level rise.

While NASA and the media covering its report claim that climate change enhanced sea level rise will exacerbate the flooding, data does not support this. As explored in Climate at a Glance: Sea Level Rise, tide gauge data proves average global sea levels have been rising at a relatively steady pace of approximately one foot per century since at least the mid-1800s. And data from satellites confirm, there has been very little recent acceleration in sea level rise. Assuming all of the modest increase in sea level rise is due entirely too alleged human-caused global warming, that amounts to an acceleration of only 0.3 inches of sea level rise per decade on top of the preexisting 1.2 inches of sea level rise per decade. 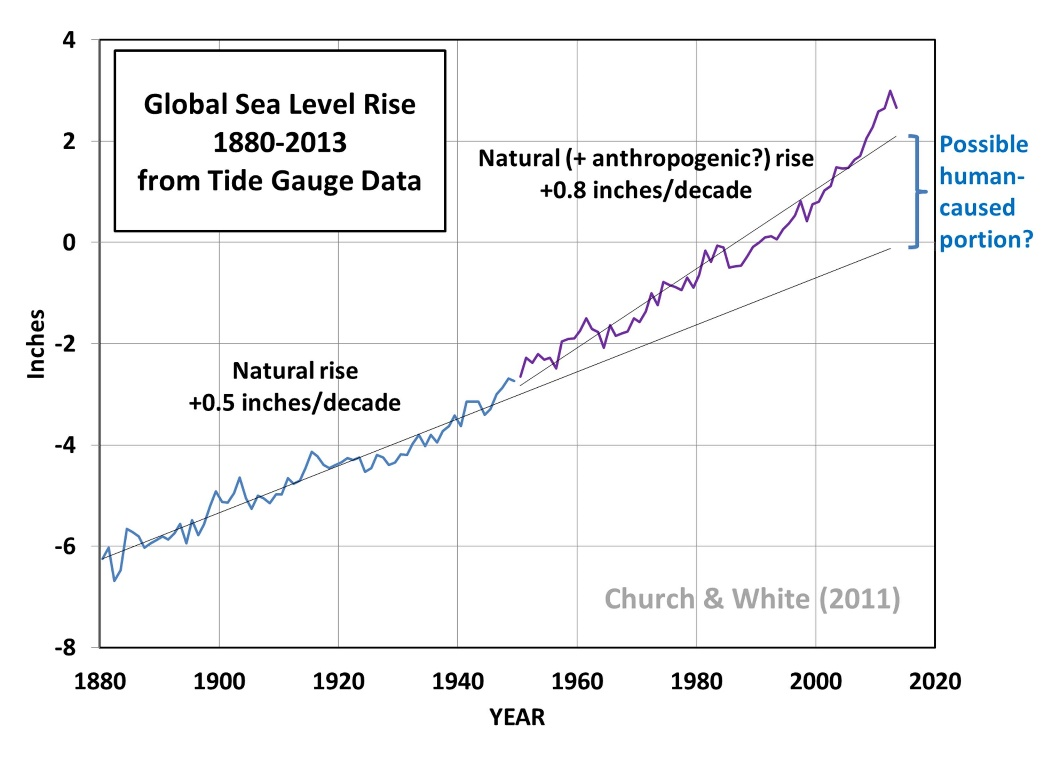 With at most a third of an inch contribution to rising seas by 2030, climate change won’t be significant contributor to any increased flooding that occurs when the moon’s wobble shifts to a new cycle.

NASA uses word play, or in this case, time shifting, to make it seem climate change will play a significant role in high tide flooding when the moon’s wobble shifts around 2030. The paper’s main discussion focuses on the impact of the moon’s shift on flooding in the 2030 to 2040 time period. However, when climate change’s contribution to sea level rise is discussed, NASA shifts to discussing the National Oceanic and Atmospheric Administration’s (NOAA) estimates of sea level rise in 2100.

NOAA’s low and intermediate projection of sea level rise in 2100 is half a meter to 1 meter respectively. This says nothing about sea levels today when compared to 2030. There will be 70 years of rising seas difference between 2030 and 2100, for those not paying attention. The difference between current sea levels and sea levels in 2030, will be about an inch at current rates of rise, with any climate change enhanced contribution to that being immeasurable. Ignoring the shifting time-lines, NASA also fails to acknowledge that NOAA’s 2100 projections fail to distinguish between expected natural sea level rise and the share of sea level rise supposedly attributable to human caused climate change.

The media, in reporting on NASA’s study, ignores the agency’s intentional shift between discussing high-tide flooding in 2030, and sea level rise in 2100, when, by the way, the moon’s wobble should be in a low-high-tide/high-low-tide cycle.

We should expect better from taxpayer financed researchers at NASA than to try and tie possible future flooding from a moon induced tidal shift a decade from now to a discussion of climate change. Also, we should expect better from NPR, the Washington Post, and other media outlets, than reporting whatever alarming spin NASA puts on its research as if it were a fact, without first checking the data. Full article at climatereralism.com.

This one picture falsify the whole (Man Made) Global Warming, melting ice and snow leads to rising sea level nonsense. In the picture below the only word you can use, if you’re honest, to describe the sea level situation is the word “Stable”! That is exactly the same situation when it comes to temperature, stable! 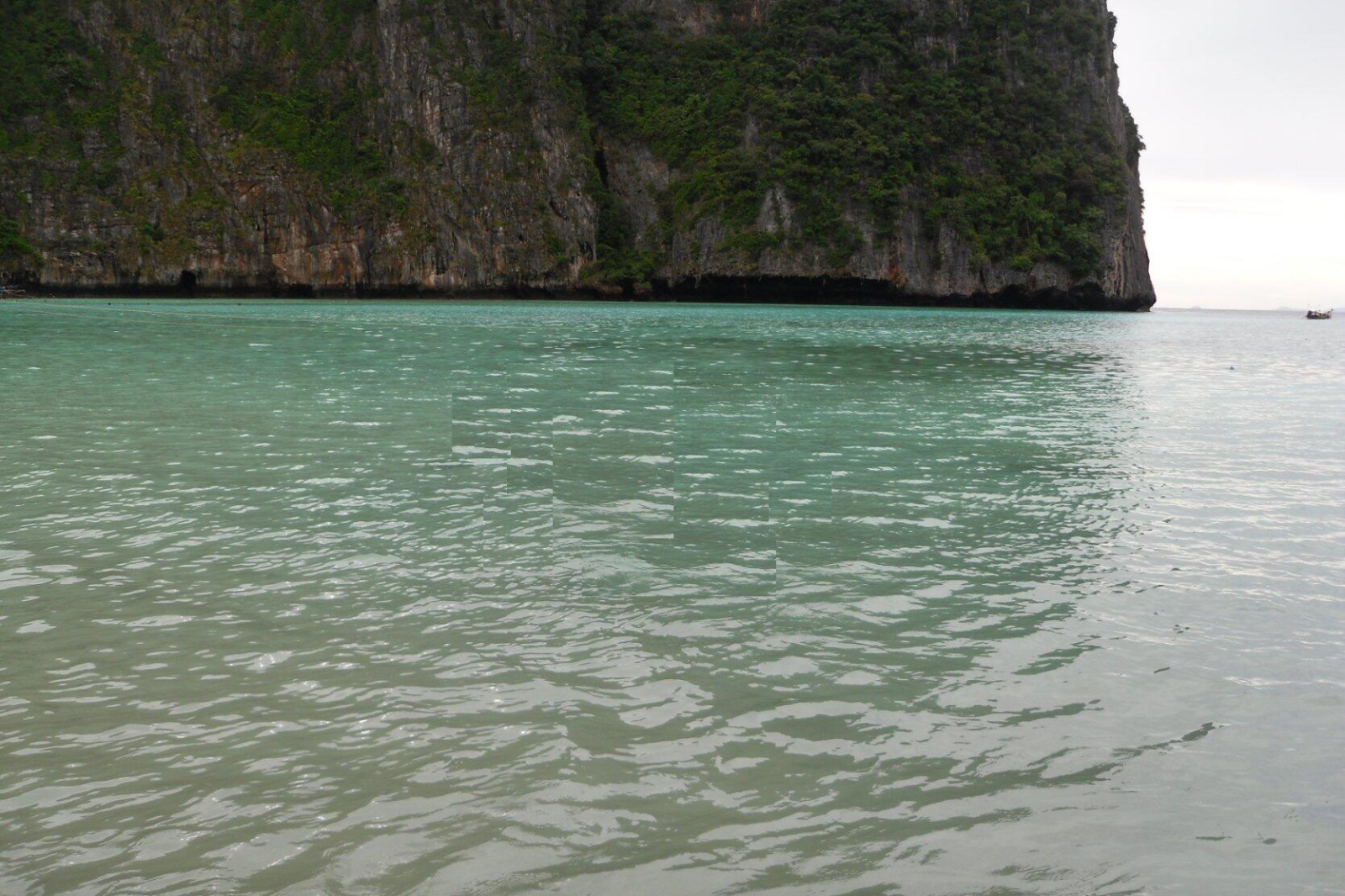 Climate lockdown: ‘It’s Time To Ban The Sale Of Pickup Trucks’ – ‘Shift away from relying on private vehicles entirely’