One significant change in the Arctic region in recent years has been the rapid decline in perennial sea ice. Perennial sea ice, also known as multi-year ice, is the portion of the sea ice that survives the summer melt season. Perennial ice may have a life-span of nine years or more and represents the thickest component of the sea ice; perennial ice can grow up to 4 meters thick.

NASA have been up to their tricks again. (Click on the Telegraph to watch the video)

The first con is that, although the video runs monthly progressions since 1984, it finishes in September 2016. Subliminally, you will have seen much larger extents of ice rolling through earlier years, simply because you are looking at winter and other months when extent is much greater anyway. Then, when the video stops at the end, you see the minimum extent for the year, and it is this which sticks in the memory.

This really is a cheap trick, not worthy of a supposedly scientific organisation.

But what has actually happened to multi year ice?

This year, ice older than two years accounted for less than 10% of the ice cover at the end of February. From 1981 through 2000, such older ice made up an average of 30% of the total sea ice cover at this time of the year.

And in large part this was because wind and currents swept this thick ice out of the Arctic Basin, where unsurprisingly it all melted. This was what NSIDC said in August 2007:

Another aspect of the story for 2007 is the “memory” of the sea ice to changes over the past few decades. Specifically, there seems to have been a transition to younger, thinner ice beginning in the late 1970s. This reflects not only trends towards more summer melt and less winter ice growth, but changing winds that have transported fairly thick ice out of the Arctic Ocean into the North Atlantic, and decreased the length of time that ice is “sequestered” in the Arctic Ocean where it might have a chance to grow thicker.

It is no secret that thin, new ice tends to easily melt come the following summer. Consequently, it takes time to rebuild the thicker ice.

Mysteriously, this graph was not published in April this year. Instead the version below appeared, totally contradicting the original data and showing much less older ice.

The real data did not support NSIDC’s agenda, so it had to be altered.

The myth that sea ice is getting thinner is exposed by DMI.

If we compare the DMI maps for 2016 and 2008, we can see much more thicker ice along the Canadian Archipelago. There was also a vast expanse around the pole of very thin ice in 2008. In contrast, the same area is full of two and three meter thick ice.

Although there a few areas with thicker ice in 2008, in overall terms ice appears to be much thicker now. (The clue lies in the ice volume, similar in both years; however, ice extent is much less this year, meaning thickness must also be greater).

In reality, Arctic extent has remained pretty much stable since 2007, and multi year ice is gradually recovering. But this not the story that NASA want you to hear. 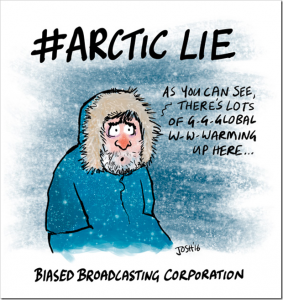