The Bulgarian parliament has officially banned the burka and niqab face covering, however, it’s the punishment for offenders that’s gained international attention.

After a mass outcry from citizens demanding the burka be banned, politicians finally responded by outlawing the full face covering and forcing all residents, regardless of religion, to show their faces. However, as monumental as the burka ban is in the fight against Sharia law, what lawmakers decided the punishment should be is even better.

While much of the Western world is appeasing the Muslim minority by recognizing aspects of Islamic law, Bulgaria made a bold move that’s halted the country’s Islamization in its tracks.

On Friday, Bulgaria’s parliament announced it had voted in favor of banning the wearing of face veils, citing that the covering of one’s face is a security risk. The legislation came as a response to an increase in Islamic terrorism and Muslim migrant crime throughout Europe. Although the ban itself is already a major move for any European country, offenders are likely more outraged at the subsequent penalty.

The Express reports that anyone caught wearing a burka or niqab in public in Bulgaria will not only be fined but will also lose their government benefits, which is bad news for the thousands of Muslim migrants making a career out of welfare. Offenders will be ordered to pay up to $860 per offense but they will allegedly lose their benefits the first time they break the law. 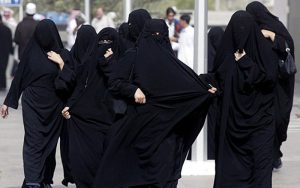 Muslims are prohibited from wearing the face veil even in mosques and will receive a fine and lose their government benefits if they refuse to show their face.

The law states that any clothing that conceals the face is prohibited from being worn in public institutions, schools, recreational areas, businesses, sports venues, and even houses of worship, including mosques. The ban applies not only applies to all people living in Bulgaria but even extends to temporary visitors and tourists. In short, the Islamic veil should be virtually unseen from now on in Bulgaria.

“The law is not directed against religious communities and is not repressive,” said Krasimir Velchev, a senior lawmaker for the ruling GERB. “We made a very good law for the safety of our children.”

Breitbart reports that Bulgaria has a 13-percent Muslim population, many of whom are Turkish Muslims who trace their ancestry back to the Ottoman Empire.

Of course, Muslims are already coming forward to whine about “religious intolerance,” a fundamental part of the Islamic laws they demand to be implemented in the countries to which they flock. However, while Muslims complain that disallowing them to wear the burka is oppressive, they force religious minorities in their own lands to adhere to oppressive Sharia law.

Mandatory covering the head or face is just a small aspect of Sharia law. Unfortunately, its allowance is often a harbinger for the Islamization of a non-Muslim country.

Sharia law rules nearly every aspect of life not just for devout Muslim followers but for anyone unfortunate enough to live under it. Homosexuals are executed, adulterers are flogged or stoned, and children are married off — all because Allah commanded it and the Islamic prophet Muhammad modeled it.

Sadly, by the time a nation realizes that Islam is taking over, they are already prohibited from fighting it. Unlike our constitutional right to free speech and expression, Islam is fundamentally opposed to such freedom. In fact, using speech that insults Islam, which includes everything from criticizing Islam’s savage nature to having a different opinion from that of the Quran, warrants the death penalty.

So, while leftists are busy defending the Muslim minority, that same minority is using the tolerance and freedom extended to them to implement the very law that prohibits their rights.