There has been some almost hysterical coverage over yesterday’s record UK temperature for February, set at Kew Gardens.

Inevitably climate change has been brought into the debate. 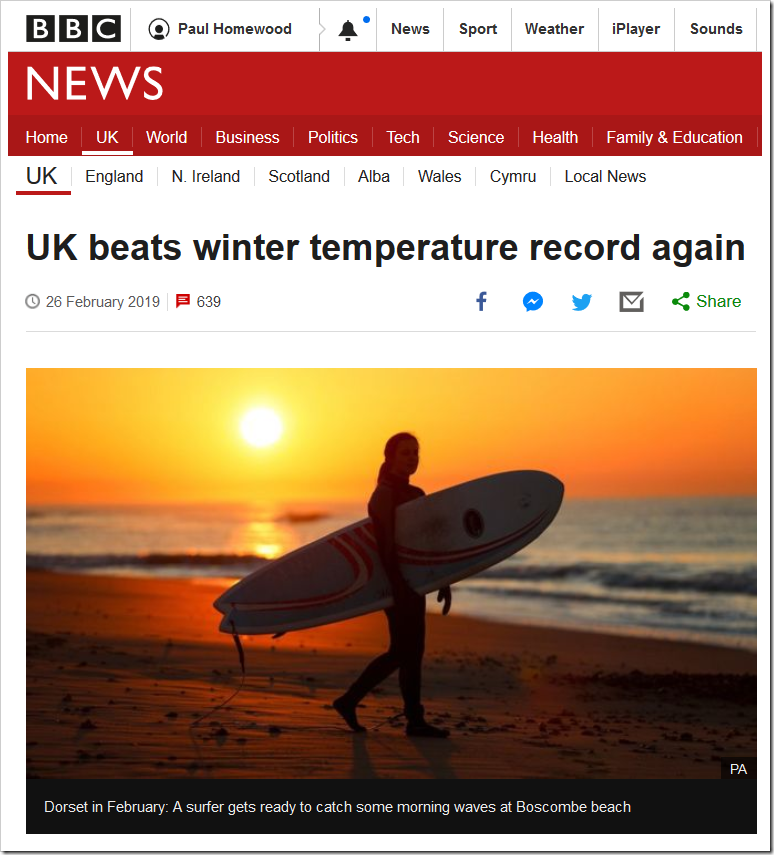 The UK has broken the record for its warmest winter day for the second consecutive day, with a temperature of 21.2°C in Kew Gardens, London.

Monday was the first time temperatures of over 20C had been reported in winter, breaking a record that had stood since 1998.

It means parts of Britain have been hotter than destinations such as Ibiza…..

The BBC Weather Centre said it was likely to be one of the warmest Februaries since records began in 1878….

Dr Friedericke Otto, acting director of the Environmental Change Institute at Oxford University, said people were right to ask themselves whether the record temperatures were being driven by climate change.

“I am very confident to say that there’s an element of climate change in these warm temperatures,” she said.

“But climate change alone is not causing it. You have to have the right weather systems too.”

BBC science editor David Shukman said scientists such as those at the Met Office were usually reluctant to link individual heatwaves, storms or floods directly to climate change without a specific study to prove it.

But he said research had shown that events like last summer’s heatwave were made more likely by the rising levels of carbon dioxide and other greenhouse gases in the atmosphere.

And on Monday, the BBC reported:

Caroline Lucas, the former leader of the Green Party, suggested the warm weather is linked to climate change.

She said: “I like spending an afternoon in the sunshine as much as anyone, but it’s impossible to shake the feeling that this isn’t right.”

He said: “Temperatures are twice what they would normally be at this time of year.

“Imagine if this was the summer and the temperature was twice what it would normally be, and you really begin to get an idea of how serious this problem could be.”

But at least we had a bit of common sense from the Met Office in that report:

“Met Office analysis of temperatures shows that British winters have become slightly milder over the past half century, a trend that’s set to continue. “

Note the word SLIGHTLY. And that just about sums it up. The weather we have had this week is just that, weather, which we would have had regardless. Without that slight amount of warming, maybe temperatures would have been half a degree lower, but it would still have been unusually warm and sunny.

But let’s take a closer look.

Daily temperature extremes are not especially meaningful in themselves. 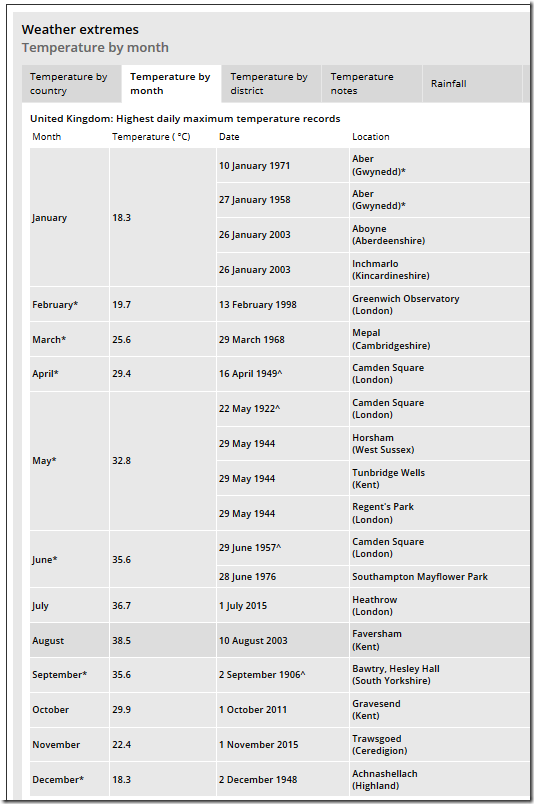 The simple fact is that the warm weather this week is the direct result of the meteorological set up, involving the jet stream pulling up warm air from the tropics, and high pressure sat to the east. 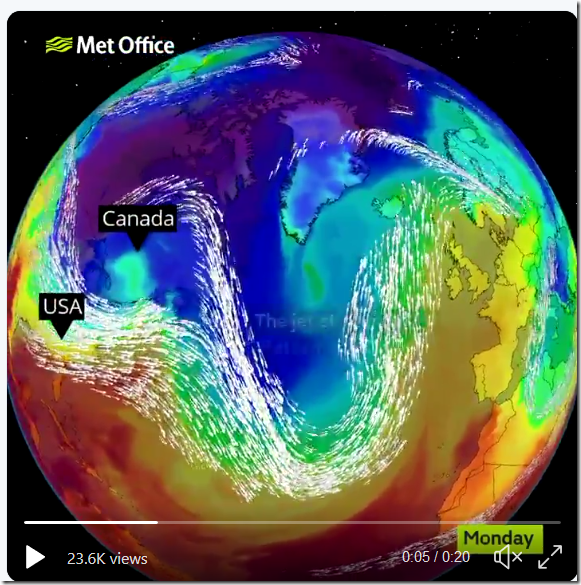 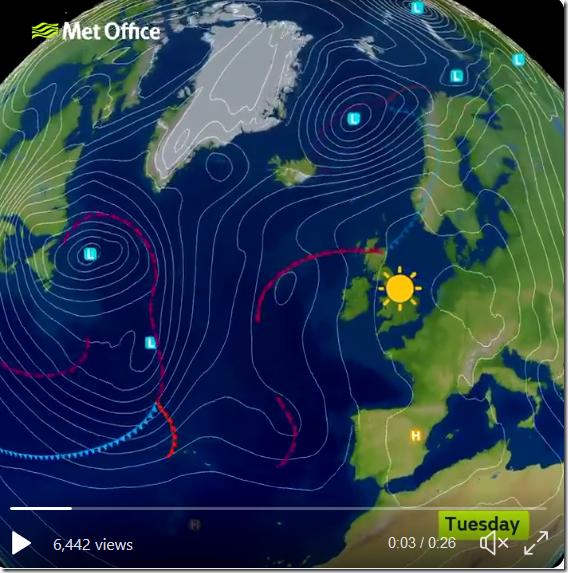 The high pressure is particularly significant, as there has hardly been a cloud in sight all week: 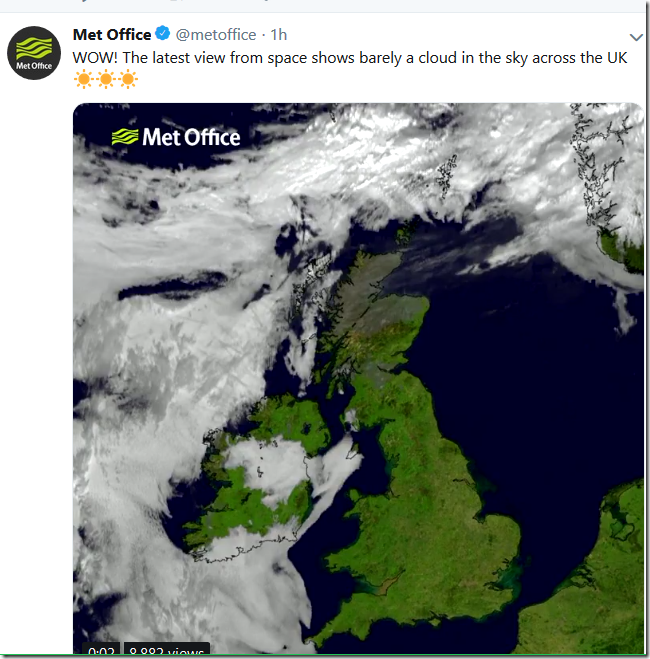 Although this is still technically winter, the sun is now high enough in the sky to impart a fair amount of heat, particularly when the skies have been so clear. 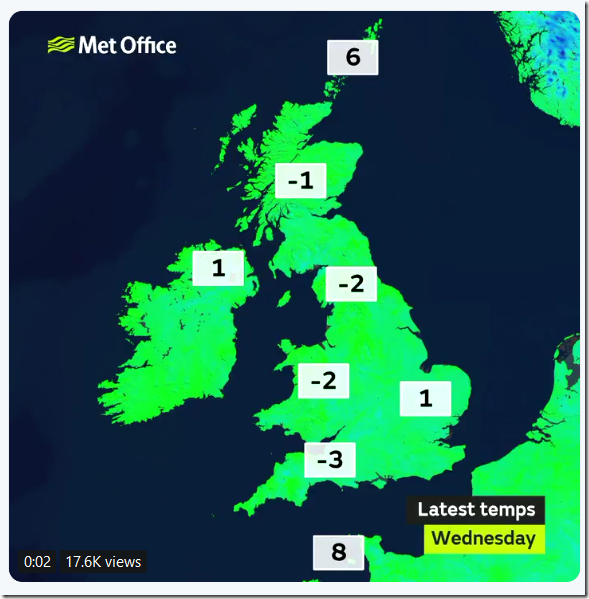 When we look at daily mean, instead of maximum, temperatures then, we get a much different picture. 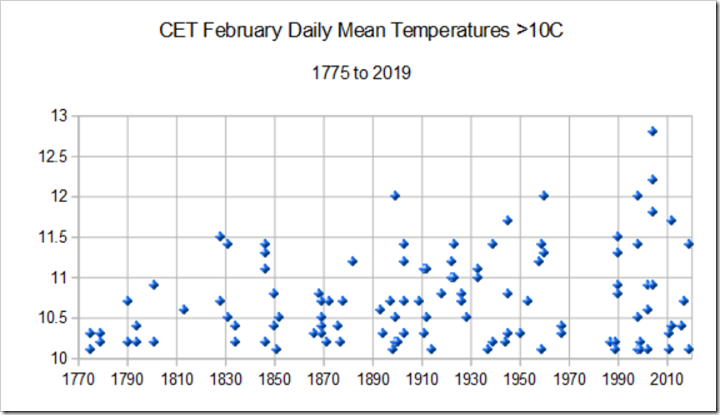 The mean temperature yesterday, the 26th, was 10.1C. The day before it was 9.1C. These are not unusual temperatures at all. (Indeed it reached 11.4C earlier this month, on the 21st, the only other day this month above 10C.)

We must also remember that the so called record UK daily temperatures, popularised by the Met Office, generally only signify “records” for the last 100 years or less. There are many more stations around now, where records can be set, than in the past.

The record set in 2003 at Faversham, for instance, is pretty meaningless as the station only has continuous since 1998. We simply don’t know if it was hotter there prior to that.

Even stations with longer term records, such as Kew, are corrupted by UHI.

Taking a longer term view over the month as a whole gives us a much more meaningful picture.

We can see that the warmest February was all the way back in 1779, with 1869 close behind, with monthly mean temperatures of 7.9C and 7.5C respectively.

Provisionally, February 2019 currently only ties for 9th place, at 6.9C. Although there are still two days to go, CET provisionals nearly always seem to overstate the temperature, so I would fully expect this month to drop further down the list.

So, despite attempts by the BBC and others in the media to hype it up, there is nothing of any significance about the warm weather this week.

The cold night time temperature is due to lack of latent heat (water vapor) due to drier air in the high pressure system, which is normally dry no matter what time of year they appear. CO2 is totally irrelevant, but if CO2 was to cause warming at daytime, it would also result in warming at night time, logically, but it is not, never will!