After all my years in public life I am sickened by the intellectual dishonesty, arrogance, and smugness of what Nassim Taleb calls the Intellectual Yet Idiots.

The IYI’s showed up immediately after the debate.

They stacked the deck against Trump with Lester Holt’s one-sided questions and interventions.

The Holt-Clinton team was glib, articulate, and self-congratulatory.  However, they lost.

Trump wins strategically because in a blunt, clear style, he is saying things most Americans believe. Trump’s opponents, including Holt and Clinton, felt good after the debate because their side was glib, articulate, and said things they and their friends believe to be true.

The Intellectual Yet Idiot class that dominates our news media fell all over themselves critiquing Trump and praising Holt and Clinton.

In doing so, they repeated the mistake they have made about every debate since August 2015.

Trump wins strategically because in a blunt, clear style, he is saying things most Americans believe.

Trump’s opponents, including Holt and Clinton, felt good after the debate because their side was glib, articulate, and said things they and their friends believe to be true.

The Intellectual Yet Idiot class is so out of touch with America that they don’t even realize how badly they are doing and how well Trump is doing.

Salena Zito is one of the country’s most perceptive journalists, in part because she is grounded outside of Washington and New York. Her column about the debate, “How Trump Won Over a Bar of Undecideds and Democrats,” should be required reading for everyone who wants to understand why Trump strategically won the debate.

This process of media elites and Washington insiders reassuring themselves that Trump lost while a variety of online polls showed him winning decisively has been going on since the very first Fox News debate in August 2015.

Trump has a hard time with media elites because they earn a living by talking. The media values glibness. In their world you can speak nonsense if you do it smoothly and convincingly.

Secretary Clinton is a professional politician. She has been campaigning as a volunteer, spouse, and candidate for 46 years (far longer than Trump suggested). She volunteered for Joe Lieberman’s state senate race in 1970. She and Bill worked for George McGovern in Texas in 1972. Secretary Clinton is also a Yale-educated lawyer. She combines Ivy League polish and arrogance with verbal smoothness and four decades of political speak.

Of course the Intellectual Yet Idiot insiders would pick Hillary. They share her passion for words without meaning, analysis without facts, and promises without performance. They are more than for her. They are her.

In fact, it is worth looking at a list of online polls to understand the gap between the elites and the vast majority of Americans. This list is long because I want to show you how willfully out of touch and dishonest the Intellectual Yet Idiot class is:

If you go to the Daily Mail, you can see that the list goes on and on.

Clinton won a handful of liberal sites with liberal audiences but she lost virtually everywhere else.

The elites can argue Trump does better in online surveys because his supporters are more energized, but that is a self-defeating analysis.

The lack of energy and enthusiasm for Clinton is a big problem for her.

In Iowa, the Democrats currently have one half the number of absentee ballots they’d received for Obama at this point in 2012. Polls in Iowa reflect a decisive Republican lead in a state Obama carried twice.

In Wisconsin, the Marquette University poll shows Clinton ahead by only 3 points.

In Minnesota, a poll which came out this week shows the race tied at 43-43.

If Clinton has to fight for Iowa, Minnesota, and Wisconsin, her campaign is in real trouble.

Trump is beginning to pull away and she has to stop the momentum.

On Monday night, she failed.

Trump won because he didn’t make a major mistake and he stuck to the facts.

I was proudest of him at the very end.

Hillary was vicious, nasty, mean-spirited, and arrogant. Look again at those final minutes.

Hillary knew there was almost no time left and so she rattled off a memorized rant about Trump insulting women. The look on her face is smug.

You could see Trump thinking.

He was really mad at the end of the debate with her cheap shot.

His natural pattern in Republican debates would have been to humiliate her with all of Bill’s accusers and her role as his defender and enabler.

It would have been powerful and ugly.

But he stopped. He thought, “This is not what a potential president would do, and I will not do it in front of Chelsea.” He responded as a president and not a candidate.

The media elite were thrilled that Hillary could be so mean and nasty.

The country will prefer a president with self-discipline and a sense of decency.

Trump is going to become president unless he makes a big mistake.

Clinton is going to lose again unless she turns the momentum around.

Monday night, Trump conveyed his core messages. He may have lost on glibness but he won on sincerity, empathy, and authenticity. 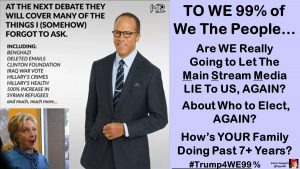