After Hillary Clinton’s historic loss to President-elect Donald J. Trump in November Democrats and their liberal allies blamed the defeat on Russia.

With little to no proof that any Russian involvement actually impacted the election, the Democrats continue to push the faulty narrative that it was a foreign government, not their flawed candidate that cost them the White House.

Well, with Christmas around the corner, cartoonist A.F. Branco hilariously imagines the Clintons blaming the Russians after receiving a lump of coal in their stockings! 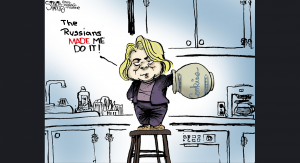