As the US weighs whether it should withdraw from the Paris agreement, a critical question is how effective have climate change policies been so far. A failure of the policies adopted until now doesn’t necessarily mean that future policies will likewise fail, but it will provide further evidence that decarbonizing is, well, difficult. And expensive.

One routinely hears comments that the US is the country most affected by climate contrarians / denialists, and that in other parts of the world (most notably Europe) this debate doesn’t exist, there is consensus about the need to act, etc. To quote a German citizen:

I take him at his word.

Germany is the country with the strongest consensus around the need to ‘do something’ about climate change. No other nation has started an ambitious a plan as Energiewende. The program started in 2000 and set an objective for 2050 – though bizarrely, as is common with these ‘plans’ and ‘roadmaps’, the objective is stated in absolute greenhouse gas emissions rather than the emission intensity of the economy. It’s easy to see the problem:

a) If emissions by 2050 are higher than the plan stated, advocates will claim that this happened because economic growth was stronger than expected. In other words: advocates could claim climate policies succeeded in making emissions lower than they would otherwise have been. Of course advocates of emission cuts never clarified how much economic growth they expected in the first place, so this claim is completely unfalsifiable.

b) If emissions by 2050 are the same or lower than the plan stated, advocates will claim success for the plan – even though the decline in emissions may in fact be due to economic crises and/or population decline.

Not to sound repetitive, but the only measure of progress that makes sense is the emissions intensity of GDP. In particular, how much this intensity declines per year. In this article I will show a positive number, i.e. how many more dollars of GDP per ton of CO2 emissions we get every year, as that seems more intuitive to me. I call it the decarbonization rate. I use CO2 emissions from combustion, as emissions of methane, ozone, N2O, and CO2 from land use are highly uncertain.

Anyway, let’s get back to Energiewende. We’re now 1/3 through the plan, so if it’s having any effect one should see:

b) That this rate is higher than in other countries, which presumably don’t care so much about climate action. Compared with the US the difference should be massive.

Here we can see US decarbonization since 1966, as emissions data starts only in 1965. We can see the same for Germany since 1971, as that’s when the country’s GDP data starts – at least in the World Bank’s website. 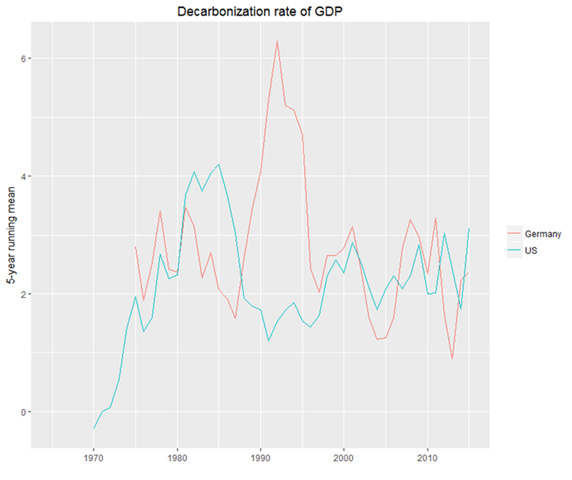 Ooops: now only is Germany’s rate about the same as the US’s, it’s also lower than it was before!

I guess the best one could say is that Germany’s decarbonization rate is about the same as before.

Just to be clear: a higher rate of decarbonization is the minimum one could ask of a climate policy. It’s necessary, but not sufficient, because it’s still possible for that policy to cost so much as to make the reduction in emissions not worth it. One shouldn’t automatically consider a higher rate of decarbonization better than a lower one. In other words, one has to consider cost-effectiveness – as with every other thing we spend money on.

In Germany’s case there is no point debating the cost-effectiveness of climate policies, because their effectiveness is at best zero.

Advocates of emission cuts are entitled to their own opinions, not to their own facts. If someone wants to make the case that climate policies have in fact been successful, whether in Germany or worldwide, he has to find fault with the numbers supplied by the World Bank and BP. If the data on fossil fuel combustion were significantly wrong, that would be big news. If the data on German (or global) GDP growth were significantly wrong, that would be huge news.

So proving that climate policies have worked is simple: prove the numbers wrong.

You could win a Nobel Prize.

Emissions data from BP can be found here. The 2016 version should be published in a month or so.

GDP growth data from the World Bank can be found here.

The calculations and plot used in the article can be seen here.

Shameless plug here: this is the fourth article in a series (not sure if it will continue). The first showed that there is little difference in the rate of decarbonization in Europe compared to the US., and little improvement over time either side of the Atlantic (except during periods of oil crises) That article left out Germany, as I thought (mistakenly) that the data would be a mess due to the reunification.

The second illustrated that:

a) The rate of decarbonization, worldwide, has actually declined since the Kyoto agreement in 1997.

b) Even if climate policies managed to increase this rate by 1% (essentially doubling it, as the historical average is only 1.1%), the difference in century-end temperatures would be only 0.38ºC

The third article likewise assumed that climate policies increased the rate of decarbonization by 1%, but applied this to historical data since 1979. In other words: if we had implemented effective decarbonization policies back then, what would be the difference in current temperatures? The answer is between 0.05º and 0.1ºC, depending on how much of the reduction in emissions corresponds to a reduction in CO2 concentrations.