He’s now claiming that people don’t like him because conservative media like Rush Limbaugh and Fox News created a “fictional” version of him.

No, Obama, they simply told the truth.

President Obama is leaving the White House in 29 days, but not before he takes a few more swings at the “conservative media.”

In an interview with The Atlantic‘s Ta-Nehesi Coates, entitled, “My President Was Black,” Obama claims that some of his critics over the last eight years only started lashing out at him thanks to how Fox News and personalities like Rush Limbaugh portrayed him.

And so when people criticize or respond negatively to me, usually they’re responding to this character that they’re seeing on TV called Barack Obama, or to the office of the presidency and the White House and what that represents. And so you don’t take it personally. You understand that if people are angry that somehow the government is failing, then they are going to look to the guy who represents government. And that applies, by the way, even to some of the folks who are now Trump supporters. They’re responding to a fictional character named Barack Obama who they see on Fox News or who they hear about through Rush Limbaugh.

In addition to destroying his image, Obama said Fox News is to blame for destroying the Democrats’ chances in the 2016 election. He made little mention of his unpopular policies that voters voted against (higher premiums with Obamacare, weakened international image, a PC culture), but lamented to Rolling Stone that Fox was simply on too many TV screens.

And as for the argument these networks turned him into a fictional character, I’d have to disagree. Some of this stuff you just can’t make up. 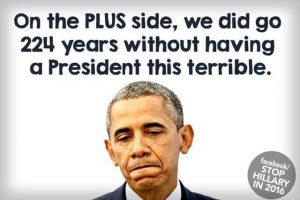