If Democrats didn’t cheat they would never have had any presidents, even JFK had to cheat to be allowed into the White House and he was so bad they had to get him killed. Because Democrats cheat so much, they always ends up with candidates negotiating (not a decision made based on votes) who’s to be the candidate to run against the Republican, and then the cheating continues. “Swing-states” only mean states allowing massive cheating to be going on, no photo ID., dead people voting, pre-printed and filled out ballots for the Democrats candidate the criminals think should win. This is how Obama ended up in the WH and crooked Hillary as Secretary of State. When a candidate has to cheat he / she is not a good candidate, as history has proven, they are terrible candidates and even worse as presidents.

The Pennsylvania secretary of state’s office recently sent out 2.5 million postcards to licensed drivers who were not registered to vote, inviting them to sign up in time for the November election.

Trouble is, some of those drivers are not American citizens.

One of them was Christopher Staab’s wife, who is a legal U.S. resident but not a citizen. He said he inquired about the matter and was told that his wife got the notice because a Department of Motor Vehicles employee in Butler County coded the information incorrectly. He said the state should ensure the accuracy of its information before inviting millions of people to register.

“Why would you rush this mailing right before an election if it’s not recorded properly?” he asked. “What is going on is not OK.”

Staab said he spoke directly with Secretary of State Pedro Cortés but did not come away satisfied.

“He basically said most are honest,” he said. 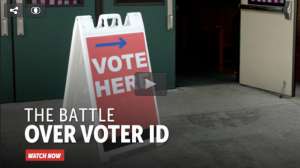 The Battle Over Voter ID

Officials from the secretary of state’s office did not respond to inquiries from LifeZette. But Cortes told a state House of Representatives committee last week that seven people had informed the department that they improperly received voter registration postcards. Critics said the state makes no effort to verify the the citizenship status of people who register. A recent investigation by the Public Interest Legal Foundation turned up 86 non-citizens who had been registered to vote in Philadelphia from 2013 through 2015 — including some who actually had cast ballots.

In almost every one of those cases, city elections officials removed the names from the rolls only after the voters self-reported.

“There’s certainly the potential for hundreds, if not thousands, of foreigners here legally and illegally to be on our voter rolls, and a certain percentage who are casting ballots,” he told LifeZette. “We’ve got a lot of integrity issues that need to be addressed.”

Logan Churchwell, a spokesman for the voter-integrity group True the Vote, said any ballot cast by someone who is ineligible unfairly cancels out the vote of a citizen.

“What we really focus on is how do we fix the problem?” he said.

Churchwell said the reason Pennsylvania mailed out the notices is that it was a condition of joining the Electronic Registration Information System, a nonprofit consortium that now includes 20 states and the District of Columbia. The ERIC system helps states identify and remove registered voters who have moved or died.

Ericka Haas, a systems engineer  and technical liaison at ERIC, said the organization also helps states remove non-citizens. But she said it is up to each state to identify non-citizens on its rolls.

“As to how they’re known, that’s up to each state,” she said.

Churchwell accused ERIC of secrecy since it makes states sign contracts requiring them to remove certain information from public view. He said a non-ERIC state, like Texas, can quickly determine and report how many dead voters were removed from the rolls within a certain date range. But he said ERIC states no longer provide that information when asked by members of the public.

“You have ERIC putting up walls where before there used to be none,” he said.

Motor-Voter Faulted
Metcalfe said neither ERIC nor state officials ever told legislators that sending notices to non-voters would be a condition of joining the consortium. He said it exposes the state to the possibility — and now proven fact — that people could be illegally registered through fraud or error.

The National Voter Registration Act of 1993, better known as the motor-voter law, requires everyone applying for a driver’s license to be offered a chance to register to vote. He said there is no way to flag fraudulent or even mistaken applications.

“You can see where someone whose first language is not English might be confused as they go through the prompts,” Metcalfe said.

Joseph Vanderhulst, an attorney with the Public Interest Legal Foundation, said the fact that Staab’s wife received a voting notification illustrates inherent flaws in voter registration integrity that are not unique to Pennsylvania.

“It kind of just reinforces the issue, which is no filter on the front end and a lack of effort on the back end,” he said. “It’s a failure of the checkbox. The only filter we have is that checkbox … This is, to us, proof that that box is a total failure.”

Staab said he fears that the incentive for voter fraud has reached a fever pitch with the strident attacks on Republican presidential candidate Donald Trump. He noted that Trump’s critics have characterized his election as a clear and present danger to people’s well-being.

“I feel like if there’s going to be cheating, it’s gong to be this year,” he said. “If you believe these things [about Trump], they’re going to do whatever they can to stop him.”

Staab said he is disgusted that so many public officials seem unconcerned about ineligible voters casting ballots, despite abundant evidence that it has occurred. He pointed to revelations last year that a Democratic state representative in New Mexico, Idalia Lechuga-Tena, had been registered and even voted before she became a naturalized citizen.

“Instead of going to jail, she’s a state representative getting paid with taxpayer money,” he said.