The notion that Nazism was a “right-wing” ideology has been perpetuated by recent generations and is profoundly incorrect. The perverse rewriting of history obfuscates the true causes and consequences of the Nazis. It also dishonors the millions lost to the Holocaust. Worse, this kind of absolute ignorance of history is a sure path to repeating it.

In fact, most Americans don’t really understand who the Nazis were.

The Nazis were the National Socialist German Workers’ Party. They were demonstrably self-proclaimed socialists. In the words of Hitler himself from a speech in 1922:

“Whoever is prepared to make the national cause his own to such an extent that he knows no higher ideal than the welfare of the nation; whoever has understood our great national anthem, ‘Deutschland ueber Alles,’ to mean that nothing in the wide world surpasses in his eyes this Germany, people and land — that man is a Socialist.”

Hitler’s “…no higher ideal than the welfare of the nation…” was the justification and method used to deprive citizens of their liberty and property and may go by another name: fascism. Fascism may exist under extreme “right-wing” or extreme “left-wing” regimes and simply means that the individual sacrifices everything to the centralized state.

The Nazi version of socialism was different from the usual pattern, which has led some to mistakenly assert that the Nazis were simply an authoritarian “right-wing” capitalist system. Ludwig Heinrich Edler von Mises, the Jewish economist was an eyewitness of the Nazi economic system through the 1930s. In his 1951 essay “Planned Chaos” he explains the Hitler’s version of socialism as a difference without a distinction:

“[In]the German or “Zwangswirtschaft” system [literally “compulsive economy”] The government tells the seeming entrepreneurs what and how to produce, at what prices and from whom to buy, at what prices and to whom to sell. The government decrees at what wages labor should work and to whom and under what terms the capitalists should entrust their funds. Market exchange is but a sham. As all prices wages and interest rates are fixed by the authority; they are prices wages and interest rates in appearance only…… This is socialism with the outward appearance of capitalism.”

To be clear, Nazism and Bolshevism were simply competing versions of socialism — nothing more. Both failed for the same reasons. Socialists start with “the good of the many” as the collectivist, altruistic justification for their cause but must deprive citizens of their liberty and property by degrees because of successive inefficiencies and eventual failures imposed on market the system.

Christopher Westley, professor of Economics at Jackson State University, in his forward to the 2009 reprint of “Planned Chaos” said:

“[Market] interventions….taken to its logical extreme, result in the complete socialization of society, the necessity of a police state, and the repeal of the rule of law.”

And this is exactly what Hitler did with his “Enabling Acts of 1933,” giving Hitler unlimited, dictatorial power.

Friedrich Hayek, the Austrian economist and Nobel Laureate, dedicated a chapter in his famous 1943 book “The Road to Serfdom,” to “The Socialist Roots of Nazism,” in which he details the inevitability of the process of socialist control leading to totalitarianism.

If you still don’t believe that the Nazis were leftists, just read the 1920 Nazi manifesto, which is a list of demands called the “25 Points” which summarized their positions.

“10. … No individual shall do any work that offends against the interest of the community to the benefit of all.” (All work must benefit the state. But who decides what is beneficial to the state?)

“11. That all unearned income, and all income that does not arise from work, be abolished.” (Investment and interest.)

“13. We demand the nationalization of all trusts.” (Venezuela nationalized vast parts of its economy.)

“16. We demand… the immediate communalization of large stores…” (See any socialist regime of the last century with empty store shelves and long lines of hopeless consumers)

“17. We demand … the enactment of a law to expropriate the owners without compensation, of any land needed for the common purpose.” (The destruction of right of personal property.)

“20… the State must assume the responsibility of organizing thoroughly the entire cultural system of the people.” (Music, art, literature controlled by the state.)

“23. We demand that there be a legal campaign against those who propagate deliberate political lies and disseminate them through the press” (No freedom of speech or press. Who decides what’s true?)

“25. In order to carry out this program we demand: the creation of a strong central authority in the State, the unconditional authority by the political central parliament of the whole” (Everything for and by the state)

And finally, the heading of point 25, “COMMON GOOD BEFORE INDIVIDUAL GOOD;” the very definition of socialist-collectivist thought and the exact opposite of a liberal democracy which exists in part to protect the individual against excesses of the state.

The historical fact is that socialism during the last 100 years has resulted in fascist control of populations far more often and in vastly greater magnitude than right-wing fascism, and has killed millions. One can easily name them, starting with Hitler’s Nazis and including the Soviet Union as well as China,  Cambodia,  North Korea, Cuba and countless banana republics (any nation with a  name including “The Peoples’ Republic Of…”).

And just to have reminded you .. 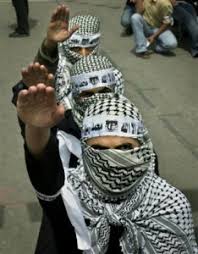