Sunnis consider Shi’ites to be unbelievers, and have attacked them frequently throughout Islam’s 1400-year history. But there is no reason to be concerned about this: Saudi authorities are claiming that the cab driver is “mentally ill.” They likely picked up that idea from Western authorities, who have been routinely claiming that jihadis are mentally ill for years now.

“Taxi driver hauls boy, six, from cab then ‘beheads’ him with shard of glass as his screaming mother fought to save him in Saudi Arabia,” by Dianne Apen-Sadler, Mailonline, February 9, 2019 (thanks to Mick):

A six-year-old boy was reportedly beheaded with a shard of glass as his mother desperately tried to save him in Saudi Arabia.

Zakaria Al-Jaber was in a taxi with his mother on their way to the shrine of Prophet Muhammad in Medina when the driver stopped the car and forced the boy out.

He dragged him to an area near a coffee shop in the Al-Tilal neighborhood, before smashing a glass bottle, reports TMV.

The taxi driver slit his throat with a shard of glass before stabbing him repeatedly as both his mother and a nearby police officer attempted to stop the brutal attack.

It is not known why the driver attacked the boy, but Saudi officials have reportedly claimed he was suffering from mental health issues.

Shia Rights Watch have claimed the boy was killed on Thursday in an act of sectarian violence.

The group said that an unknown man had asked the mother if she was Shia moments before the attack happened….

Shia Rights Watch, whose headquarters are in Washington D.C., said the beheading must be addressed ASAP….

Muslim who stabbed man, screamed “I’m going to kill you, Allah Allah” pleads not guilty on grounds of mental illness 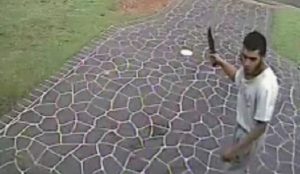 Of course Ihsas Khan is no jihadi. Of course he is mentally ill, as is so often the case that jihad ought to make the next edition of the DSM, the repository of psychological diagnoses. What else could possibly be going on here?

Pay no attention to the fact that the Islamic State issued this call in September 2014:

So O muwahhid, do not let this battle pass you by wherever you may be. You must strike the soldiers, patrons, and troops of the tawaghit. Strike their police, security, and intelligence members, as well as their treacherous agents. Destroy their beds. Embitter their lives for them and busy them with themselves. If you can kill a disbelieving American or European — especially the spiteful and filthy French — or an Australian, or a Canadian, or any other disbeliever from the disbelievers waging war, including the citizens of the countries that entered into a coalition against the Islamic State, then rely upon Allah, and kill him in any manner or way however it may be….If you are not able to find an IED or a bullet, then single out the disbelieving American, Frenchman, or any of their allies. Smash his head with a rock, or slaughter him with a knife, or run him over with your car, or throw him down from a high place, or choke him, or poison him….

“‘I’m going to kill you… Allah Allah’: ‘Ramblings of ISIS supporter before he stabbed a man in the head’ outside a barber shop in Sydney’s west,” by Lauren Ferri and Mark Brook, Daily Mail Australia, January 30, 2019:

An alleged Islamic State supporter who stabbed a man in his Sydney neighbourhood said he was going to kill him as he aimed repeated blows at his head, a jury has been told.

Ihsas Khan, 25, is on trial in the NSW Supreme Court after pleading not guilty to committing a terrorist act and wounding with intent to murder over the attack at Minto, in Sydney’s southwest, in 2016.

Khan is not disputing he stabbed Wayne Greenhalgh but is fighting the charges on the grounds of mental illness.

Mr Greenhalgh gave evidence on Wednesday that Khan said ‘I’m going to f***ing kill you … Allah Allah’ during the incident which occurred as he was walking near Khan’s home.

Mr Greenhalgh was on his way home when Khan, then 22, allegedly came out of his house and chased the victim with a hunting knife, stabbing him in the doorway of a hair salon.

Crown prosecutor Caroline Davenport SC said during her opening address the alleged victim was walking near his house when Khan attacked him with a knife.

When police arrived the former alleged self-radicalised Muslim was heard to say ‘Allahu Akbar’ and ‘I want to die today’, the court heard….

But when the 24-year-old fronted the court on Tuesday, the jury heard he has pleaded not guilty to both charges on the grounds of mental illness….