“It is the mark of an educated man to look for precision in each class of things just so far as the nature of the subject admits …”
— Aristotle in The Nicomachean Ethics.

This is post #430 on the FM website about climate change, a long series giving different perspectives on the threat and the public policy debate about ways to respond. This presentation is by an eminent professor with long experience in both climate science and climate models. It gives one expert’s answers to key questions in the debate about the best public policy response to climate change, and pointing to the key questions that must be answered to make sound policy. Amidst all the noise, this deserves your attention.

“Saving the world from climate threats vs.
dispelling climate myths and fears“

A presentation at an invited seminar by Dr. Demetris Koutsoyiannis.
Given at WasserCluster Lunz on 20 April 2017.

He is a Professor of Hydrology & Hydrosystems in the School of Civil Engineering
at the National Technical University of Athens (NTUA).
Posted with his generous permission. 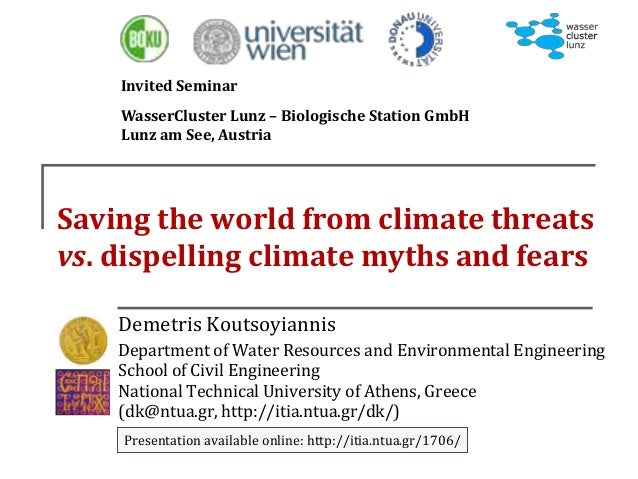 About the seminar’s host: WasserCluster Lunz

WasserCluster Lunz is a nonprofit research center in Austria. It is jointly run by the University of Vienna, the Danube University Krems, and the University of Natural Resources and Life Sciences Vienna (BOKU Vienna). It is financially supported by the Provincial Government of Lower Austria and the Municipality of Vienna. See their website.

About the author: Demetris Koutsoyiannis

See his page at the NTUA website, with his C.V., publications, and his opinions about key questions in his field.

Some of his work about climate change.

See his participation in the 2014 Climate Dialogue debate about How persistent is the climate and what is its implication for the significance of trends?

Among his papers is one of special note: “On the credibility of climate predictions” by Demetris Koutsoyiannis et al. in Hydrological Sciences Journal, August 2008 — Abstract…

Geographically distributed predictions of future climate, obtained through climate models, are widely used in hydrology and many other disciplines, typically without assessing their reliability. Here we compare the output of various models to temperature and precipitation observations from eight stations with long (over 100 years) records from around the globe. The results show that models perform poorly, even at a climatic (30-year) scale. Thus local model projections cannot be credible, whereas a common argument that models can perform better at larger spatial scales is unsupported.

For a less-technical discussion of this article and its significance, see “Koutsoyiannis et al 2008: On the credibility of climate predictions“ by Steve McIntyre at Climate Audit — “Par Frank observes: ‘In essence, they found that climate models have no predictive value.’” Also, I recommend reading this comment by Koutsoyiannis about the difficulty of getting non-consensus papers published in climate science.