Raging wildfires sweeping through the Greek resort region of Rafina in eastern Atticca have killed more than 70 people, officials said, with the death toll likely to rise. 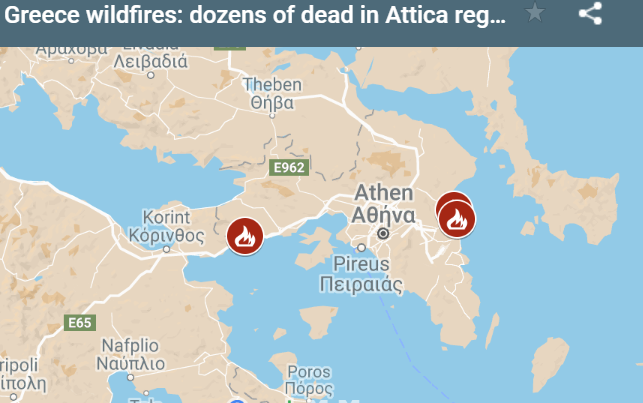 Flames fanned by strong winds have devastated the village of Mati near Athens and there are fears that the number of dead will rise as it is not known yet how many people remain missing.

Fire fighters are still working round the clock to try to bring the blaze under control while rescuers search for the lost.

Israel offered Greece aid in combating the fires and has teams ready on stand-by. ???? #GreeceFires pic.twitter.com/hs1p1XU8z5

One eyewitness decribed the moment they realised they had to flee.

“We left at the last minute… Suddenly there was heavy smoke and very strong wind, we couldn’t breathe, luckily my wife had brought towels and water and we managed to escape.

“There was panic, people were screaming for help.”

Another, who only just managed to escape with his young baby as the flames engulfed the first floor of his home, said: “Suddenly I started hearing explosions. Glasses were breaking, containers of gas in kitchens and car deposits were exploding. By instinct I said to myself that this is it.”

There was a lot of panic in the streets. When the fires first started, many decided to stay and try to save their properties but then they quickly understood that they had to leave urgently.

“People were running in the streets screaming that they were burning, no one could save them,” one person said.

There rescuers found the bodies of 26 adults and children, who had apparently hugged each other as they died, trapped just metres from the sea.

Greece fires: Twenty-six people found dead hugging each other in a field

Even the toughest broke down in tears when they heard what happened on the Silver Coast, near Mati.

Twenty-six people, adults and children, were found dead, hugging each other in a field.

They left their cars in panic and ran towards the sea. But they were trapped over a cliff.

Euronews reporter Michalis Arampatzoglou at the scene says, “The light of day revealed the size of the disaster. The flames reached the sea. 26 people were tragically killed on the field you see behind me. This coast is rocky and they didn’t manage to find the path that leads to the sea”.

An eyewitness and survivor says, “When we realized there was no way out, we left our car in the middle of the road. I took my (3-year-old) child in my arms and started to run through a path towards the sea. We ended up on a path behind that house, went down to the beach and jumped into the sea. It was a matter of seconds, to make it in the sea on time. I am sure that there were people behind me, and I knew that they wouldn’t make it. It was mathematically certain. And they were indeed found. I don’t know exactly how they got trapped in the field, probably before they got to the path. Only now do I realize that this is where the 26 people were found”.