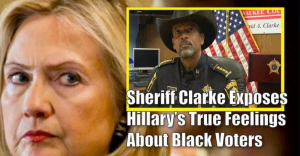 “Hillary Clinton has a well-earned reputation for being an elitist, rude, cruel, pandering shrew.

From bodyguards to Secret Service to aides, everyone tells the same story about Hillary.

All of these people can’t be wrong.

All of these people can’t be part of the infamous “right-wing conspiracy” that Clinton usually blames all of her scandals on.

This quote definitely “fits” with the picture painted by so many others who have had relationships and run-in’s with Hillary Clinton.”