Check Out the Democrats Who Supported Gorsuch in 2006

President Trump’s nominee Judge Neil Gorsuch is set to succeed Justice Scalia on the Supreme Court and liberals are losing it.

But jump back to 2006 and there were a slew of democrats who approved of Gorsuch when George W. Bush submitted his name for the Senate’s consideration.

Here’s a list of Democrats who supported Gorsuch’s confirmation

Sen. Dianne Feinstein, ranking member of the Senate Committee on the Judiciary

In a stunning about face, at least one person on this list, Sen. Wyden of Oregon, announced he would oppose the nomination, and asserted Gorsuch “harkens back to the days when politicians restricted a people’s rights on a whim.” 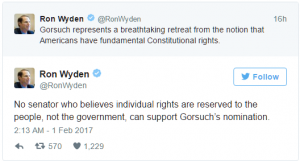 A handful of Democratic senators indicated they would attempt to stage a filibuster.

“This is a stolen seat. This is the first time a Senate majority has stolen a seat,” Merkley said. “We will use every lever in our power to stop this.”

“A very large number of my colleagues will be opposed,” he added.

Gorsuch was not considered a controversial nominee when elevated to the 3rd Circuit. He was confirmed to the 10th Circuit on a voice vote with the support of many of the same Democrats who now pledge to stop him.

FLASHBACK VIDEO : Obama in 2016 “You Can’t Block A Supreme Court Justice Because You Didn’t Win”

Barack Obama announced at a Clinton/Kaine rally in 2016, that “you can’t block a supreme court justice because you didn’t win.”

Any chance we can get Obama to make that announcement again for the idiots freaking out about Gorsuch?