Actual growth in South East Asian fossil fuel consumption over the last twenty years, and projections of a near doubling of demand by 2040, indicate that developing nations won’t undermine their own development objectives in favour of decarbonisation.

On the 22nd of September at the 34th Association of South East Asian Nations (ASEAN) Ministers of Energy Meeting (AMEM) in Myanmar, Dr Fatih Birol of the International Energy Agency (IEA), met energy minsters in the 5th AMEM-IEA Dialogue, a meeting that resulted in the following joint statement:

The ASEAN Ministers and the IEA Executive Director discussed current energy trends and their impact on the ASEAN region. In particular, the Ministers acknowledged the changing dynamics of the oil and gas markets, including the prolonged low oil price environment, the rebound in global oil and gas production unlocked by upstream technologies in oil and shale gas, and reduction in new investments in upstream exploration as well as volatilities arising from geopolitical factors and long-term market rebalancing. The Ministers looked forward to further analysis by the IEA, which will help ASEAN Member States in developing appropriate energy policies and strategies to respond to the changing energy landscape. ASEAN Ministers also welcomed the IEA’s new “open doors” policy towards deeper and wider-ranging collaboration with emerging economies in Southeast Asia.

While this is diplomatic language, it is hard to believe that Dr Birol will have been pleased with such a cheap-oil-and-gas response to his own presentation, in which he emphasized both “the shift in energy demand growth to Asia” and “the importance of taking advantage of [the] decreasing cost of renewable energy and energy efficiency.”

Far from wanting to restrain their consumption, the ASEAN ministers seem much more concerned with securing fossil fuels at advantageous terms, a pragmatism that should come as no particular surprise, least of all to Dr Birol. Indeed, read in the context of last year’s IEA South East Asia Energy Outlook special report Dr Birol’s speech sounds more like a plea of desperation than a realistic hope. It is a plea, however, that the energy ministers politely brushed aside. In their shoes Dr Birol would probably have done the same. He certainly knows the facts.

Southeast Asia’s rapidly rising energy demand is daunting in itself, but the outlook is still more remarkable. In the central, but arguably rather optimistic New Policies Scenario, the IEA projects demand to increase by 80% up to 2040, reaching 1,070 mtoe per year. The bulk of this increase is provided by fossil fuels, which increase their share from 74% (437 mtoe) at present to 78% (838 mtoe) in 2040.

The IEA’s table is so striking that I reproduce it here in its entirety: 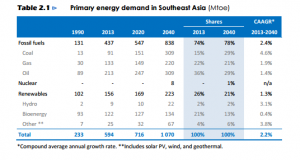 This is the fundamental truth behind the Paris agreement, echoing through the ASEAN minister’s response to the IEA: aspirations are one thing, demands for affordable energy in the real world are another.