This is straight from the Clinton’s playbook, smear and lies. How much money did the Clinton’s pay to get her to lie? More importantly, is this the way America should be run?

The story ..
When Donald J. Trump bought the Miss Universe company I was working for JohnKluge, whom Trump admired.
Mr. Trump asked me to lead the team that oversaw theladies and their charitable activities.
Venezuela’s Alicia Machado (Miss Universe 1996)recently made several claims that ﬂy in the face of reality.
They are shocking lies, in my view, totally self-serving. She is now endorsing and being endorsed by the Clinton team for her untruths.
As you know, at the debate Mrs. Clinton repeated the lies. I was there and I was the one who carried Alicia’s messages to Mr.Trump and his to her.
In fact, I was always at each and every encounter Mr. Trump had with her.
It was a totally diﬀerent reality than what she is now presenting.She had asked for the help that Mr. Trump gave and wept openly saying,
“Nobody has ever cared for me the way he has!” In interviews at the times she said similar things praising Mr. Trump.
But now she keeps granting interviews saying wild untruths; I challenger her version. I saved the news clips of interviews
I had arranged for her to help set the story straight. The clips below are from her interviews and they debunk her myths.
She had eating disorders long before she met Mr. Trump. She also originated the name “Miss Piggy”.
Mr. Trump never called her that and I was with them at every encounter. Now, 20 years later, she blames the man who she once said helped her the most.
Her reasons aren’t too mysterious – Venezuela is in urgent economic decline and she needs to make a home in America.
I make no secret that I have worked for two decades for Mr. Trump’s companies and undertakings. I am not a surrogate for Trump nor am I paid to say what I’m saying. I have not discussed this with his campaign.I strongly believe Mr. Trump is a great man who will be a strong, decisive president.Beyond that, this lady is making up a history that does not exist and I am an eye and ear witness to that. Let me know if there is an interest in following up on your great story today. 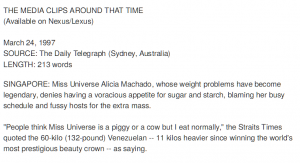 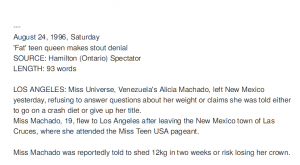 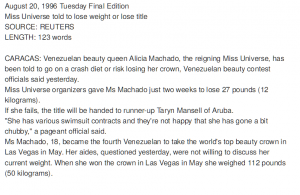 Source: Scribd.
It’s disgraceful that a nominee for a major political party seeking the highest office in America are this corrupt, total disgrace!
.
.
Solution ..