Dow industrials are up more than 6% postelection

“Don’t fight the trend” is an oft-used expression on Wall Street. It may be truer now than ever. Casting a dubious eye on what has amounted to a spectacular rise for equity markets since Donald Trump became president-elect in November is proving a costly enterprise.

Whether the advance for equities can sustain itself over the next month and into 2017 is anyone’s guess, but for now investors who have been reluctant to embrace the unabashed exuberance that has gripped stock investors over the past month are losing money—fast.

Underscoring that point, four closely watched gauges of the health of the market ripped higher Wednesday to mark fresh records, even as health-care stocksIBB, -0.07%  were stumbling badly after Trump suggested that he may crack down on the pricing power some drugmakers wield.

Here’s a look at how some of the action played out:

The Dow Jones Transportation Average DJT, +2.53%  soared to its first intraday record of 9,383.65 to finish at a record of 9,371.61, marking its first all-time high in more than two years (as the following chart shows): 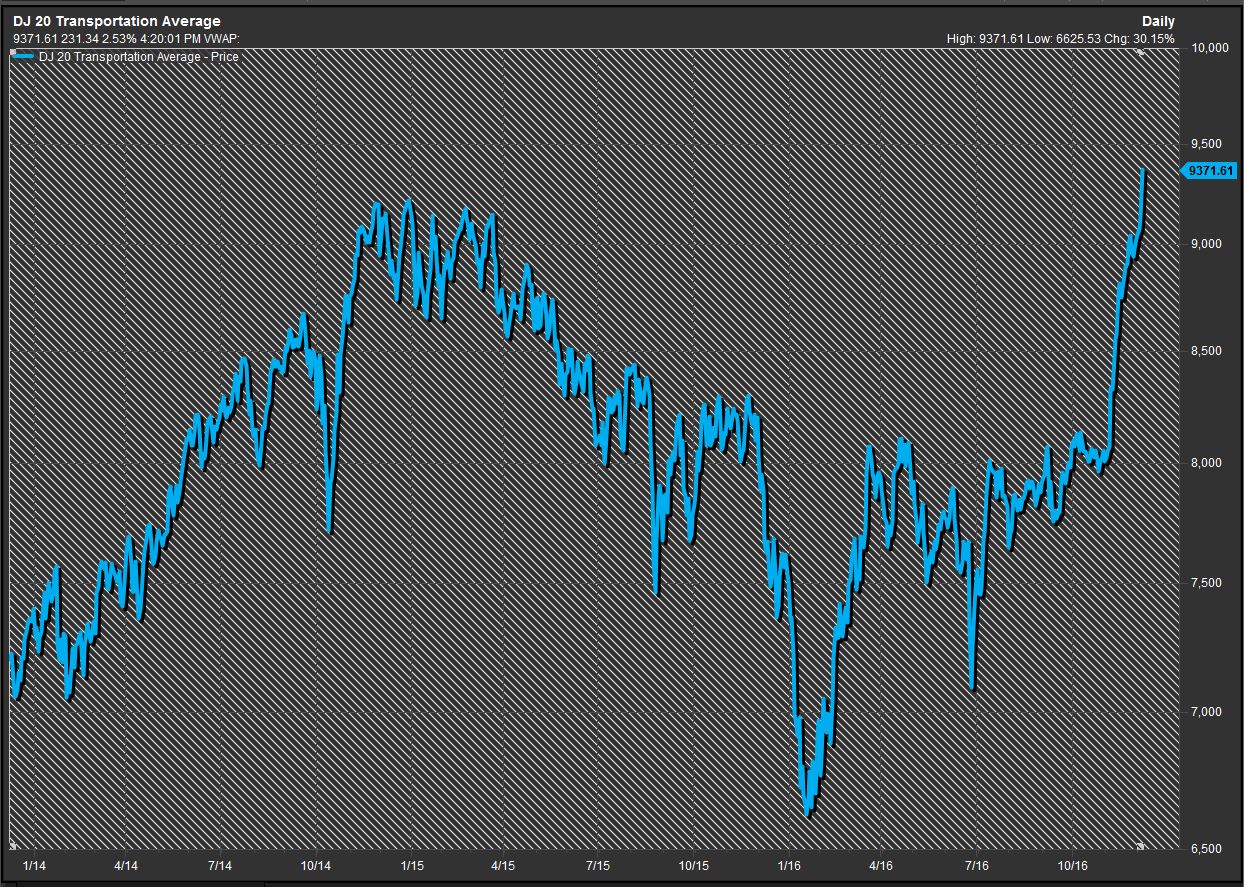 From a technical standpoint, higher highs for areas of the market like transports, which are viewed as a measure of the health of the economy, are considered a bullish sign, according to those investors who adhere to Dow Theory. 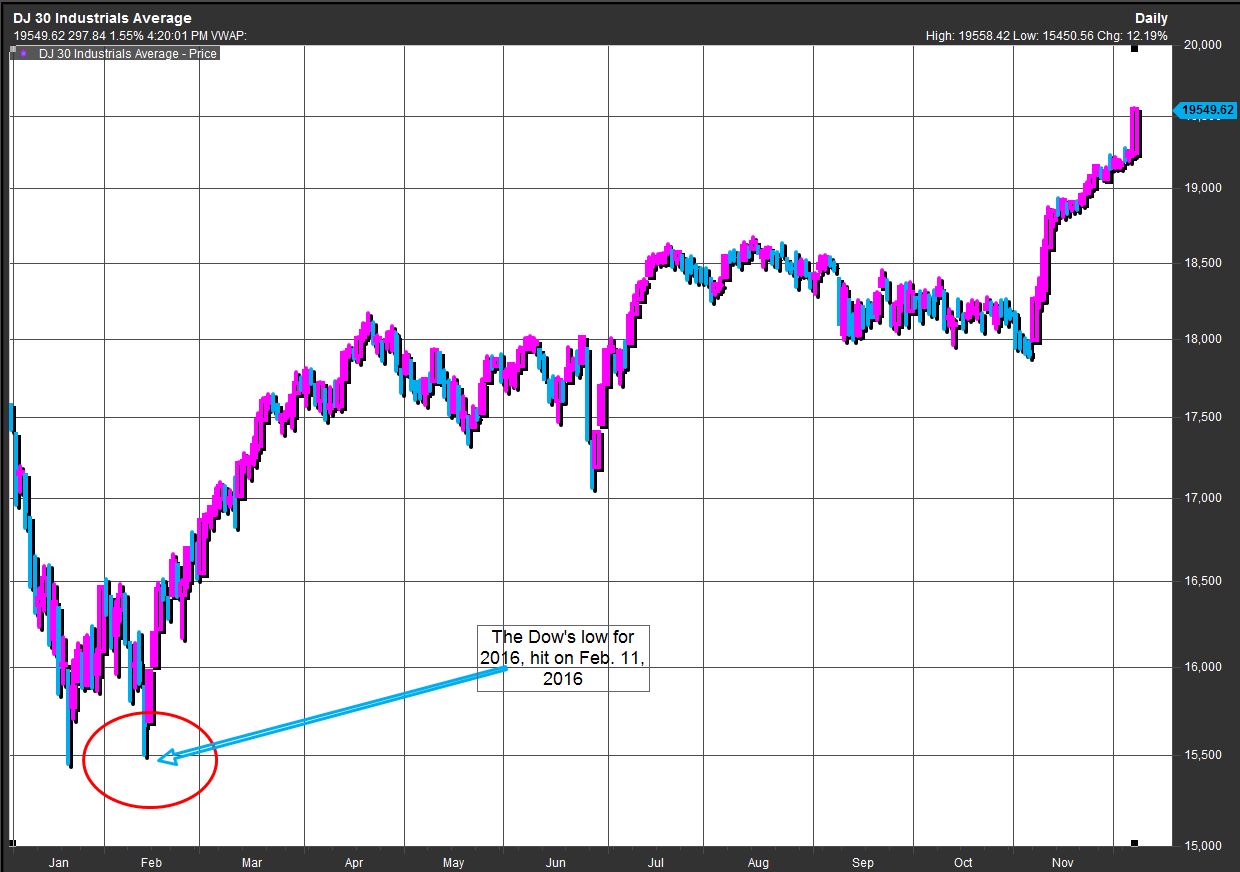 The S&P 500 index SPX, +1.32%  joined the Dow in record territory on Wednesday storming to a record high of 2,241.63 and wrapping the day at an all-time closing high of 2,241.35, after opening in negative territory. The broad-market index is up about 22% since its February lows. 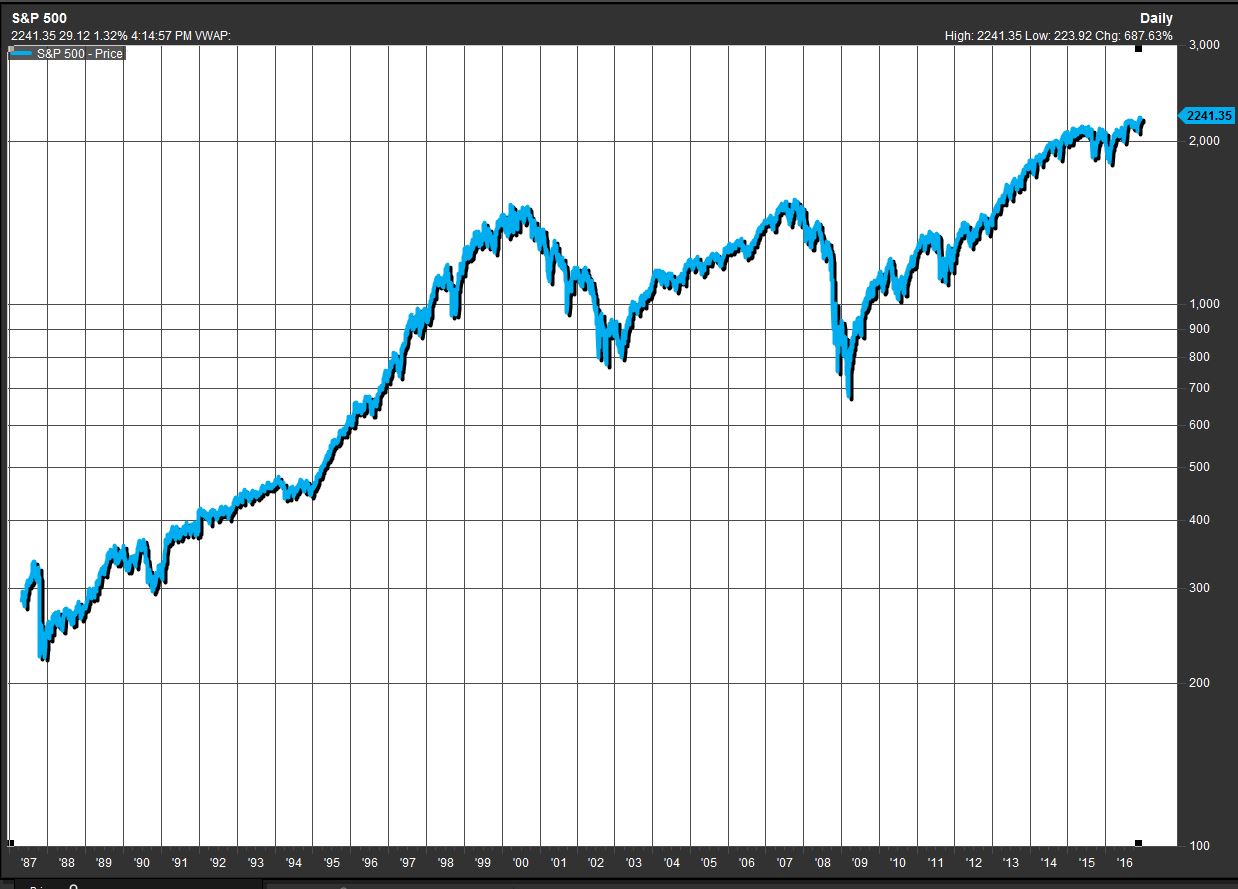 “We do think we kind of grind higher from here,” said Andrew Adams, market strategist at Raymond James Financial told MarketWatch. He said that even if the market does see a pullback there are many bets in place that the market marches higher.

To be sure, this isn’t a recommendation to jump wholeheartedly, or blindly, in the market. Meetings of the European Central Bank on Thursday and of the Federal Reserve Dec. 13-14 could take some of the froth out of stocks. But the main driver right now appears to be Trump and policies that Wall Streets is widely reading as pro-business.

Check out: Gross warns investors of the ‘negatives’ of Trump policies

Some strategists are still waiting for tech to join the party. The Nasdaq Composite Index COMP, +1.14% has been languishing after setting its record close of 5,398.92 Nov. 25.

Still, the tech-heavy gauge ended at 5,393.76 on Wednesday, just about 5 points shy of its own record close.

“Technology as a sector has NOT yet shown evidence of turning higher properly in a way that would suggest good relative strength into year-end,” wrote Mark Newton, technical analyst at Newton Advisors, in a Wednesday note. Ref.: http://www.marketwatch.com/story/stock-markets-record-run-signals-its-a-fools-errand-to-fight-trump-rally-2016-12-07