Colin Kaepernick may have started the kneeling in protest of America’s national anthem, but Stephen Martin, owner of Prime Time Sports in Colorado Springs, Colorado, has started a patriotic rising unlike anything that’s ever been done before.

Martin first took a stand when NFL player Brandon Marshall refused to stand for the anthem.   Immediately, Martin cancelled Marshall’s scheduled autograph signing event in his store.  But he wasn’t done.   He replaced the star’s event with something entirely different in his store, and in one week, it has grown to epic proportions that he can hardly even keep up with now.

He put out a post on Facebook, respectfully disagreeing with the disrespect of the nation’s flag and anthem, then proceeded to explain just what the flag means to him, and the sacrifice of all the men and women who have fought for it.     Martin invited people to send photos of their loved ones who are veterans, in active service, or who have been injured or given their lives in the line of duty. 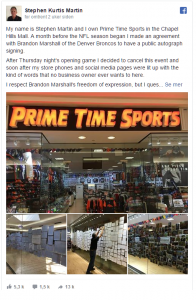 The photos started pouring in from all across the country, and as fast as they were emailed, Martin printed them off and taped them to his store front window.  Americans are sharing their photos and stories on his Facebook page, as well as sending to him through email, and each day he has posted photos of the progress.

“Day #3 “Honor The Flag”. 77 photos went up today. Our flag has been soaked in blood and sweat represented by these pictures, but it is the “words with tears” that come with them, that keep it wet.
Email your photo: honortheflagprimetimesports@gmail.com.”

“Day #4 “Honor The Flag”. 128 photos went up today and I am still moved by the stories with each photo.”

“Day 7 “Honor The Flag” memorial wall. 190 photos just went up. It has been difficult keeping up with personal responses to each photo. At 62 I still need my afternoon naps. Please do not see my lack of correspondence to each photo as anything disrespectful.”

Thursday morning, he said, “Woke up to 190 emails this morning. They are coming in faster than I can read, get downloaded and over to Walgreens to get printed.”

America has truly answered Martin’s call to “hear the voice of the American flag.”