God forbid dishonest activists should use science! Satellites shows the temperature doesn’t increase, it hasn’t gotten warmer in 20 years. The sun controls the temperature in several ways, direct sunlight (energy input), magnetosphere and solar wind etc. Point is, it’s not getting warmer. It is the temperature and pressure that regulate the CO2 level in the atmosphere according to Henry’s Law – story below is only an attempt to explain away that scientific fact to keep the fairy tale about Man Made Global Warming, i.e. “Climate Change” alive in order to keep the tax payers money to continue flowing to their multi billion, global fraud

From the DOE/LAWRENCE BERKELEY NATIONAL LABORATORY and the Department of Hungry Biomass comes this encouraging news that throws cold water on climate alarmism.

New findings suggest the rate at which CO2 is accumulating in the atmosphere has plateaued in recent years because Earth’s vegetation is grabbing more carbon from the air than in previous decades.

That’s the conclusion of a new multi-institutional study led by a scientist from the Department of Energy’s Lawrence Berkeley National Laboratory (Berkeley Lab). It’s based on extensive ground and atmospheric observations of CO2, satellite measurements of vegetation, and computer modeling. The research is published online Nov. 8 in the journal Nature Communications.

To be clear, human activity continues to emit increasing amounts of carbon, and the atmospheric concentration of CO2, now at 400 parts per million (ppm), continues to rise. But the scientists found that between 2002 and 2014, the rate at which CO2 increased in the atmosphere held steady at about 1.9 ppm/year. In addition, the proportion of the CO2 emitted annually by human activity that remains in the atmosphere declined by about 20 percent. This slowdown can’t keep pace with emissions, so the overall amount of human-caused CO2 in the atmosphere increased, just not as quickly. And for that, new research suggests, we can thank plants. 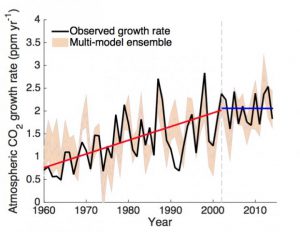 “This highlights the need to identify and protect ecosystems where the carbon sink is growing rapidly,” says Trevor Keenan, a research scientist in Berkeley Lab’s Climate & Ecosystem Sciences Division and the corresponding author of the paper.

They also identified another player. Plant respiration, a process in which plants use oxygen and produce CO2, did not increase as quickly as photosynthesis in recent years. This is because plant respiration is sensitive to temperature, and it was affected by the recent slowdown in global warming that was observed most significantly over vegetated land. So, between 2002 and 2014, plants took in more CO2 through photosynthesis, but did not “exhale” more CO2 into the atmosphere through respiration.

“These changes decreased the amount of anthropogenic CO2 that stays in the atmosphere, and thus slowed the accumulation of atmospheric CO2,” says Keenan.

Their findings provide a possible answer to a climatic mystery. The growth rate of atmospheric CO2 climbed steadily during the latter half of the 20th century, from 0.75 ppm/year in 1959 to 1.86 ppm/year in 2002. But Keenan and colleagues discovered an inflection point last year when they analyzed the latest data from the Global Carbon Project, which quantifies carbon emissions and their sources annually. Since 2002, the growth rate has remained flat.

This pause is especially surprising because it has occurred as human activity pumps more and more carbon into the atmosphere. All that CO2 must be going somewhere, so the scientists suspected something about the carbon cycle has recently changed in a big way.

“We believed one of the planet’s main carbon sinks had unexpectedly strengthened. The question was: which one?” says Keenan.

The scientists ruled out oceans as a dominant cause because most computer models agree the amount of carbon taken in by oceans has increased steadily in recent years. That left terrestrial ecosystems, which undergo a large year-to-year variability in carbon uptake, and the two biggest influences on this variability are photosynthesis and plant respiration.

To study these influences, the scientists used ten “global dynamic vegetation models” that predict how the terrestrial carbon cycle changes over time.

They also used a model that incorporates satellite measurements of vegetation cover and plant activity to predict global photosynthesis and respiration rates. They validated the model by comparing its results with data from AmeriFlux and FLUXNET, which are networks of eddy-covariance research towers that measure ecosystem carbon, water, and energy fluxes in North and South America. Berkeley Lab manages AmeriFlux for the Department of Energy.

Model projections were generated using different scenarios of atmospheric CO2 level, temperature, soil moisture, and other processes. This enabled the researchers to evaluate the impacts of these processes on the planet’s terrestrial carbon cycle.

The scientists conclude this increase in carbon uptake put the brakes on the growth rate of atmospheric CO2 between 2002 and 2014.

[and here is the obligatory alarm statement -AW]

“Unfortunately, this increase is nowhere near enough to stop climate change,” says Keenan, adding that their results answer questions and pose new ones. “We’ve shown the increase in terrestrial carbon uptake is happening, and with a plausible explanation why. But we don’t know exactly where the carbon sink is increasing the most, how long this increase will last, or what it means for the future of Earth’s climate.”

The research is partly funded by the Laboratory Directed Research and Development Program of Berkeley Lab and the Department of Energy’s Office of Science.