Image: Climate Armageddon Will Soon Be Here–But Who Will Notice?

The non existing (Man Made) Global Warming, now “Climate Change” (due to lack of … warming) has again been renamed, this time it is “Climate Crisis.” Temperature has been falling for a century, but still the left is insisting there’s a global, and man (CO2) made warming crisis.

We all know it’s just an excuse for “Green” Crony Capitalism!

Video: Tony Heller
Washington DC is having their coldest Memorial Day weekend on record – by a wide margin. Joe Biden has healed the climate.

Video: @lonestarmango (Twitter)
Outstanding rebuttal to Greta and the rest of the snowflake generation by Aussie newscaster…

NY Times: Air travel is a big climate problem with no good solution (except to stop flying)

Ever had a discussion with a “green” leftist? Some of them do not accept temperature measurements if it is not PAL-reviewed, sorry: “Peer-reviewed” – yeah, I know, it’s that stupid!

“We are going to kill ourselves because of stupidity” 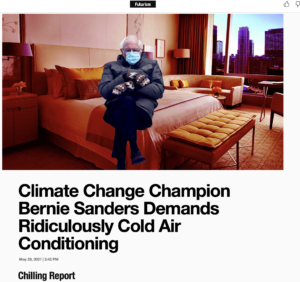 Current temperature and wind pattern in the NH. (Real time)