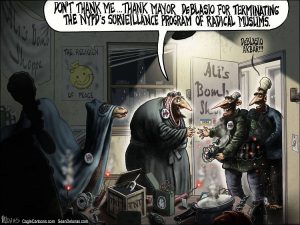 Robert Gehl reports that while New York Leaders debate whether or not the bombing in New York was a “terrorist attack” or just an “intentional act,” mode details are emerging that connect the Chelsea neighborhood bombing with an explosion at the start of a Marine Charity run in New Jersey.
Law enforcement have confirmed to Fox News that both bombs were from the “same person.” 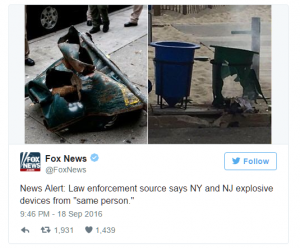 One of the bombs exploded in a garbage can along a route where thousands of runners were preparing for a 5K Marine Corps charity fun run early Saturday morning. Nobody was injured but the race was delayed. After searching the route, police found two other devices that did not detonate.

Later that day, a bomb placed inside a Dumpster exploded in the Chelsea neighborhood of Manhattan, injuring 29 people. A second explosive device was found a few blocks away.

The bombs appear to be homemade pressure-cooler-style devices, similar to those used in the 2013 Boston Marathon Bombing. 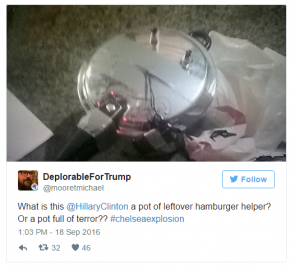 New York Governor Andrew Cuomo said Sunday that “a bomb exploding in New York is obviously an act of terrorism” but Mayor Bill de Blasio refused to call it terrorism, saying only that it was an “intentional act.”

Meanwhile, a manifesto has been discovered on the internet that claims responsibility for both attacks.

Posting on Tumblr, the “manifesto” is titled “I’m the NY Bomber” and claims to have been written the person who planted the bombs.
The page has since been taken down, but a cached version is here.

It appears the bomber is a radical Gay Rights activist, willing to kill to get their point across.

The page – which has a rainbow flag at the top – said the bombings are a protests against the oppression of the LGBT community.

“You probably have all seen the news by now, the explosives detonated in New York City, that was me,” the first post said.

“I did it because I cannot stand society. I cannot live in a world where homosexuals like myself as well as the rest of the LGBTQ+ community are looked down upon by society.”

In a second post, the author wrote, “I don’t know exactly how I feel about taking human lives.”

“I suppose I’m just going to have to move forward knowing that what I am doing had a purpose and will in fact make a difference,” it said.