Given current technologies, it makes no sense to destroy $100 Trillion in wealth this century for an unmeasurable reduction in warming. 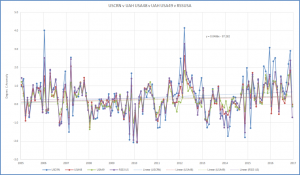 Everything humans do requires energy. Everything.

The more efficiently we can do those things, the greater humanity prospers. Affordable energy is part of that efficiency.

So, can it really be called “anti-science” that the moment Trump was inaugurated, the White House deleted all references to climate change on their web pages?

No, I don’t consider it anti-science. Because science has nothing to say about what it would cost in terms of human suffering to avert climate change. What to do about climate change is a matter of engineering and economics… not science.

As a lukewarmist I believe (but can’t prove) that humans are probably responsible for some of the recent warming (which has been mostly benign).

I further believe (but can’t prove) that humans will cause somewhat more warming in the future…. I’d put my best guess at maybe another 1 deg. C this century, based upon our (and others) research into climate sensitivity.

But until some new energy technology comes along (probably from the private sector) we are stuck with fossil fuels for the foreseeable future. The oil industry’s use of fracking has already reduced carbon dioxide emissions — through a switch from coal to natural gas — by more than any government command-and-control efforts.

As Bjorn Lomborg has recently estimated, efforts to “fight” global warming under the U.N.’s Paris Agreement could cost the world $100 Trillion in lost wealth by the end of this century.

That, I guarantee you, will lead to (preventable) deaths, due to poverty and all problems stemming from poverty.

And for what gain? An unmeasurable decrease in further warming of maybe 0.1 deg. C at best (and that’s assuming climate sensitivity is high and that we are in for several deg. C of future warming — which I don’t). As someone who knows how temperatures trends are measured on the ground (I’ll bet none of the thermometer climate data “experts” passed NWS weather observer certification exams like I did) and by satellite (I’m the co-inventor), I can say that this level of future temperature reduction is unmeasurable by any system we have.

So, while the White House deletion of “climate change” references from their website might be met with accusations that the new administration is anti-science, what I suspect it really means is that President Trump does not want to waste time and destroy prosperity just for those who want to feel good about their efforts to Save The World™.

Because the price for them feeling good might well mean the premature deaths of millions.

And that’s the way I would argue this issue. Poverty kills millions. As far as we know, human carbon dioxide emissions have killed no one. In fact, it has saved millions of lives and increased prosperity. For example, I’ve blogged before on the fact that more CO2 has increased corn crop productivity more than rising temperatures have hurt it, and that climate models have badly botched forecast warming post-1960 in the U.S. Corn Belt.

I don’t really care where our energy comes from. As long as those sources benefit humanity.