Give it a few more months and it will be millions of times more potent – and dangerous!!

Desperate (read: deeply dishonest) rent & grant seeking activists and criminals are now saying air conditioning controls the sun much stronger than before (which in fact do control the weather and climate), air condition units contain chemicals, and: “.. the chemicals have warming potentials hundreds to thousands of times higher than that of CO2 ..” There’s no long, smooth transition, either a gas stops convection (wind in all forms), or it doesn’t (did you notice there’s less wind?) No known gases or mixture of gases has that property, gases do not prevent convection, i.e. they are not “greenhouse gases” – in fact, in the real world there’s no such thing as a “Greenhouse Gas” (It might have been if there was no convection, but then again, if there was no convection we would not be here either)!

In the same article they are also confused about the differences between the environment and the climate. It was never the same, it never will be the same. Climate has always been controlled by the sun, Milankovitch cycles, ocean currents etc. while the environment is the garbage and polution the “greens” (communists) are leaving behind everywhere they go and have been.

Video: Tony Heller
Vladimir Lenin was born on April 22, 1870. On his 100th birthday, the date was renamed to “Earth Day”

You can’t have temperature failing to rise when the criminals has decided it will rise!!

From the article: Three Decades of Climate Mitigation: Why Haven’t We Bent the Global Emissions Curve?

.. we read: “Despite three decades of political efforts and a wealth of research on the causes and catastrophic impacts of climate change, global carbon dioxide emissions have continued to rise and are 60% higher today than they were in 1990.”

If CO2 was this magical gas as portrayed by the rent & grant seekers, why is there’s no temperature rise, in fact global temperature average today is lower than that of 1988: 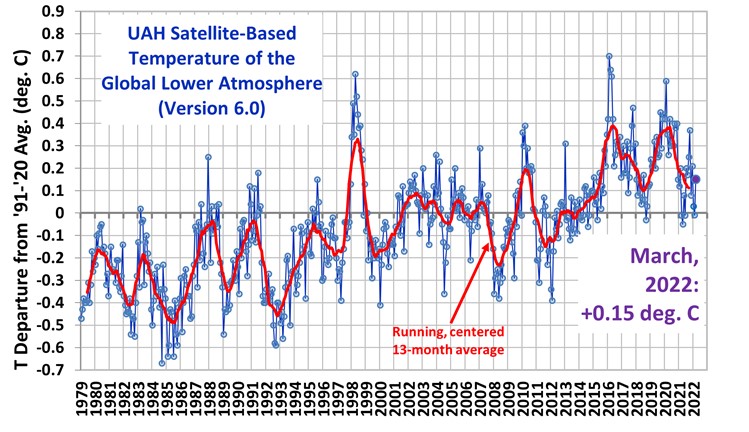 .. because it’s not about temperature, CO2, science or facts, it’s not even about the climate at all, it’s about … A (FAKE) global problem needs a (REAL) global response, the New World Order’s – World Government – run by leftist criminals.

Say goodbye to free speech, food, energy, free movement, free elections, property rights, cash … You’ll own nothing (not even your life) – but you WILL BE HAPPY!!