Image: IPCC report: Climate change is our fault, will affect “our kids and grandkids” (2014) 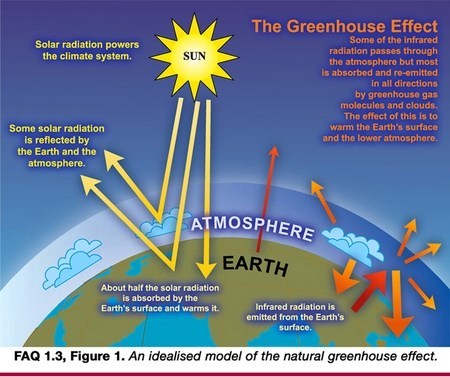 John Elliston AM, FAusIMM(CP), author of several peer-reviewed papers, concludes that the UN’s Intergovernmental Panel on Climate Change (IPCC) relies on a definition of the “Greenhouse Effect” (AR4,page 946) which is “plain wrong.”

Elliston pulls apart the IPCC’s iconic diagram (AR4, page 115) to reveal fundamental errors (shown below). The cartoon-like diagram is simplified to illustrate the flaws in their “Greenhouse Effect” concept.

When a scientific expert of this caliber speaks out, people take note. For exceptional services to his country in chemistry and geology Elliston received the highly-prestigious  Order of Australia (AM). [1]

The definition and the accompanying diagrams below are the centerpiece of global warming science: the UN IPCC Assessment Report (2007) and are a major cause for concern.

“The statement in the definition that downward atmospheric radiation from the cold upper atmosphere “trap(s) heat” in the surface-troposphere system to result in higher temperatures and global warming is untrue.”

He goes on to clarify,

“The idea that back-radiation or radiant heat from the very cold upper atmosphere results in increasing the temperature of the warmer air below contravenes at least two elementary laws of physics (Second Law of Thermodynamics and Stefan-Boltzmann Law).”

As Elliston indisputably points out,

“cold things like the exceedingly cold upper atmosphere cannot radiate heat to result in warming much hotter air near the ground that is the climate we live in.” 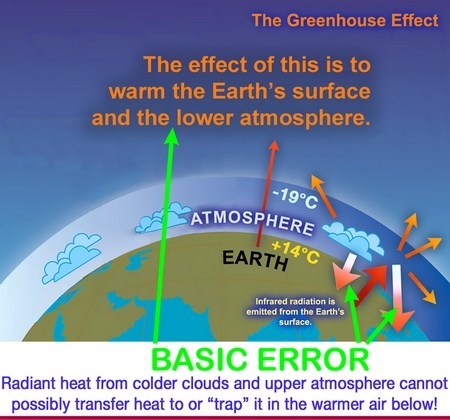 Even friends of the IPCC are now conceding that the very choice of “Greenhouse Effect” to imply that water vapor and trace levels of CO2, methane, etc. cause global warming is unfortunate.
Even 53 of the “best” authorities have a haphazard history of saying our atmosphere is, then it isn’t like a greenhouse.[2]

In reality our open atmosphere cannot act like a glasshouse because there is no physical barrier to confine convective recirculation of air. Within the enclosed space of a glasshouse, air is warmed by surfaces and objects heated by solar radiation through the glass and it must circulate within it.

In the open atmosphere warm air simply rises to higher altitudes and expands until it is as cool as its surroundings.

“Radiant energy reaching the Earth from the Sun is the only source of heat to maintain or vary global climate. Solar radiation varies according to the spectral wavelengths emitted, the number of sunspots, the extent of the sunspot activity on the side of the Sun facing the Earth and the proximity of the Earth to the Sun in the normal course of its elliptical orbit. The maximum intensity of radiation due to distance is at perigee.”

Indeed, as this extensive study shows, sunspot activity in the magnetic gaseous plasma at the surface of the Sun is related to the “tide-like” gravitational influence of Jupiter.

“From 1947 some Australian universities taught that this varies in complex uneven cycles as the other heavy planets are grouped on the same or on the opposite side to Jupiter or dispersed more or less evenly round the Sun.”

Historic records and observations of sunspot activity since 1610 confirm this point. They establish that they are related to the synodic period of Jupiter and that periods of colder climate are associated with low sunspot activity. Each synodic period is the time between planetary conjunctions or 1.092 Earth years between alignments of Earth and Jupiter.

It is the only source of sufficient heat for cyclic climate changes. As in the past, global climate change can only be due to longer or shorter-term variations in solar radiation.

Misuse or Abandonment of the Scientific Method

Elliston is a stickler for adherence to the traditional scientific method and has been dismayed at how government climate science appears to have abandoned the principles of fidelity to empirical evidence.

“IPCC reports are not based on scientific method. Instead, they use computer algorithms to assess selected data in large numbers of papers by ‘climatologists’ that support the conclusions they want policymakers to believe. Natural climate change cycles before 1765 (the industrial revolution) occurred without industrial CO2 in the atmosphere.“

In fact, Elliston found that nowhere in the IPCC is there established any causal link between increasing levels of CO2 in the atmosphere and the global weather records that indicate an increase in average global temperatures.
However, strong fluctuation but no increase in average global temperature due to the continued increase of CO2 levels has been recorded for the last 15 years.
Also, there are now no fewer than 85 peer reviewed papers discrediting the core claim of a CO2-driven radiative greenhouse gas effect (GHE).

Like many independent scientists and citizen researchers Elliston notes the immense internationally financed publicity effort by IPCC that has managed to mislead so many (including Australian Government officials) that an increase of 0.0105% CO2 in the air has been the cause of the observed 0.8°C rise in average global temperature from 1950 to 1998.

Yet, our planet’s average global temperature COOLED by more than half a degree Celsius from February 2016 to February 2018, according to recent NASA data. Thus, wiping out all the so-called ‘man-made global warming’ of the 20th century.

“The IPCC have projected this increase to alarming levels into the future but their measurements are all in the rising period of one of our longer-term natural global warming-cooling cycles. But there have been seven of these since 1000AD, all without industrial CO2. Apparently we are now towards the end of a normal change over period with global average temperatures trending slightly lower.”
“Few people read IPCC reports and they have relied on the complexity of their definition and this diagram to conceal their poor understanding of a basic scientific principle,” concludes the study.

Thus, the IPCC has relied greatly on jargon and computer models instead of good old fashioned analysis based on observations and assessment.

In doing so, climatologists have confused each other with explanations of scientific detail that disregard or misuse Planck’s law, Wein’s displacement law or the Stefan-Boltzman law.