President Trump wasted no time pointing out what an EPIC failure Obama was as a negotiator after he finished up his wildly successful peace summit with North Korea.

President Trump trolled the failed former president, by reminding him that it did not take $150 billion taxpayer dollars to stroke a deal with North Korea.

A not-so-subtle jab at Obama’s disastrous Ira Deal, which Trump (thankfully) backed out of.

In an interview with ABC News’ George Stephanopoulos, President Donald Trump took a swipe at former President Barack Obama, suggesting that he was able to secure a deal with a rogue nuclear nation without dropping pallets full of cash on Tehran tarmacs.

Many of the same media figures who’ve scoffed at Trump’s attempt to ink a nuclear deal with North Korea are the same media figures who trumpeted President Obama’s nuclear deal with the Mullahs of Iran, and Trump isn’t willing to let the media forget about it. Both deals had their risks, clearly, and Trump seems to want fair treatment in that regard.

Stephanopoulos asks Trump whether, now that he’s had experience negotiating for disarmament with a nuclear power, if he still believes that Obama’s deal with Iran was misguided.

G: You’ve set the bar for nuclear agreements by criticizing the Iran nuclear deal, said it’s the worst deal ever made.

G: Does that mean that any deal with North Korea has to be tougher than the Iran deal?

T: I don’t think a deal could be softer. First of all, we’re not paying $150 billion, OK, we’re paying nothing from that standpoint other than, you will see what happens.

There’s also another important distinction between the Iran deal and the North Korea deal: there aren’t any long-term benchmarks to be met in the North Korean deal. Both countries decided what they’d be willing to part with, and neither country has yet taken steps to ensure those concessions end up happening (though North Korea has demilitarized to some degree, in the sense that one of their facilities has melted down).

And Trump being Trump, he never misses an opportunity to point out his own superiority.

Please watch the video below with the sound on mute. Did any of you actually think it was North Korean propaganda? Probably none of you did. And of course any person being completely truthful would also have the same opinion whether they also watched it on mute or in any other language including Korean. One dead giveaway is the satellite image of North Korea at night with almost no lights contrasted seconds later with a possible future North Korea covered in bright lights.

Despite this, Washington Post reporter Avi Selk went through the pretense on Tuesday that some reporters, upon first viewing the video in Korean, somehow thought it was North Korean propanda. And what are the chances that those same reporters are hostile to President Donald Trump? How about a 100% chance? They very well knew it wasn’t North Korean propaganda but by pretending that was their impression it gave them a disingenuous outlet for their hostility.

And now Selk actually wants us to believe that “Reporters thought this video was North Korea propaganda. It came from the White House”:

Reporters crowded into a Singapore auditorium Tuesday, expecting President Trump to walk out and announce the results of his historic meeting with North Korean leader Kim Jong Un.

Suddenly, two huge screens on either side of the empty podium came to life. Soaring music boomed over the speakers, and the reporters were bombarded with a montage portraying North Korea as some sort of paradise.

In a split-screen shot, Kim Jong Un waved to an adoring crowd while President Trump stood beside him with his thumb in the air. The pair appeared over and over again, like running mates in a campaign video.

The film went on like this for several minutes, with brief interludes of missiles, soldiers and warships interrupting the fanfare. Some journalists, unable to understand the Korean-language narration, assumed they were watching one of Pyongyang’s infamous propaganda films. “What country are we in?” asked a reporter from the filing center.

You are in a liberal bubble country that can’t accept this incredible diplomatic achievement by Trump so you have to go through the silly pretense that you actually thought the video you saw could have been North Korean propaganda even though it very obviously was not. 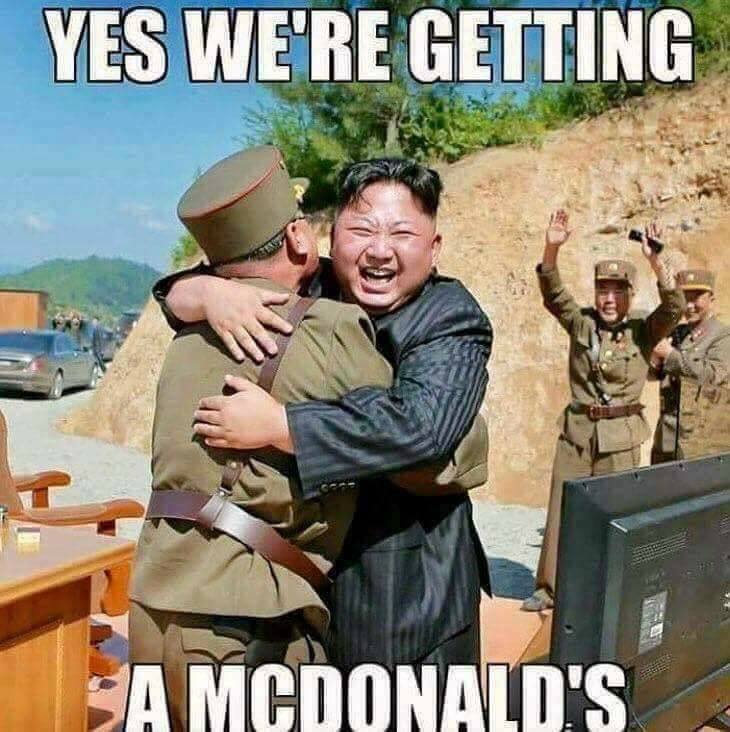