While the left is worshiping windmills and spotted tadpoles, middle America is suffering and can’t make ends meet.

The liberals have forgotten the middle class in America.

They’ve turned their backs on them to focus on elites, Wall St., illegals, and refugees.

Because of this, and globalization, the middle class has been decimated.

President-elect Trump plans to obliterate Obama’s GLOBAL WARMING policies to bring ENERGY jobs back to Americans who are in desperate need.

Trump may eye the Keystone pipeline, coal, and copper and crude, for job opportunities.

President Obama’s eight-year effort to rein in the energy and mining industries with environmental regulations will likely come to a halt under President-elect Donald Trump, who is poised to green-light key job-creating projects from the Atlantic Coast to Alaska.

“I think 80 percent of President Obama’s policies will be reversed very soon after Trump moves into the White House,” Robert McNally, the president of the Rapidan Group, the energy consulting firm, and former official in the George W. Bush administration, told FoxNews.com. “The Trump administration will reverse the global warming principles enacted under Obama and he will stop the politicization of infrastructure. This will definitely spur on the growth of the oil and gas industries.”

Australia’s Parliament House hosts a discussion about the CO2 Scam. Senator Malcolm Roberts discusses the CSIRO and how it used to be a reliable source of science. A talk is given by Canadian climatologist Tim Ball, who is being sued by climate fraudster Michael Mann. Tony Heller also speaks. It also may be illuminating to listen to Dr Art Raiche, former chief scientist at CSIRO here;

Green Incoherence: Reaching Out to the Deplorables 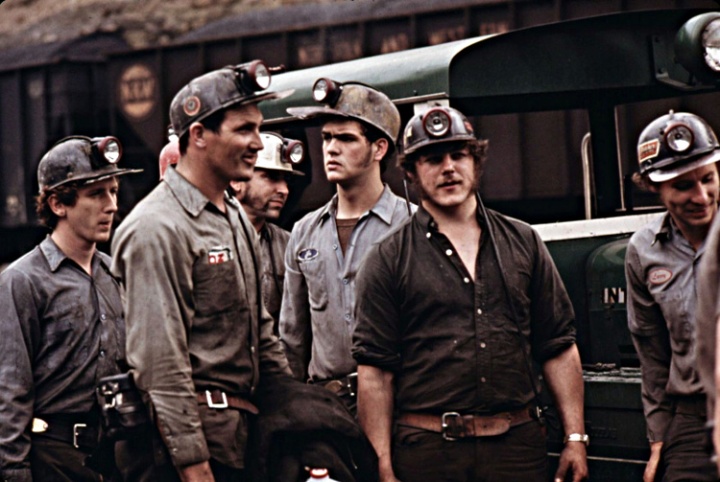 GROUP OF MINERS WAITING TO GO TO WORK ON THE 4 P.M. TO MIDNIGHT SHIFT AT THE VIRGINIA-POCAHONTAS COAL COMPANY MINE. By Corn, Jack, 1929-, Photographer (NARA record: 8464440) (U.S. National Archives and Records Administration) [Public domain], via Wikimedia Commons

Realisation is growing amongst greens that the left has lost touch with the working class, particularly the white working class – but how do greens reach out to people whom they openly describe as “deplorable”?

The pop-punk band released their twelfth studio album ‘Revolution Radio’ in October, their first record since 2012. Speaking to NME in this week’s magazine, available nationwide now, Armstrong compared billionaire TV personality-turned-Republican candidate Trump to Hitler and bemoaned the current state of US politics.

Describing those backing Trump as “uneducated white working-class people”, Armstrong added: “That’s the problem right there. There’s this white nationalism that’s been brewing under the radar for a long time. But now [Trump’s] been able to cause people to lash out and blame minorities and it’s really confusing. I mean, blatant misogyny going on at the same time.”

The singer also admitted that some members of his family are going to vote for Trump in the upcoming US election. He said: “I’ve got family members from Oklahoma that are big Trump supporters. And there’s no clear answer on why they’re supporting him because he doesn’t even have any policies.”

At least some Democrat green supporters realise that the only way they’ll ever regain the White House is to reach out to these “stupid” working class people.

During an interview on CBS News’ This Morning, former presidential candidate, Sen. Bernie Sanders weighs-in on “what went wrong” in the 2016 presidential election. “This is what I think what went wrong- is what Trump did, very effectively, is tap the angst and the anger and the hurt and the pain that millions of working class people are feeling,” says Sen. Bernie Sanders. “I think there needs to be a profound change in the way the democratic party does business. It is not good enough to have a liberal elite. I come from the white working class. I am deeply humiliated that the democratic party cannot talk to the people from where I came from,”

How do you pack activists who think working class people are uneducated deplorables, into the same tent as people who see the working class as the grassroots of a Democrat renaissance?

The answer apparently is lots of government handouts for green energy.

May Boeve, the director of international climate group 350.org, which during the Obama presidency fought and won against the Keystone oil pipeline that is now back on the agenda, said building alliances with Trump’s heartland would be key.

“The best way to unite a progressive coalition with working class voters is to push for a 100% renewable energy economy that works for all,” she said. “Clean energy remains the greatest potential job creator in the 21st century, while climate change is still our greatest threat.”

Its a bit difficult to arrange government handouts when most of your political allies have been booted out of office. But who knows, maybe business now embraces blowing profits and executive bonus cash on green boondoggles, even without government financial support.

… “Ten years ago, US business wasn’t on board about tackling climate change,” said Craig Bennett, CEO of Friends of the Earth in the UK. “This time round you have a situation where US businesses and businesses more globally [support action], so this time around the environmental movement does not feel like it is on its own. We’re much better placed to fight this.” …

Lets not underestimate the ability of Democrats and the Green Movement to pack people with incompatible views into the same tent – but this particular outreach and reconciliation excercise should be very entertaining to watch. Who knows, maybe Billie Joe could kickstart the process, by staging a “stupid white people” live music tour of America’s mining towns.