Donald Trump isn’t just skeptical about global warming. He is what the alarmists would call a full-on climate change “denier”. 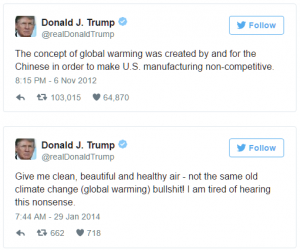 No world leader has ever been this outspoken on climate change. The only other one to have come close to this position was former Australian Prime Minister Tony Abbott – but he just didn’t have the support base to maintain it and was ousted in a coup staged by one of the climate alarmist establishment, Malcolm Turnbull.

But with a climate skeptic running the most powerful nation in the world, the $1.5 trillion per annum climate change industry is going to start to unravel big time. A Trump presidency is likely to be good news for fossil fuels (and heavy industry that needs cheap energy to survive); and very bad news for renewables.

To get an idea of the horrors to come for the greenies, look at how they reacted to the prospect of his new Environmental Protection Agency Dismantler-in-Chief Myron Ebell.

Here’s how Newsweek views him:

Ebell is sometimes described as climate denier-in-chief, and he revels in it, crowing in his biography that he’s been called one of the leading “misleaders” on climate change and “villain of the month” by one environmental group. David Goldston, a policy analyst at the Natural Resources Defense Council Action Fund, says Ebell “doesn’t believe in climate change and wants to reverse the advances we’ve had in environmental protection and decimate—if not utterly destroy—the Environmental Protection Agency.” The Competitive Enterprise Institute, Ebell’s employer, “has done everything it can politically and through litigation to block any forward movement on climate and to try to harass anybody who is trying to get forward movement,” Goldston says.

Ebell is also the chairman of the Cooler Heads Coalition, more than two dozen nonprofit groups “that question global warming alarmism and oppose energy rationing policies,” according to the coalition’s website. Those positions line up nicely with Trump’s goals, which include “saving” the coal industry, reviving the Keystone XL oil pipeline and expanding offshore oil drilling.

Ebell has attacked nearly every aspect of Obama’s environmental policies and accomplishments. He has said that the president’s decision in September to sign the Paris climate accord—which commits nations to sharp reductions in the greenhouse gas emissions responsible for climate change—was “clearly an unconstitutional usurpation of the Senate’s authority” because treaties need approval by two-thirds of the Senate. (The White House argued that it was an agreement, not a treaty.) In a speech in August at the Detroit Economic Club, Trump said he would cancel the agreement and stop all payments of U.S. tax dollars to U.N. climate change programs.