“IN a brilliant strategic move, it was decided that
the environmentalist movement was a new and
promising vehicle for obtaining political influence and power.”
– Jennifer Marohasy PhD 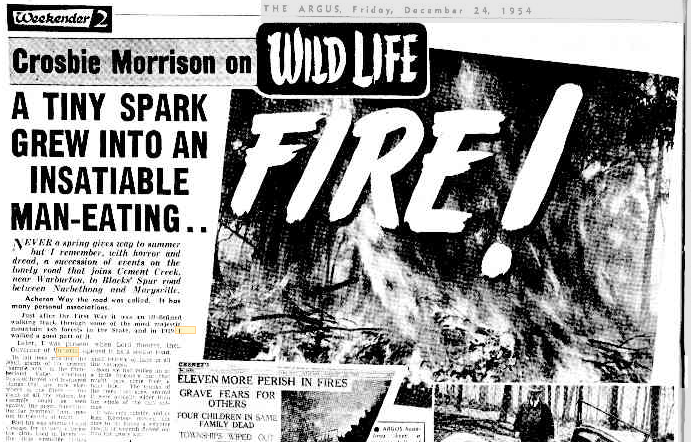 AUSTRALIAN ‘conservative’ environment Minister Melissa Price is in “No Doubt” that Victoria’s recent bush fires were caused by mankind’s 1 extra carbon dioxide molecule in every 10,000, or an increase of one thousandth of one percent of CO2 over a 150 year period.

AUSTRALIA’S contribution to global plant food and fire-retardant CO2 = 1.3% of all that! 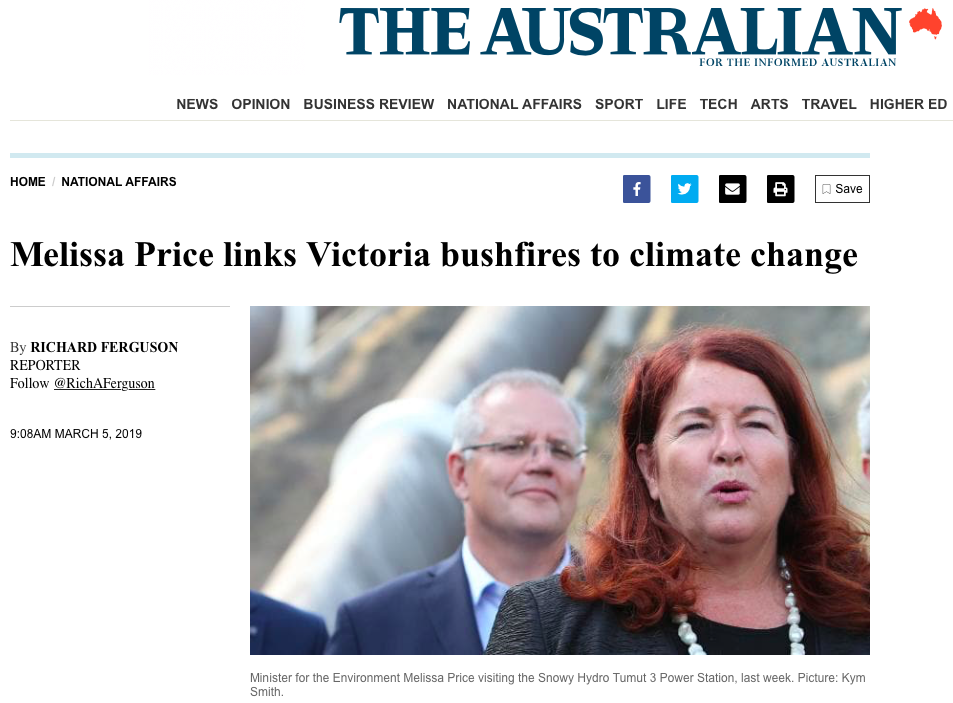 Environment Minister Melissa Price has linked this week’s devastating bushfires in Victoria to climate change, saying there is “no doubt” of its impact on Australia

As Victorians in the state’s east survey the damage done to their properties by bushfires, the Environment Minister said Australians across the nation had suffered from the nation’s hottest summer on record.

“There’s no doubt that there’s many people who have suffered over this summer. We talk about the Victorian bushfires; (in) my home state of Western Australia we’ve also got fires there,” she told Sky News this morning.

“There’s no doubt that climate change is having an impact on us. There’s no denying that.”

Coalition figures, including former prime minister Malcolm Turnbull, have been reluctant in the past to link climate change to recent natural disasters such as bushfires. 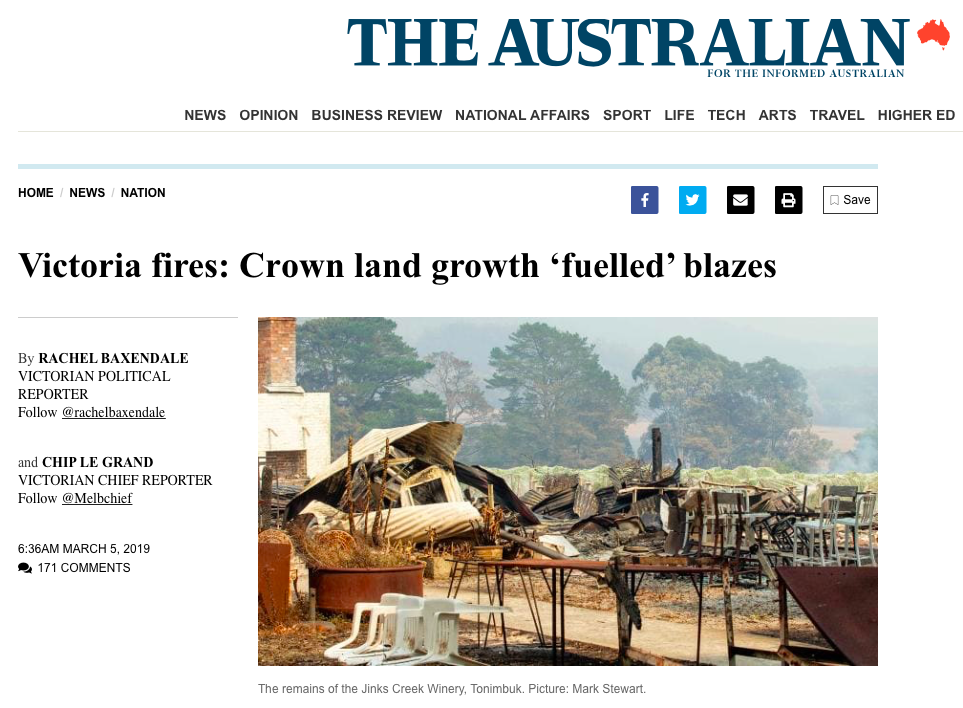 The quiet hamlet of Tonimbuk, about 90km east of Melbourne, felt the brunt of the fire crisis, with seven properties destroyed and 11,000ha burnt by a lightning-strike blaze that raced out of the Bunyip State Forest.

Andrew Clarke, the owner of the Jinks Creek Winery destroyed by the Bunyip fire, believes a bureaucrati­c blunder cost him his life’s work.

He said a planned burn-off in 60ha between his vineyard and the state park was not done because of concerns for local birdlife.

“If they’d been doing the burning off they should have been doing, our place might still be there,’’ he told The Australian.

“They told me birds were nesting. I told them: ‘If we don’t do a burn-off now, there’ll be no birds. There’ll be no goannas, no snakes, no wallabies. They’ll all be bar­becued.’’

Another Tonimbuk resident, cartoonist Mark Knight, said some residents were left to defend their homes without assistance from the CFA. “We fought this fire for three days on our own,’’ he said. “Black Saturday they were all over us. They were fantastic. We didn’t see them this year.’’ 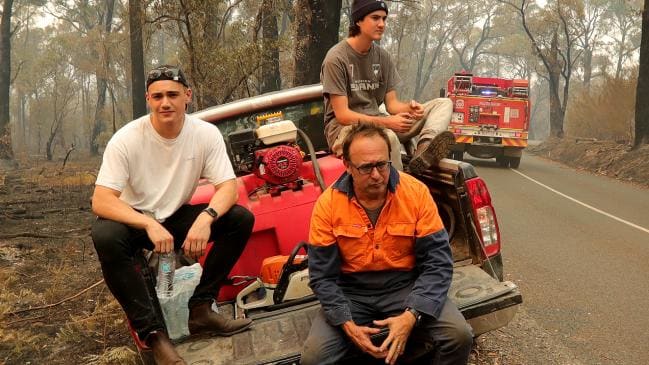 Mark Knight with his sons Jack & Elliott, in Tonimbuk, managed to save their property after a bushfire engulfed the Bunyip state forest in Victoria. Picture: Stuart McEvoy.

THE Daily Telegraph’s climate ‘rationalist’ Miranda Devine with the brutal truth as to what is really fuelling 21st Century bushfires, overrun with ‘Green’ fodder… 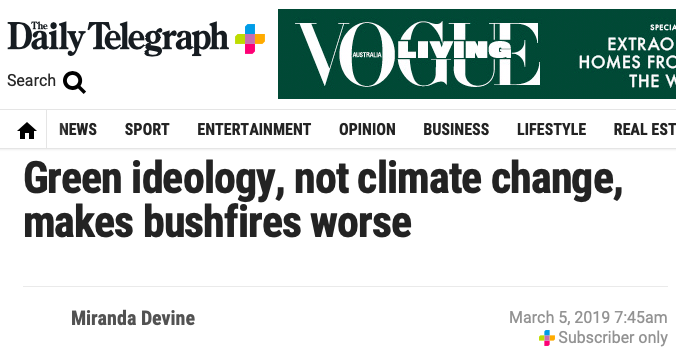 On Tuesday, she linked the fires to climate change, claiming there is “no doubt” of its impact on Australia.

The real culprit is green ideology which opposes the necessary hazard reduction of fuel loads in national parks and which prevents landholders from clearing vegetation around their homes.

The ongoing poor management of national parks and state forests in Victoria and green obstruction of fire mitigation strategies has led to dangerously high fuel loads over the past decade.

That means that when fires do inevitably break out they are so intense that they are devilishly difficult for firefighters to contain. As a federal parliamentary inquiry heard in 2003, if you quadruple the ground fuel, you get a 13-fold increase in the heat generated by a fire.

Locals know the truth. Andrew Clarke, owner of Jinks Creek Winery, which has been destroyed by a fire which raged out of the Bunyip State Forest, “begged” for fuel reduction burns to protect his property.

“I’ve been begging them [Forest Fire Management Victoria] for 20 years to burn off the state forest at the back of our place and still to this day it hasn’t happened,” he told the ABC’s Country Hour.

Clarke said a planned burn-off was called off because of concerns about nesting birds.

So how did that work out for the birds?

But you can bet Premier Daniel Andrews will hide behind the climate change furphy.

Parroting green lies suits politicians because then they can avoid blame for their own culpability.

The Black Saturday Bushfire Royal Commission criticised the Victorian government for its failure to reduce fuel loads in state forests. It recommended more than doubling the amount of hazard reduction burns.

Instead, in the last three years, alone, the Andrews government has slashed the amount of public land being hazard reduced by almost two thirds.

The wonder is that the Morrison government is helping him with his alibi.