It’s worse than we thought! 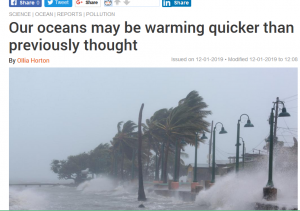 A new report published in the US journal Science, led by the Chinese Academy of Sciences, suggests the world’s oceans are warming 40 percent faster than what a UN panel predicted five years ago. Although data collection is more accurate than in the past, some experts advise against jumping to hasty conclusions.

About 93 percent of excess heat trapped around the Earth by greenhouse gases that come from the burning of fossil fuels accumulates in the world’s oceans.

The UN Intergovernmental Panel on Climate Change (IPCC) says ocean warming has led to rising sea levels and contributes to increases in rainfall intensity, more violent storms and the destruction of coral reefs.

t is also a threat to biodiversity and one of the earth’s major food supplies.

“Ocean heating is a very important indicator of climate change, and we have robust evidence that it is warming more rapidly than we thought,” said co-author Zeke Hausfather, a graduate student in the Energy and Resources Group at the University of California, Berkeley.

Their report relied on four studies, published between 2014 and 2017 whose conclusions are based on measurements recorded by a fleet of some 4,000 floating robot monitors called Argo.

The robtos drift throughout the world’s oceans, every few days diving to a depth of 2,000 meters and measuring the ocean’s temperature, pH, salinity and other information.

Argo “has provided consistent and widespread data on ocean heat content since the mid-2000s,” the report said.

The new analysis shows warming in the oceans is on pace with measurements of rising air temperature.

And if nothing is done to reduce greenhouse gases, “models predict that the temperature of the top 2,000 meters of the world’s oceans will rise 0.78 degrees Celsius by the end of the century,” it said.

There are, however, a number of issues which rather undermine Hausfather’s hype.

For a start, ocean heat content (OHC) is not rising faster than before, simply faster than scientists guessed a few years ago. There is a big difference between the two.

GWPF’s David Whitehouse also puts a dampener on the matter:

“I think you’ve got to be very careful when splicing together two sets of data from two sets of instruments and trying to compare them”, he told RFI, referring to the fact that the study in question pulled together measurements from before the Argo system was up and running.

“They can make a case that the oceans are warming this way, provided you accept that they understand what’s going on and I wouldn’t say that we understand completely about the past instruments.”

“The most sensible thing to do would be to stick to the data since 2006 which is quite good enough to give us a baseline with a coherent data set.”

“If you just look at the Argo array itself, you cannot see this catastrophic, runaway ocean warming in just that data. So I know all scientists will say this, but I’d really like another 15 years of data in order to convince me.”

Amen to that! There are still huge uncertainties in the measurement of OHC, even with Argo buoys. Prior to 2006, we really don’t have a clue. To splice the Argo data onto the prior numbers is not proper science.

But we can delve a little deeper. Willis Eschenbach wrote a very thoughtful piece on WUWT in 2014 about OHC, which is still highly relevant. It is worth reading in full here. With thanks to Willis, I will re-use some of his numbers and concepts here. 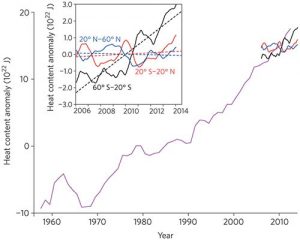 Any claim that OHC is rising as a result of GHGs surely has to explain this inconsistency.

Willis also raised the question of error margins. As Hausfather’s own graph above shows, these are substantial. Indeed when margins of error are factored in, we have no way of knowing whether OHC has risen at all since 2006.

The global Argo dataset is not yet long enough to observe global change signals. Seasonal and interannual variability dominate the present 10-year globally-averaged time series. Sparse global sampling during 2004-2005 can lead to substantial differences in statistical analyses of ocean temperature and trend (or steric sea level and its trend, e.g. Leuliette and Miller, 2009). Analyses of decadal changes presently focus on comparison of Argo to sparse and sometimes inaccurate historical data.

To pretend that the data is accurate enough for the purposes claimed is ridiculous.

To put this concept into perspective, you may note that the Hausfather graph uses zettajoules on the y-axis. One zettajoule is a billion trillion joules, an impressive sounding number, but one that makes no sense at all to most people. 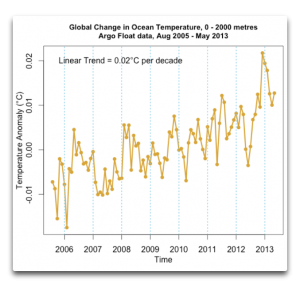 As Willis commented, a linear trend of 0.02C per decade is hardly scary. But more importantly, it simply is not possible to measure the heat content of the world’s oceans to such an accurate degree.

Willis in another post, here, concluded that the claimed error margin of +/-0.003C had been badly underestimated.

Hausfather claims that recent observations “tend to agree quite well with climate model predictions”. I suspect that was the real objective of the exercise all along.

A warmer ocean would be visible in the air temperature measurements (I am not talking about the counterfeited and FAKE graphs), we would also see a higher frequency of hurricanes, typhoons and tropical storms, – we don’t.

All empirical observations are pointing to lower temperatures.