Conservative author Dinesh D’Souza uncovered something that blows the Left’s whole narrative to bits. While they have been throwing around claims that the white supremacist who ran over a protester who was blocking the road is a Republican, D’Souza discovered he actually an Obama-supporting Democrat.

“Rumors abound on white nationalist forums that Kessler’s ideological pedigree before 2016 was less than pure and seem to point to involvement in the Occupy movement and past support for President Obama,” the Southern Poverty Law Center notes in their profile of Kessler.

Kessler didn’t just support Obama; he visited the Oval Office in 2016. Here’s a photo of the two of them having a fun chat:

The Left has no shame in their attempt to link Donald Trump, who repudiated the attacker immediately after the murder occurred, to white supremacists but perhaps they should remember their own party’s history…and its present.

The picture of Jason Kessler and Barry O. Bummer in the article above is apparently photoshopped. Original picture:

Donald Trump gave a speech addressing the violence this past weekend in Charlottesville.

During his speech, the President asked if the “alt-left” bore as much responsibility for the chaos as its extremist counterparts on the alt-right. Following the publication of an erroneous transcript, journalists and liberal pundits are spreading fake news about what Trump actually said in a rush to condemn him.

Politico’s White House reporter Annie Karni was among the first to falsely highlight that Trump had referred to the alt-right as “us” in his speech. “Just noticed the use of ‘us’ in this transcript,” wrote Karni in a now-deleted tweet.

“Okay, what about the alt-left that came charging at us?” she wrongly quoted the president as saying 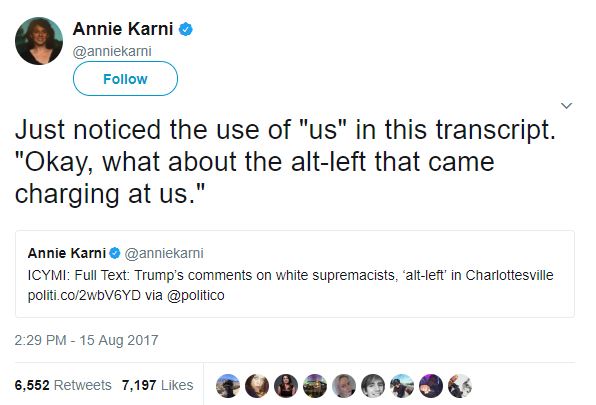 Speaking to the press, Trump stated that members of the “alt-left” (which is commonly understood to be made up of Antifa, Black Lives Matter, and other social justice groups) were equally responsible for violence as their alt-right counterparts.

In the speech, Trump clearly says “Okay, what about the alt-left that came charging at ‘em?”

.@realDonaldTrump gave the media DAYS to call out the antifa, BLM, etc

Instead the #FakeNews covered for them…today it blew up on them. pic.twitter.com/QqDgwenIZD

As Karni’s tweet made the rounds on Twitter, some—including CNN’s Brian Stelter cast some doubt on the transcript. “Transcript may be funky,” he wrote.

Others, like New York Times’ Maggie Haberman, were less discerning and more eager to spread the fake news to thousands of her followers.

Haberman corrected herself after dozens of people who listened to the clip pointed out the falsehood.

Despite her corrections, variations of the fake news continued to circulate on Twitter as some. One user, Brian Klaas, jumped to erroneous conclusions and wondered if Trump had made a Freudian slip. “Trump lumps himself with his white supremacist supporters,” wrote Klaas in a now-deleted tweet. 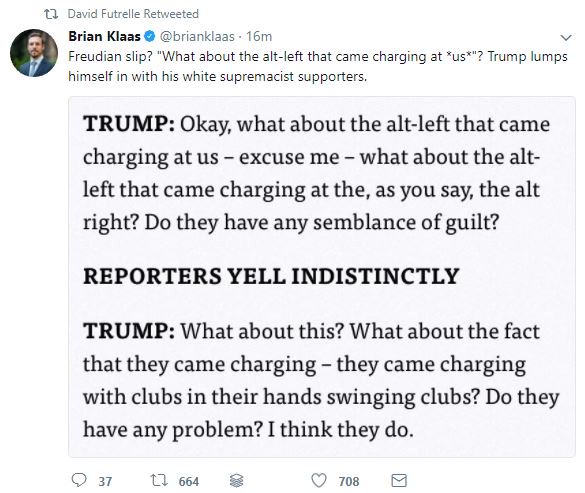 The fake news stems from Politico’s inaccurate transcription of Donald Trump’s speech. A snapshot of the transcript on Archive.is reveals the presence of the fake quote.

The updated version of the transcript fixed the error, but did not acknowledge that any edits were made. Following complaints on Twitter, the transcript has been updated with a correction at the bottom.

“In a review of the audio, we could not definitively discern Trump’s exact words at that moment in the news conference,” the site claims. Rather puzzlingly, Politico had no problem peppering “REPORTERS YELL INDISTINCTLY” throughout the piece.