“We get a tax credit if we build a lot of wind farms. That’s the only reason to build them. They don’t make sense without the tax credit.” – Warren Buffett

“Suggesting that renewables will let us phase rapidly off fossil fuels in the United States, China, India, or the world as a whole is almost the equivalent of believing in the Easter Bunny and Tooth Fairy.” – James Hansen (The Godfather of global warming alarmism and former NASA climate chief) 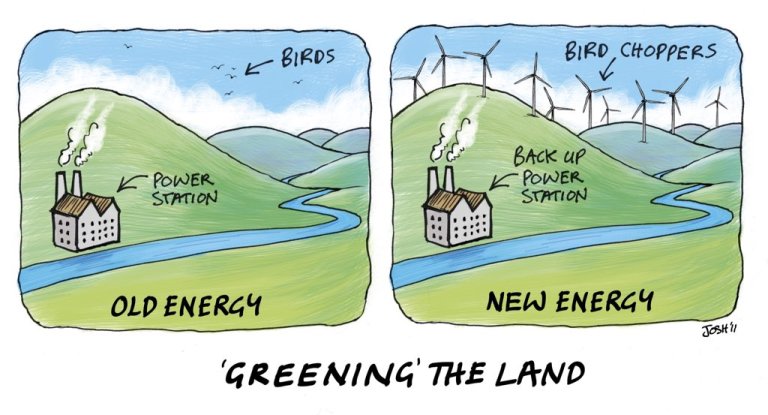 Greening The Land | Cartoons By Josh

A MUST READ for all policy makers if they have any respect for the families, workers and the most vulnerable in their communities whose lives are being broken as a consequence of the mad rush into feel-good UNreliables – wind and solar ‘power’…

WHY “GREEN” ENERGY IS FUTILE, IN ONE LESSON

Posted on January 31, 2019 By John Hinderaker In Eenergy Policy, Environment

Here in Minnesota, we are enduring a brutal stretch of weather. The temperature hasn’t gotten above zero in the last three days, with lows approaching -30. And that is in the Twin Cities, in the southern part of the state. Yesterday central Minnesota experienced a natural gas “brownout,” as Xcel Energy advised customers to turn thermostats down to 60 degrees and avoid using hot water. Xcel put up some customers in hotels. Why?

Because the wind wasn’t blowing. Utilities pair natural gas plants with wind farms, in order to burn gas, which can be ramped up and down more quickly than coal, when the wind isn’t blowing.

Which raises the question: since natural gas is reliable, why do we need the wind farms? The answer is, we don’t. When the wind isn’t blowing–as it wasn’t yesterday–natural gas supplies the electricity. It also heats homes, and with bitter cold temperatures and no wind, there wasn’t enough natural gas to go around. The resulting “brownout” has been a political shock in Minnesota.

Isaac Orr, a leading energy expert who is my colleague at Center of the American Experiment, explains this phenomenon in detail:

[W]ind is producing only four percent of electricity in the MISO region, of which Minnesota is a part.

While that’s not good, what’s worse is wind is only utilizing 24 percent of its installed capacity, and who knows how this will fluctuate throughout the course of the day.

This is exactly why the renewable energy lobby’s dream of shutting down coal, natural gas, and nuclear plants and “replacing” them with wind and solar is a fairy tale. It simply cannot happen, because we never know if and when the wind will blow or the sun will shine when we need it most.

“But the wind is always blowing somewhere” ~ a renewable energy lobbyist

Renewable energy apologists often argue that although the wind may not be blowing in your neighborhood, it’s blowing, somewhere. All we have to do, they argue, is build wind turbines and transmission lines all over the country so we can have renewable energy everywhere. It turns out this old chestnut is also completely wrong.

For example, the wind isn’t blowing in North Dakota or South Dakota, where more than 1,800 MW (a massive amount) of wind projects are operating or planned, at massive cost, by Minnesota electric companies.

Just look at California, the state that is consistently the most self-congratulating about how “green” they are. Wind is operating a 3 percent of installed capacity, solar is operating at 12 percent, natural gas is running wide open, and California is importing a whopping 27 percent of its electricity from Nevada and Arizona.
***
Days like today perfectly illustrate why intermittent, unreliable sources of energy like wind and solar would have no place in our energy system if they were not mandated by politicians, showered with federal subsidies, and lining the pockets of regulated utilities that are guaranteed to profit off wind and solar farms whether they are generating electricity, or not.

Lawmakers considering doubling Minnesota’s renewable energy mandate to 50 percent by 2030 should use this week’s weather as a moment to reconsider their plans to lean so heavily on wind and solar.
***
[C]oal-fired power plants provided 45 percent of MISO’s power and nuclear provided 13 percent — most of this from Minnesota’s Prairie Island and Monticello nuclear plants (which we should keep open, by the way). Natural gas provided 26 percent of our electricity use at that time, and the remainder was imported from Canada and other U.S. states.

Natural gas also heated the homes of approximately 66 percent of Minnesotans this week, by far the most for any home heating fuel, but there wasn’t enough gas to combat the frigid temperatures.

Because of the extreme cold, Xcel Energy urged its natural gas customers in Becker, Big Lake, Chisago City, Lindstrom, Princeton and Isanti to reduce the settings on their thermostats, first down to 60 degrees, then to 63, through Thursday morning to conserve enough natural gas to prevent a widespread shortage as temperatures remained 14 below zero. Some Xcel customers in the Princeton area lost gas service, and Xcel reserved rooms for them in nearby hotels.

This week’s urgent notice from Xcel to conserve natural gas shows there is real danger in putting all of our eggs into the renewables-plus-natural gas basket. At a minimum, pursuing a grid powered entirely by solar, wind and natural gas would require more natural gas pipeline capacity, which is likely to be opposed by the factions that are currently challenging the replacement of the Line 3 pipeline.
***
If Minnesota lawmakers are sincere in their belief that we must reduce carbon dioxide emissions as soon as possible, they must lift Minnesota’s ban on new nuclear power plants, which has been in place since 1994.

Not only would nuclear power plants be essentially guaranteed to run in minus-24-degree weather, but a forthcoming study by American Experiment has found that new nuclear power plants could not only achieve a lower emissions rate by 2030, but also save Minnesota $30.2 billion through 2050.

Stay tuned. We will release that report in two weeks. I think it will be a bombshell, not only in Minnesota but in other states that are fecklessly mandating ever-higher utilization of intermittent, unreliable, inefficient “green” energy.

STATE Of The Climate Reports :

Of course, also the EU has “green energy” victims:

As US Freezes, This Is Where Europeans Can’t Afford To Heat Their Homes

While the US Midwest suffers with below-Arctic temperatures, winter tightens its icy stranglehold on Europe,where a considerable number of people are struggling to keep their homes warm.

Statista’s Niall McCarthy reports that, according to new data released by Eurostat, eight percent of the EU population couldn’t afford to adequately heat their homes in 2017. That still represents an improvement on recent years, particularly 2012 when it peaked at 11 percent. 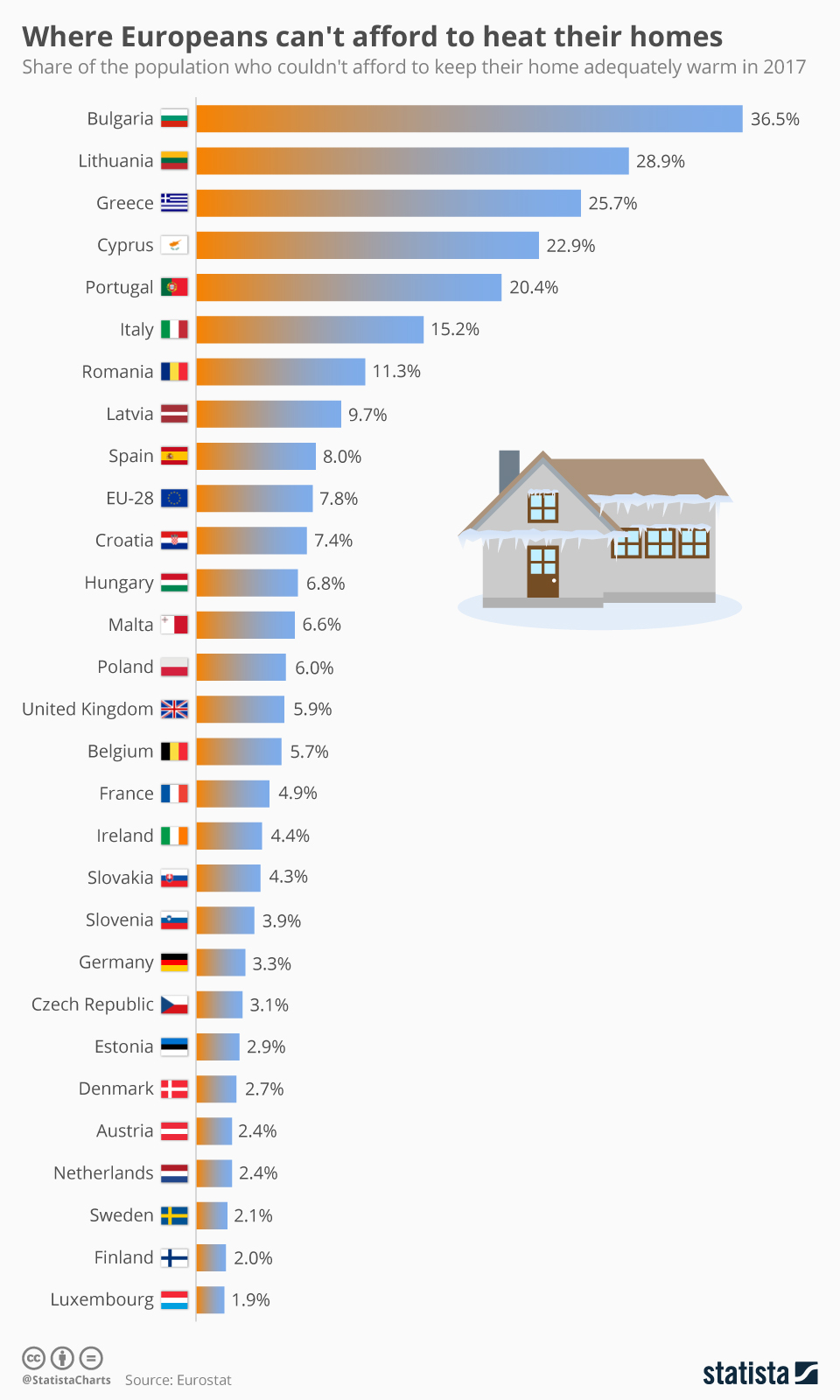 You will find more infographics at Statista

Among member states, the largest share of people who could not afford to properly heat their home was recorded in Bulgaria at 36.5 percent. It was followed by Lithuania (28.9 percent) and Greece (25.7 percent). The lowest figures were recorded in Luxembourg (1.9 percent), Finland (2.0 percent) and Sweden (2.1 percent).

Remember last winter? 1 dead every 7 minute in the UK alone because of high energy prices during the freezing cold winter. 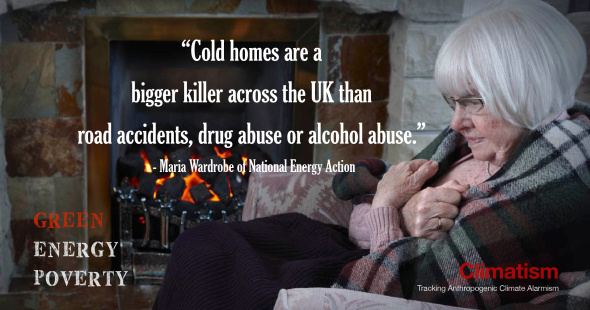 SEE now what their panic-making has inspired – symbolic global warming schemes that have hurt us infinitely more than any slight, and most probably beneficial, global warming ever could…