The United States pays well over its fair share in funding the United Nations, and while Democrats delight in funding the institution, and many question the applicability of defunding measures, a better solution would be to simply leave.

The U.S. is by far the largest financial contributor to the U.N., paying for, according to National Review, “about 22 percent of the regular operating budget, and close to 30 percent of the much larger peacekeeping budget.”

Yet Democrats are determined to oppose any defunding plans. Any attempt to do so would be unsuccessful and end up harming Republicans who would make such a push.

Andrew McCarthy, of the National Review, has an easy solution: The U.S. should leave the U.N.

At best, denying our annual $3 billion payment would accomplish nothing. Defunding measures are called for periodically, whenever the U.N. induces a congressional tantrum over one or another of its obscenities. Even as one lawmaker fumes about shutting off the spigot, another is already saying, “Well, we don’t need to defund everything — after all, the U.N. does a lot of good.”

“A lot of good,” by the way, is an exaggeration. Sure, some U.N. officials are just as well-meaning as any other preening progressive. But the institution stinks, even in its humanitarian aid work. As Heritage’s Brett D. Schaefer notes, citing a 2012 academic study on best and worst practices among aid agencies, U.N. agencies consistently rank “among the worst and least effective performers.”

Why pour huge amounts of money into the worst and least effective organizations and maintain that the multi-national effort is necessary simply because it is multi-national?

The U.N. is a money hole, schemed up to provide the illusion that diplomacy needs bureaucracy. It has become an idol for worshipers of multi-culturalism who can’t accept that nations should be individual and free from the whims of the world.

While the U.N. proves its ineffectiveness again and again, it sucks American taxpayers dry at a hugely unbalanced rate. As anti-American as the U.N. is, the U.S. makes the institution valid.

The American taxpayer’s U.N. tab far exceeds the combined $2.5 billion ponied up by the other four permanent Security Council members (China, Russia, Britain, and France). In fact, it exceeds the contributions of 185 countries combined (about three dozen of which pay under $30K in dues […]

The U.N. is the Islamist-Leftist vehicle for nullifying American constitutionalism – its guaranteed freedoms and the very premise that the People are sovereign. In just the last few years of Obama’s eager collaborations, the U.N. has produced resolutions that erode First Amendment liberties, calling on member states to outlaw negative criticism of Islam. It has overridden the Constitution’s protections against treaties that harm American interests, endorsing the Iran nuclear deal to give it the imprimatur of international law even though it is unsigned, unratified, and would not have had a prayer of attaining the required two-thirds supermajority Senate approval. 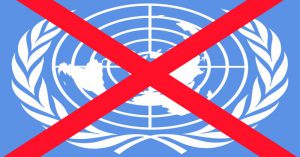 The U.S. is disproportionately funding a collaborative effort to upend American principles. McCarthy makes it painfully clear to anyone still harboring doubt that leaving the U.N. is the right thing to do.

[…] Think about it: We are voluntarily entered into an arrangement in which actions affecting American national security and prosperity are subject to the Security Council veto power of Vladimir Putin and the Communist Party of China – the principal patrons of the “Death to America” regime in Iran, the world’s leading sponsor of anti-American terrorism. We are voluntarily underwriting an institution that — with Obama having formally boarded the anti-Israel train — is joining the anti-Israel Boycott, Divestment, and Sanctions movement. The General Assembly, which is steered by the sharia-supremacist Organization of Islamic Cooperation, has just created a BDS database to target companies that do business with Israeli settlements in what the U.N. has declared is “Palestinian territory.”

The answer doesn’t reside in paying less to an institution that clearly works against the U.S. and its allies while strengthening our enemies.

We must recognize the United Nations for what it really is and leave.