In June of 1988 testimony was provided before Congress by various scientists, including NASA’s Dr. James Hansen, claiming that man made greenhouse gas emissions were responsible for increasing global temperatures with the New York Times reporting, “Global Warming Has Begun, Experts Tells Senate”.

The Times article noted that “The rise in global temperature is predicted to cause a thermal expansion of the oceans and to melt glaciers and polar ice, thus causing sea levels to rise by one to four feet by the middle of the next century. Scientists have already detected a slight rise in sea levels.”

The latest updated NOAA coastal tide gauge measurement data shows locations likely to experience only inches of sea level rise by mid century (not one to four feet as climate alarmists speculated to Congress in 1998) with that increase consistent with long standing and unchanging rates of sea level rise measured at these coastal locations.

The longest NOAA tide gauge data record is at the Battery, New York with a 162 year long measurement period. This location along with all other NOAA U.S. coastal locations show no sea level rise acceleration occurring over the past 30 years despite scientifically flawed assertions otherwise by climate alarmists. 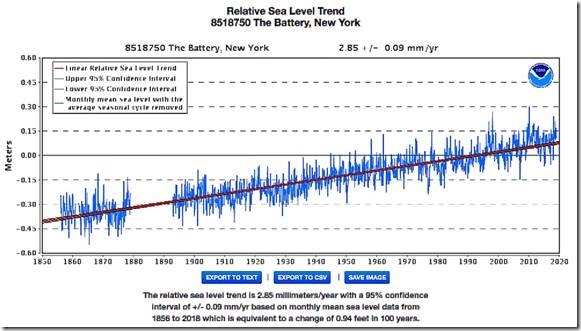 Dr. Judith Curry recently conducted an interview presented at WUWT where she addressed the political drivers behind the climate alarmism campaign which distinguish it from being a genuine scientific endeavor. She offerred the following comments:

“Sea level is rising, but this has been gradually happening since the 1860s; we don’t yet observe any significant acceleration of this process in our time.” Here again, one must consider the possibility that the causes for rising sea levels are partly or mostly natural, which isn’t surprising, says Curry, for “climate change is a complex and poorly understood phenomenon, with so many processes involved.”

“Climatology is becoming an increasingly dubious science, serving a political project,” she complains. In other words, “the policy cart is leading the scientific horse”

NOAA’s coastal tide gauge measurement data are systematically ignored by climate alarmist propaganda campaign activists and media. That action represents a clear condemnation of any scientific validity regarding their efforts.