Image: The Arctic could be ice-free by 2040. You’ve been warned. (Geo Awesomeness, 2017) But why worry about that, according to other alarmists the world will end in 12 years ..

During the winter of 1922, there was no sea ice around Spitzbergen (Svalbard.) The water had warmed by 12C and it was too warm for seals.  There was a radical change in climatic conditions, with unheard-of high temperatures.

This year, there is lots of ice around Svalbard, and ice in the Barents and Kara Seas is very close to the 1981-2010 median edge. 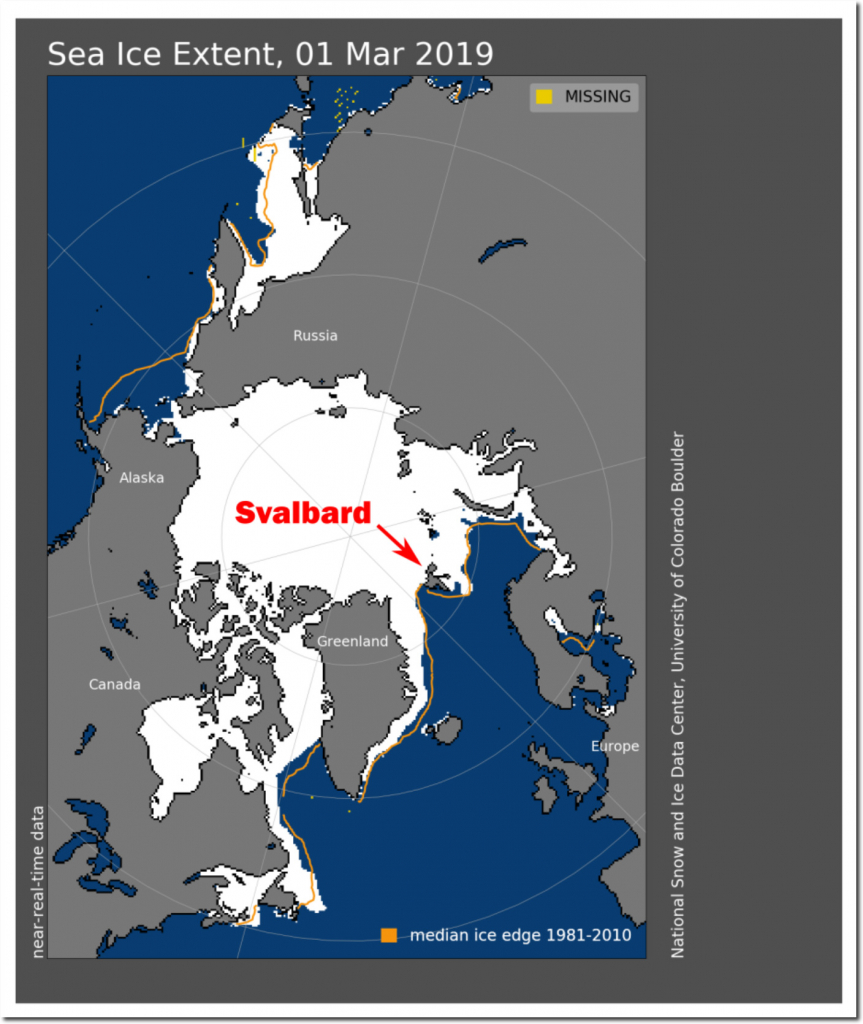 Temperatures are very cold there, and the ice is growing rapidly. 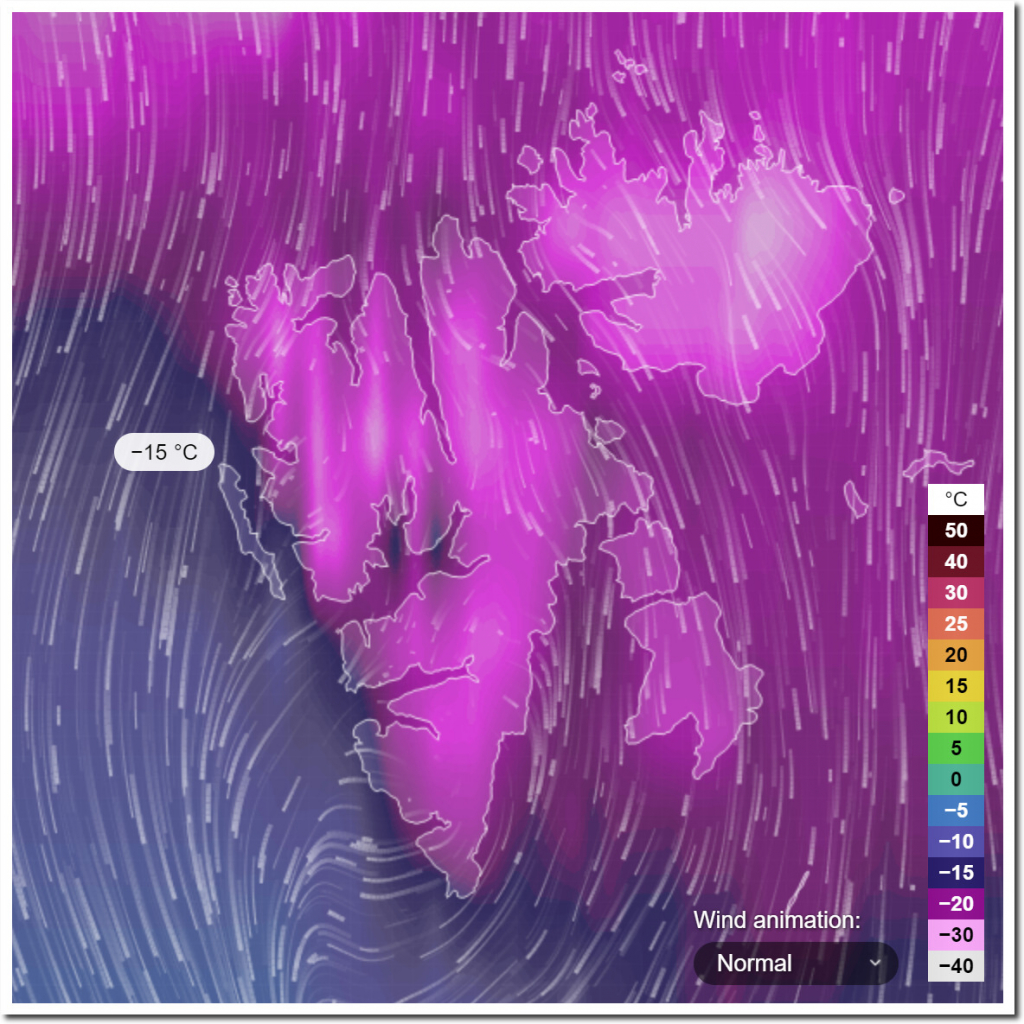 Experts describe this increase in ice since 1922 and normal ice conditions – as a tipping point of global warming. As is normally the case, the data shows the exact opposite of  claims made by climate scientists. 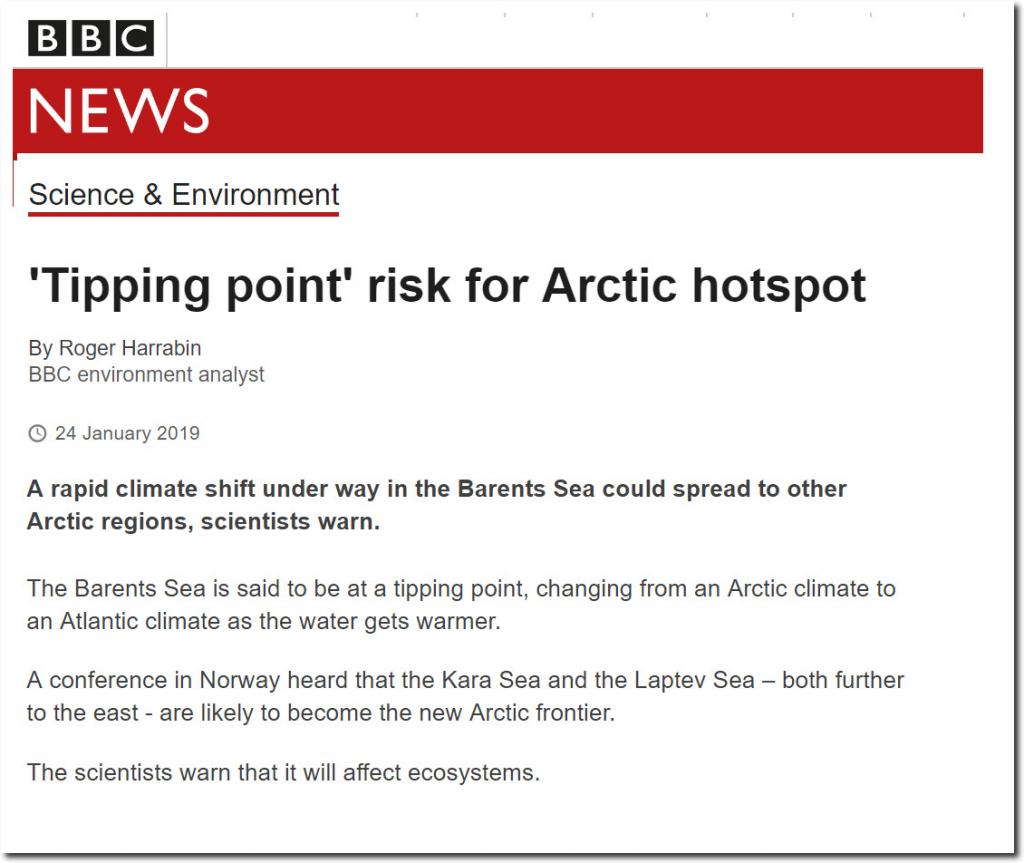 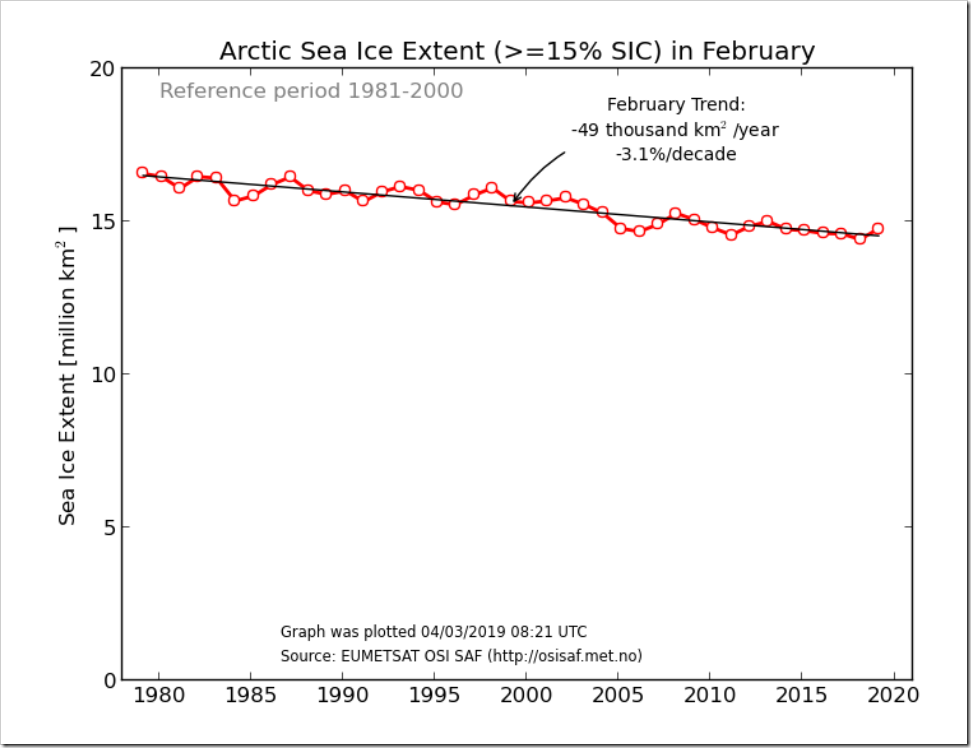 You may wonder why you have not heard much about Arctic sea ice death spirals and Greenland heatwaves this winter.

Hardly surprising, because the Arctic stubbornly refuses to follow the agenda.

Average sea ice extent last month was the highest since 2013, and stands as high as it did in 2005.

Is it any wonder so many people distrust the Met Office these days, when they only give us half the story? 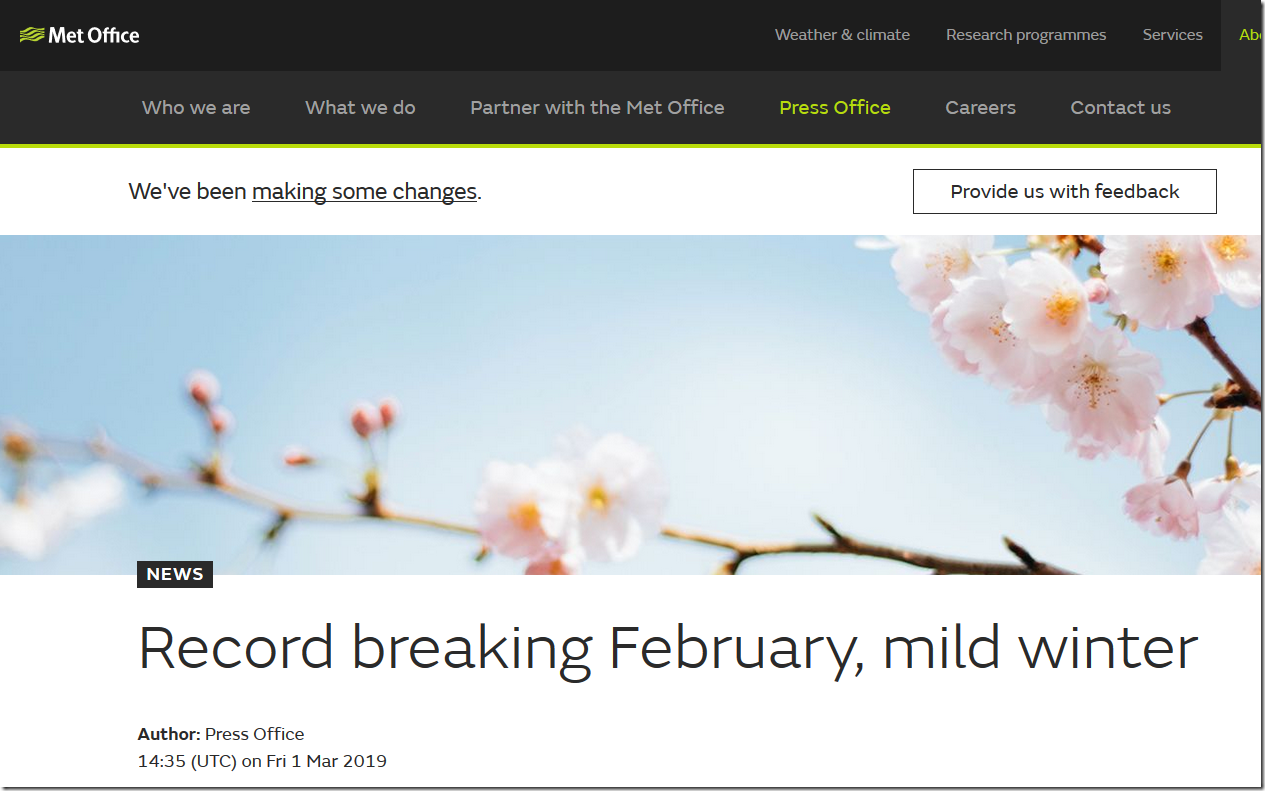 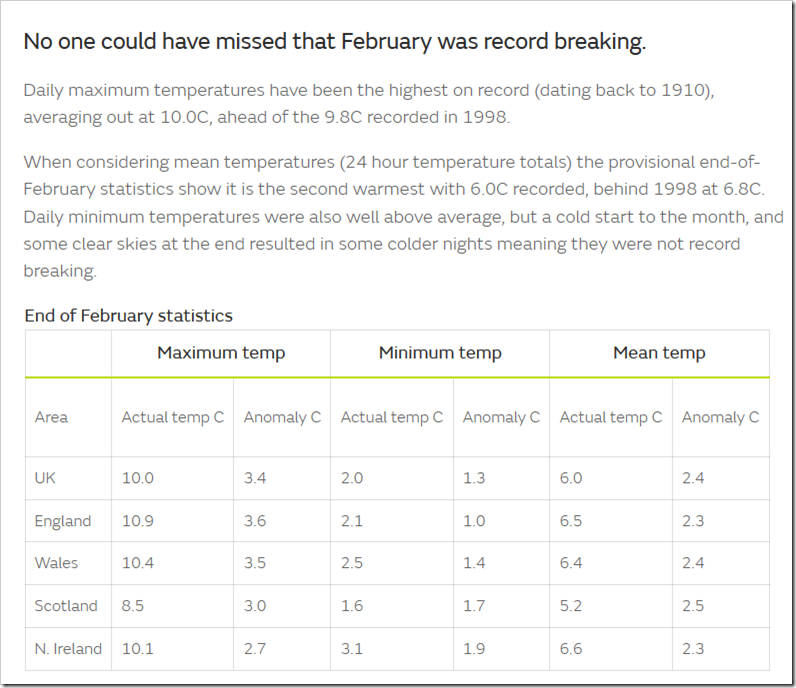 Note the reference to “records dating back to 1910”.

Yet nowhere is there any mention that they have records dating back to the 1659, the CET, which show that February was far from record breaking:

As a taxpayer funded, public body, the Met Office have a duty to impartially publish all of the relevant facts, and not just the ones which suit their agenda.

As an aside, it is worth noting that the Met Office rarely even to bother put stories on their blog any longer, probably because of too many adverse comments. The last story was two months ago, and that was only to pat themselves on the back about an award to one of their staff. 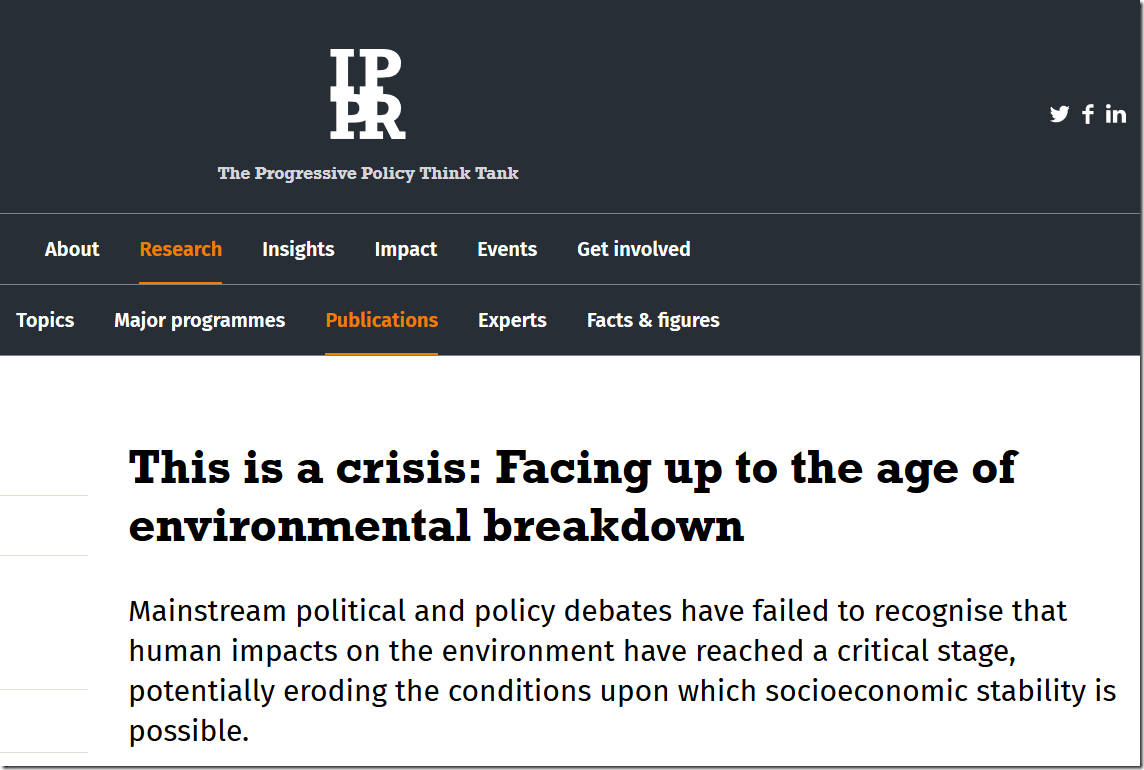 As we now know, the BBC has now withdrawn claims in their original report last month, based on the above IPPR paper, that since 2005, the number of floods across the world has increased by 15 times, extreme temperature events by 20 times, and wildfires seven-fold.

The BBC has also added this update:

This does raise the intriguing question who blinked first, the BBC or IPPR.

But let’s see just how the IPPR have changed their report:

This is how the Summary compares:

And in the detailed section, on P13: 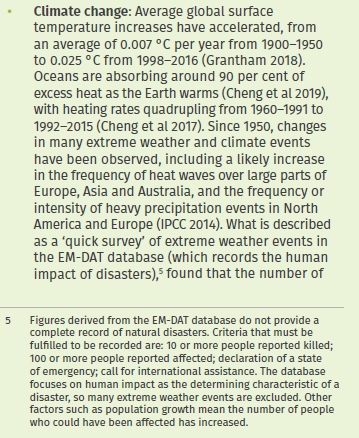 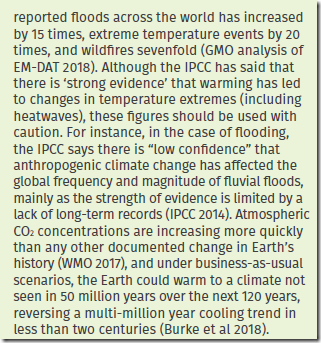 Despite the much greater elaboration in the new version, the difference between the two is quite stunning.

The original gave an almost cataclysmic account of how climate change was wrecking the environment. The new effectively states no more than these facts:

1) That summers are a bit hotter, (but unmentioned is that winters, springs and autumns are less cold, probably a good thing on balance)

2) Droughts are less pervasive in North America than they used to be.

There are, and will always be, regional variations in climate. But there is no evidence that the ones we have seen in recent decades have anything to do with global warming at all.

In short, the original paper claimed climate change as one of its main causes of “environmental breakdown”, the others being extinctions and topsoil loss.

That argument has now been destroyed.

Laughably they now describe the whole basis for their absurd extreme weather claims as “a quick survey”.

If they have really based a large chunk of their paper on a “quick survey”, it hardly inspires much confidence in the rest of it!

But maybe we ought to check one of their other main assertions, that 30% of the world’s arable land has become unproductive:

Strange that, because according to the UN’s own figures from FAOSTAT, the area harvested for crops has been at record highs lately: 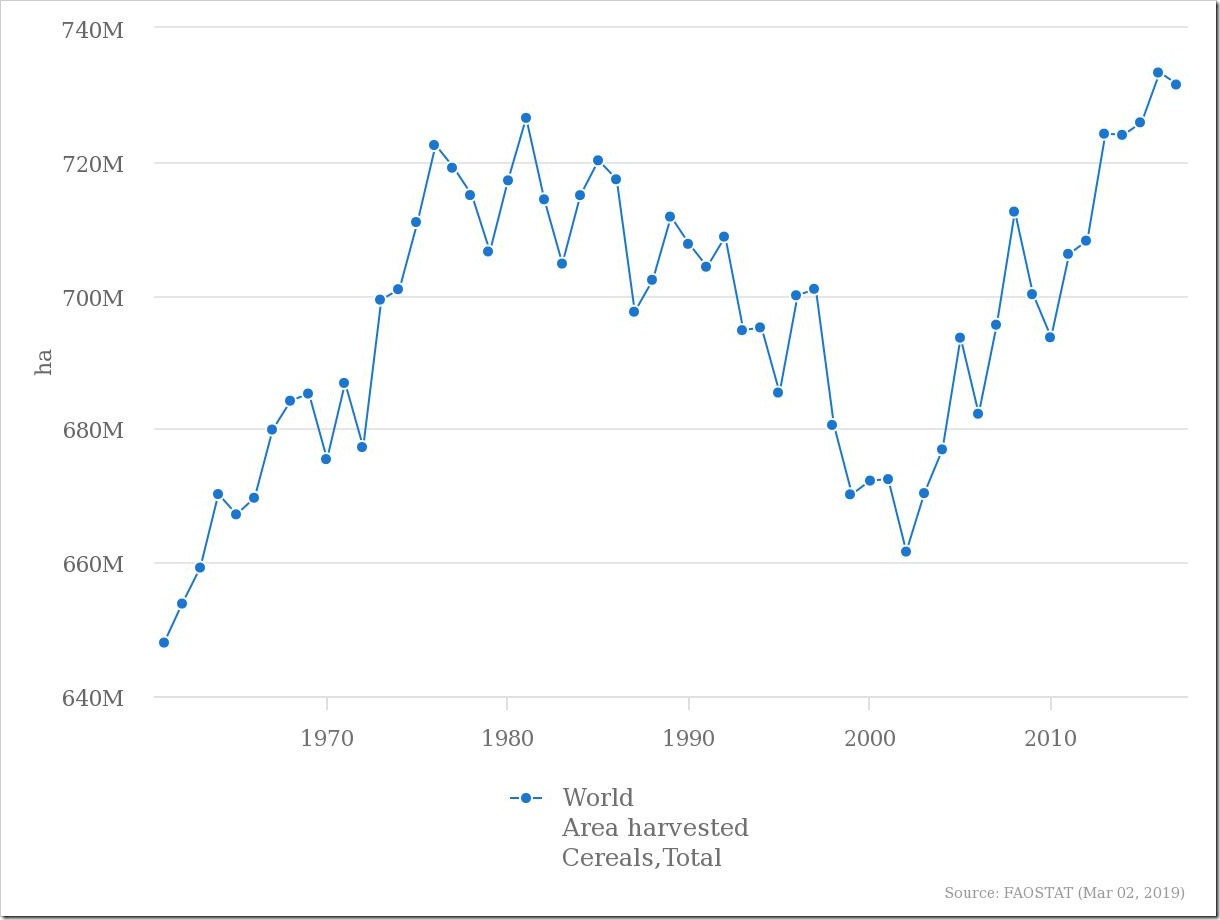 As for “unproductive”, the actual figured speak for themselves: 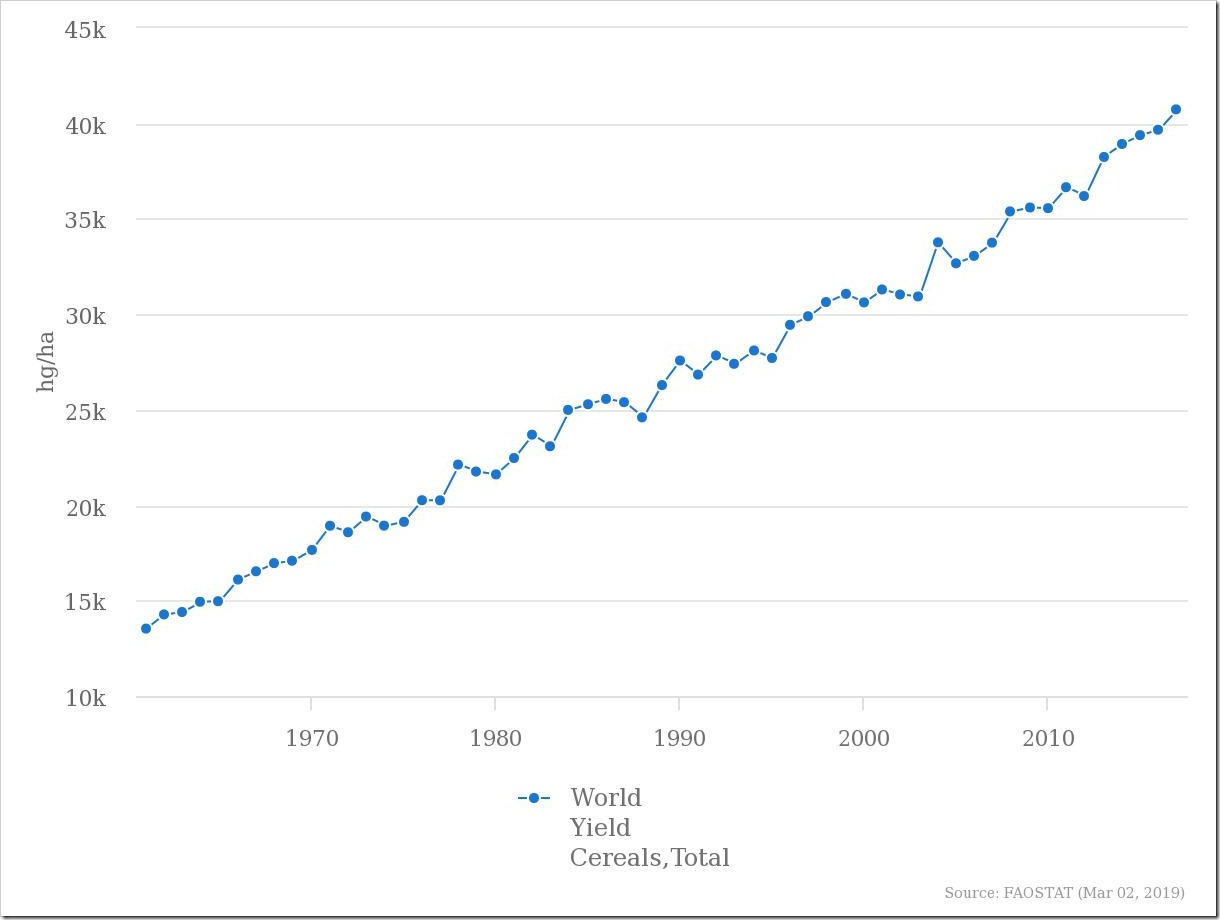 It is hard to avoid the conclusion that the IPPR paper is little more than an incompetent attempt to spin dodgy data in support of a left wing political agenda.

Whatever its motivation, its credibility is clearly holed below the waterline, and the whole thing should now be formally retracted, before it does any more damage to the IPPR’s reputation.

As for those incompetent authors, the IPPR now need to seriously consider whether they can afford to continue to employ them any longer.