Ever since the American Geophysical Union (AGU) – an international coalition of scientists – announced last April that it would be “continuing our current engagement [with] ExxonMobil,” activists spearheading the #ExxonKnew campaign have been working pretty hard to convince the AGU to change its mind and cut ties with the company entirely.

But late last week, AGU’s board of directors announced that after looking at the evidence again, it would not be ending its relationship with Exxon. “After another careful and systematic review of hundreds of pages of both newly provided and previous documentation and a thoughtful and comprehensive discussion,” AGU said, the group will “continue engagement” with ExxonMobil.

Not only did AGU reject activists’ wishes, it also took the #ExxonKnew argument to task. As the AGU explains,

“As we have said previously, we are very interested in the investigations by the Attorneys General, and will be carefully monitoring their progress and evaluating their findings. We will continue to welcome new information that comes to us directly or otherwise becomes available. If there were concrete evidence that could be independently verified that ExxonMobil is communicating scientific misinformation, then that evidence would be cause for the Board to reconsider our decision regarding acceptance of their sponsorship. We define concrete evidence as documentation that is either publicly accessible (such as online or published material of an organization); a direct quote in full context from someone at ExxonMobil that demonstrates an official connection to misinformation about science; or non-public and independently verifiable material that has been collected by a disinterested, unbiased source, such as via a legal investigation or academic study.” (emphasis added)

In other words, AGU is saying what just about everyone has said about the #ExxonKnew campaign: they do not have “concrete evidence” to back up their claims. AGU evendoubled down by noting that this decision to keep working with Exxon is the best reflection of the organization’s goal of fostering scientific dialogue:

“AGU has always valued open dialogue and exchange of ideas, and we believe this decision best reflects AGU’s unique value to the scientific community: our ability to convene scientists of diverse views and from different backgrounds, disciplines, and industries.”

Read between the lines and fostering “open dialogue and exchange of ideas” stands in stark contrast with stifling of speech and research, which the #ExxonKnew campaign has made its hallmark.

That wasn’t the only blow to the #ExxonKnew activists over the past few days. NewFIOA’d emails released by Energy & Environmental Legal Institute (E&E Legal) show that just a few weeks after Delaware Attorney General Matthew Denn (D) agreed to sign on to the Common Interest Agreement – which would keep their proceedings on the ExxonMobil investigations secret – he suddenly pulled out, telling the other AGs that he would no longer be participating.

In an April 21, 2016 email, Delaware was included among the AG’s that had signed the agreement:

On May 9, the Vermont AG’s office, following the protocol of their Common Interest Agreement, which requires that the offices notify the group if they receive public records requests, wrote the AGs to let them know that they had received such a request:

That evening, Delaware Deputy Attorney General Ralph Durstein contacted his fellow AGs’ offices to inform them that “Our AG has determined that Delaware will not be involved in this worthy effort, and thus will not be signing the common interest agreement.” 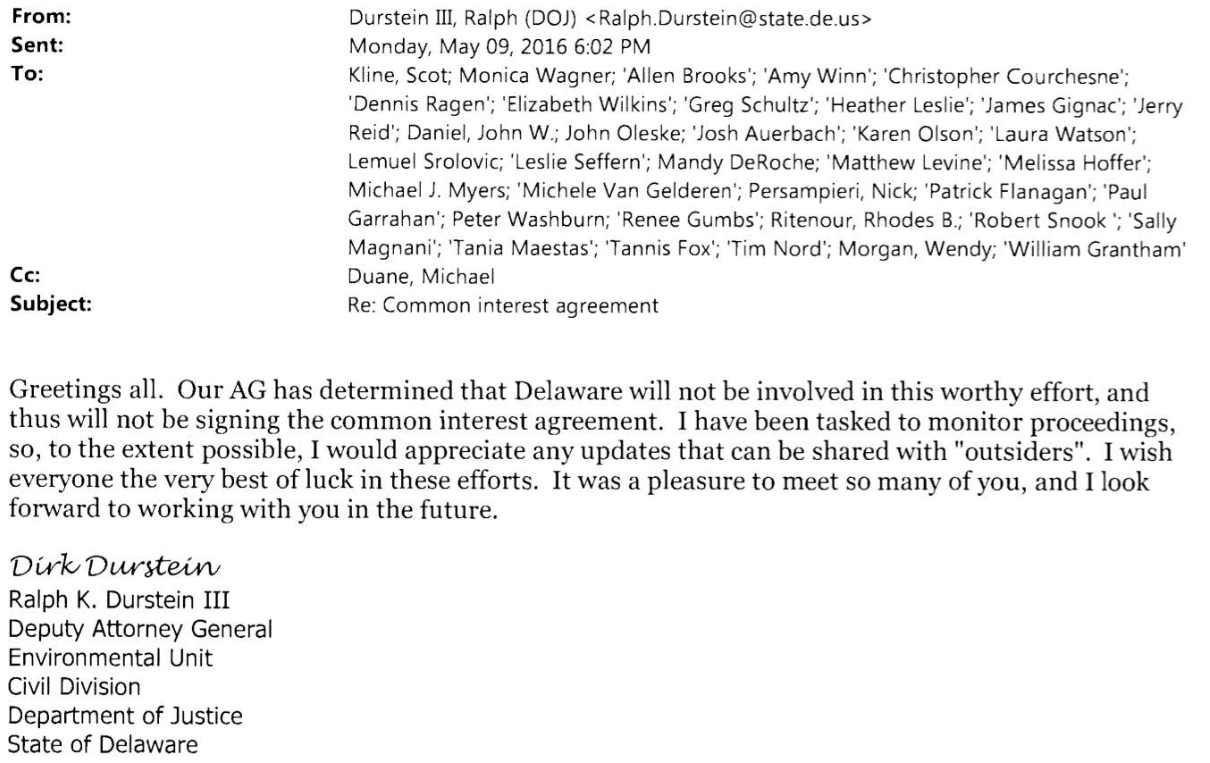 The news of AGU sticking to its guns and Delaware pulling out comes just after Politicoreported that billionaire environmental activist Tom Steyer – who had been aggressively pushing the #ExxonKnew campaign, even hosting a rally demanding New Hampshire Attorney General Joseph Foster launch his own investigation into Exxon – suddenly changed his tune, completely disavowing the entire campaign. As Steyer said, “We’re definitely not pushing this thing. We are not part of this effort.”

It also comes after other emails revealed that the AGs in New York Attorney General Eric Schneiderman’s climate coalition called him a “wild card” and said being associated with his investigation made them “nervous.” Now, with the SEC in the process of taking a look at how ExxonMobil assesses the value of its proven reserves – a move that the company welcomed as “appropriate” – many have said this is Schneiderman’s chance to quietly drop his investigation and let the professionals take it from here.

#ExxonKnew is so dead that just about everyone is running for the hills – maybe even Schneiderman himself.