India has become the center of the world’s oil demand growth and the country’s economic growth will affect global commodities, Citigroup Inc. said in a research note.

The world’s second-largest country by population after China will see its economy expand at about 8 percent a year through 2021, Citi researchers including Ed Morse said. The country’s working-age population will increase by 220 million over the next 20 years, and about 240 million people will move to cities. 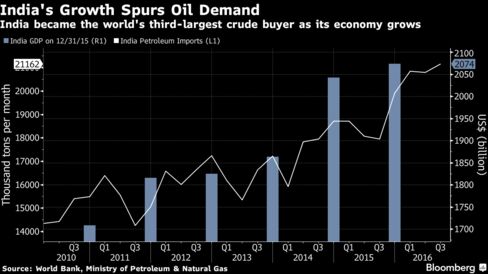 Urbanization and rising incomes will boost demand for transportation fuels, gold jewelry and electricity generation, while looser regulations should spur increased exports of iron ore into the market. India’s economy won’t copy China’s near-decade of double-digit economic growth that pushed oil prices into the $100-a-barrel range, but will be enough to impact global supply-and-demand balances of several commodities, Morse said.

“While India is no China, the sub-continent’s largest economy is becoming the third largest oil consumer and importer of oil, with a tangible impact on oil, coal and iron ore markets, less so on metals,” Morse said. “As India’s base rises, so too should its global commodities’ impacts.”

Citi expects 2016 to be the best in four years for commodity investments. The Bloomberg Commodity Index is up 7.4 percent this year. Oil, zinc, copper and soft commodities will be the best investments in 2017, with Brent crude seen averaging $60 a barrel after ending this year around $50.

India’s crude demand has grown by 350,000 barrels a day this year, higher than China, as the country surpassed Japan to be the world’s third-largest oil buyer. Gasoline demand has risen 14 percent this year and should continue to increase at double-digit rates as car and motorcycle purchases climb, Morse said. 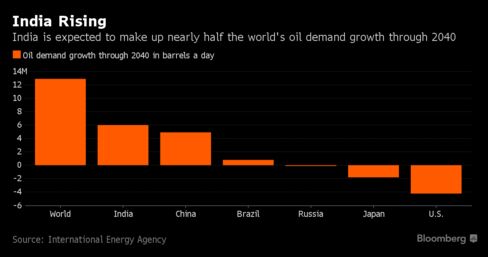 Coal demand will grow between 6 percent and 8 percent a year through 2020 as the country tries to electrify more rural areas. Domestic production of coal for power will rise even faster, reducing imports, while a strong domestic steel-production outlook means the nation will have to increase metallurgical coal imports.

The second graph is particularly, illustrating how global oil demand will continue growing through 2040, fuelled by India and China.

Oil production last year amounted to 91 million barrels a day, so, according to the IEA figures, we are looking at something like a 15% increase by 2040.

“Experts” like Mark Carney and Ambrose Evans-Pritchard tell us that oil will soon become a stranded asset.

Source: Not A Lot Of People Know That