A 1 in 10 year storm event is expected to hit Northern California this weekend. Rainfall totals could easily be twice the average precipitation for January.

An atmospheric river will take aim with heavy precipitation, high snow levels and soils that are already saturated from recent storms. Precipitation starts Saturday, but the brunt of the storm will be Sunday & Monday. Forecasters say this will exceed stream and river flood levels last seen in 2005.

Snowfall ahead of the storm will be significant, then likely melt with the second warmer event Sunday:

Rainfall amounts over the weekend are likely to be heavy in the Sierra Nevada Foothills and higher mountain areas.

This is going to be some of the more significant flooding we’ve seen in the past decade. Areas may flood that haven’t seen impacts for several years.

According to Dr. Ryan Maue:

Unfortunately, California’s outdated reservoir system will likely not capture but a fraction of that water for later use.

From the NWS Sacramento Forecast Discussion:

Deep atmospheric moisture becomes focused over the Northern California Sunday resulting in periods of moderate to heavy rain with snow levels
above 8000 feet. Flood watch in place to cover potential flooding of urban areas, small streams and creeks, and unregulated rivers in the foothills and West Slopes of the Sierra Nevada, such as the Cosumnes. Heaviest precipitation appears to be focused over southern portions of the Sacramento Valley and Northern San Joaquin Valley, Motherlode, and Sierra Nevada Sunday into Sunday night. Models point to a second atmospheric river setting up over the area Tuesday into Wednesday with more significant precip. Have expanded the Flood Watch to include this.

Heavy precip looks to continue along the Motherlode and West Slopes of the Sierra Nevada Monday morning with lighter precip elsewhere across the CWA. Storm QPF Saturday through Monday ranges from 2 to 6 inches in the Central Valley, 3 to 8 inches in the foothills and Coastal/Shasta mountains, and 7 to 14 inches for the Western Plumas mountains and Sierra Nevada. Precipitation amounts this high have not been seen since the storms of December 2005 and could surpass the average monthly total for many areas.

Wet pattern continues into the extended period as the next land- falling moisture plume moves into Norcal on Tue, to be followed by another plume on Thu. Precipitation lingers on Wed as Norcal will be in between weather systems (TPW plumes). Slight ridging ahead of the approacing Eastern  Pacific trough is expected to shift the precip Northward onto the Northern CA coast with orographic effects prevailing over the Sierra on Tue. WAA ahead and associated with the moisture plume is expected to raise snow levels Tue/Tue nite. Then, a dip in snow levels Tue nite into Wed as the precip begins to diminish. Modest fluctuations in snow levels expected with a more modest moisture plume on Thu. With that said, snow levels are expected to remain below pass levels so this will be a couple of snowier weather systems with greater snow impacts, but less runoff. However, with rivers and streams still elevated from previous rains, additional rainfall over the foothills and Valley will continue the potential for flooding.

Click on the map to see temperature where you are, zoom in and out, turn the globe etc. (opens in a new window) 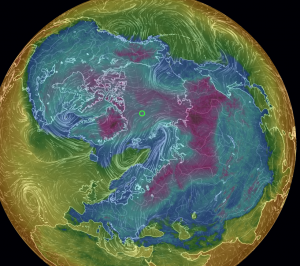