That is, for 2016, the Temperatures of Earth’s Atmosphere Nearest to Its Surface Were an Insignificant 0.02 Deg C Higher than the Previous El Niño-Related High in 1998.

With much less fanfare, Remote Sensing Systems (RSS) released their results for December 2016 yesterday. After converting the monthly data to annual anomalies, we can see that RSS lower troposphere temperature anomalies had similar results. That is, they too showed the RSS global lower troposphere temperature anomaly for 2016 was only 0.02 deg C higher than in 1998. (Monthly data here.) See Figure 2.

Another curiosity: the December 2016 and December 1998 values are remarkably similar.

Global lower troposphere temperature anomalies should be lower in 2017 than in 2016 due to the lagged global temperature response to the decay of the 2015/16 El Nino, but the drop will likely not be as significant as the one that happened from 1998 to 1999. Why? See Figure 4. There was a moderately strong La Niña in 1998/99, where weak La Niña to ENSO-neutral conditions exist now.

Summer Snows in both Chile and Australia are not normal, this follows records snows in Sapporo and record cold across the Northern Hemisphere. Tallest waves ever recorded and more gigantic volcanic eruptions in Russia’s far east. 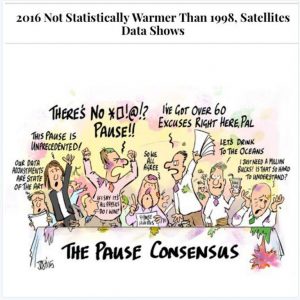