The Global Warming Policy Foundation (GWPF) has made a formal complaint to the BBC about the series of gross inaccuracies in its recent documentary Climate Change: The Facts.

As wags have quipped, the programme presented by Sir David Attenborough was so riddled with errors it really should have been called Climate: Change The Facts.

Now the GWPF has written to the BBC Complaints department listing just a few of them. The letter can be read here.

According to the GPWF, the programme “went far beyond its remit to present the facts about climate change, instead broadcasting a highly politicised manifesto in favour of renewable energy and unjustified alarm.”

The programme highlighted suggestions that storms, floods, heatwaves and sea level rise are all rapidly getting worse as a result of climate change.

However, the best available data, published in the last few years by the Intergovernmental Panel on Climate Change (IPCC) and NASA, contradicts the BBC’s alarmist exaggeration of empirical evidence.

“Current datasets indicate no significant observed trends in global tropical cyclone frequency over the past century … No robust trends in annual numbers of tropical storms, hurricanes and major hurricanes counts have been identified over the past 100 years in the North Atlantic basin.”

In its more recent Special Report on Global Warming of 1.5°C, published in 2018, these findings were reconfirmed. It stated that

“There is low confidence due to limited evidence, however, that anthropogenic climate change has affected the frequency and the magnitude of floods. “

There is also no observational evidence that the rate of sea level rise is getting worse. NASA satellite data shows that since 1993, there has been an annual mean sea level rise of 3.3mm, with no significant level of acceleration in the last three decades.

Suggestions by David Attenborough and Michael Mann that climate change is causing increases in wildfires in the US and globally are also misleading and not supported by any empirical evidence.

According to a survey published by the Royal Society the global area burned has actually declined over past decades, and there is increasing evidence to suggest that there is less fire in the global landscape today than centuries ago. These are vitally important facts that should have been mentioned if an accurate description of the impact of climate change on wildfires was to be maintained.

This is the second #fakenews scandal to embroil Sir David Attenborough in the space of a fortnight. Earlier this month, another Attenborough documentary — Our Planet on Netflix — was accused of misrepresenting footage of walruses tumbling to their deaths over a cliff. Attenborough claimed on the voiceover that this had been caused by “climate change” and the melting of the sea ice on which the walruses hunted for food. But evidence has since emerged that it wasn’t climate change which killed the walruses but rather a combination of marauding polar bears and the Netflix film crew whose activities may have scared the tusked, bewhiskered creatures to their doom.

The dishonest activist obviously has alternative motives for his propaganda .. 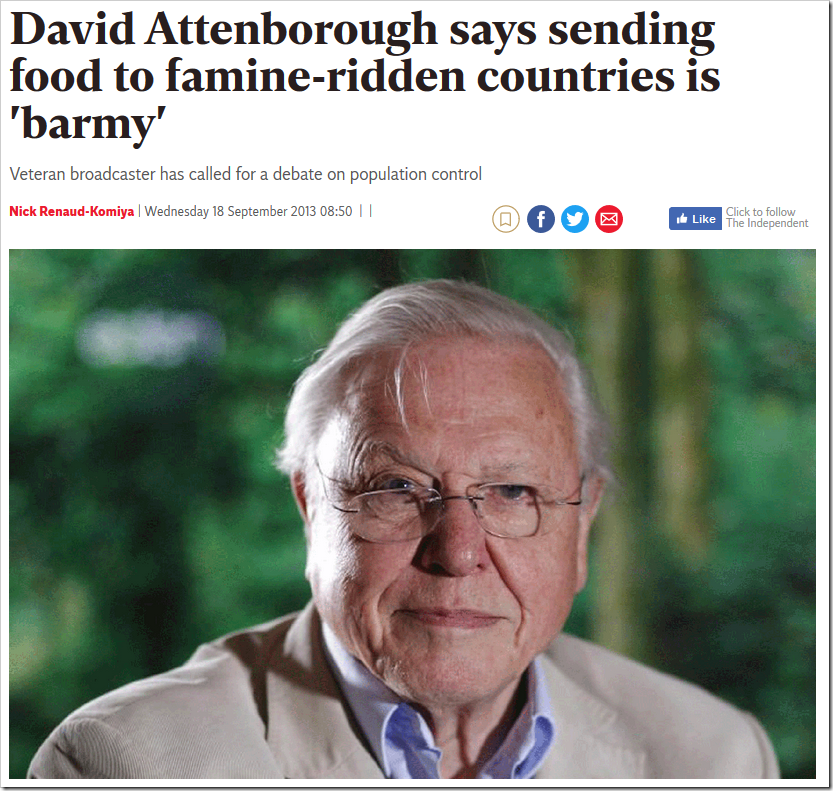 Sir David Attenborough has attacked the idea of sending food aid to countries enduring famine as “barmy” and has urged for more debate about population control, it has been reported.

The natural history broadcaster warned that the world was “heading for disaster” due to the threat of overpopulation, in comments made to the Daily Telegraph.

He said that unless human beings do not act soon the “natural world will do something”.

He added that the natural world has been doing it “for a long time” and more discussion is needed.

Raising the example of Ethiopia, Sir David said that the famine there was down to there being “too many people for too little piece of land”.

Speaking ahead of his new series David Attenborough’s Rise of Animals, he suggested that humans are “blinding ourselves” to the problem, claiming, “We say, get the United Nations to send them bags of flour. That’s barmy”.